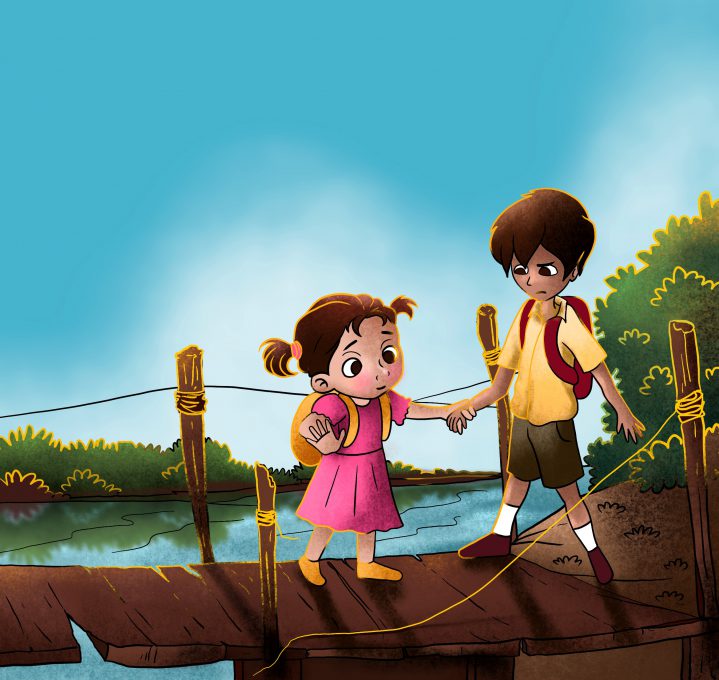 Aman and Anita were ready to go to school early in the morning. Their mother, Rama, quickly served them some bread with milk. They had their breakfast quickly and left for school with their bags.

“You’re her elder brother. You’re supposed to take care of her.”

They both studied in a primary school in the village and went to school together.

Anita was a restless and fearless girl. She would actively participate in all kinds of activities at school.

There was a small lake on their way to school. The lake had a narrow, rickety bridge, which the villagers would use.

Even the schoolchildren crossed the lake using it. However, when they reached the lake today, the bridge was filled with water, which usually happened when it rained.

“The lake’s filled with water. How will we cross it? Let’s go back home,” said Aman.

“No, bhaiya! Our teachers will be annoyed. Let’s walk a little ahead and cross the lake using the other bridge.”

“What bridge? It’s an old tree, which fell down years ago. How will we walk on it?”

“The other villagers are using it. We should too.”

“Bhaiya! There’s nothing to be scared of. We’ll hold hands and walk over that tree,” said Anita encouraging him.

They walked to the tree, which the other villagers were using to cross the lake. Aman was still afraid.

Aman slowly got on to the tree and somehow managed to cross the lake. He heaved a sigh of relief when he reached the other side.

“Did you see that, Anita? I crossed the lake!”

“Of course, you’re so brave!” said Anita and they went to school.

The other children from the village had also managed to reach the school. By afternoon, the water level had receded and they returned home via the usual way.

Rama was waiting for them. “There you are, kids!”

“Did you know that the lake was full of water this morning? I grabbed Anita’s hand and crossed the lake by walking on the tree-bridge. Right, Anita?”

“Girls aren’t fearless at all. They’re always scared and take their brothers’ help to do everything. You crossed the lake today because Aman helped you,” said Rama.

Anita did not respond.

A week passed. It hardly rained and the lake did not fill up again. They walked to school as usual.

One day, on their way back from school, as they were about to cross the lake, Anita heard some noise from the bushes nearby. 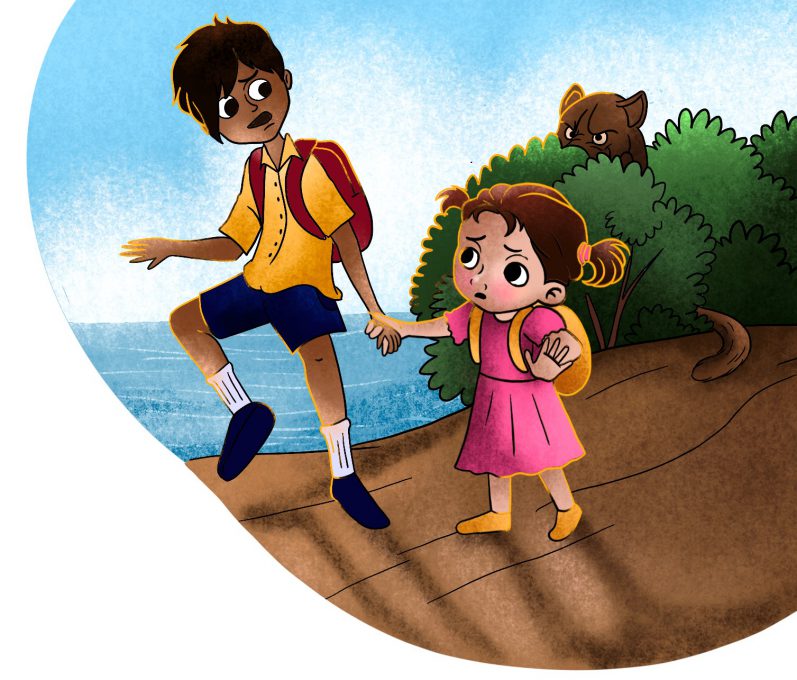 She said, “Wait, bhaiya! There’s something in the bushes.”

“I think an animal is hiding there.” Anita looked carefully and saw the tail of a leopard peeking out of the bushes.

“Look! You can see the tail of a leopard among the bushes. It’s waiting for a prey.”
Aman was terrified and was about run, but Anita grabbed his hand.

“Where are you going, bhaiya?” she whispered.

“If we run away, the leopard will chase us. Let’s wait here for some time.”

“I’m scared too, bhaiya. Look, our friends from school are also coming this way. We have to stop them.”

“We’ll stop them as we run,” suggested Aman.

“We may stop and save them, but this leopard can attack all of us. Even if we get saved, it could attack someone else.”

“I don’t understand! I’m going back!” said Aman and quietly walked away.

“Wait, bhaiya!”Anita followed him. They met their friends and said, “A leopard is hiding in the bushes ahead.”

“Why not? We should save ourselves,” said Sohan.

“We should also save others’ lives if we can. Let’s wait here. If we see someone approaching, we’ll stop them so that the leopard doesn’t attack them,” said Anita.

“Why should we be scared? There are so many of us. Let’s pick up stones. If the leopard comes out of the bushes, we’ll scare him, but make sure not to harm him for no reason,” said Anita. 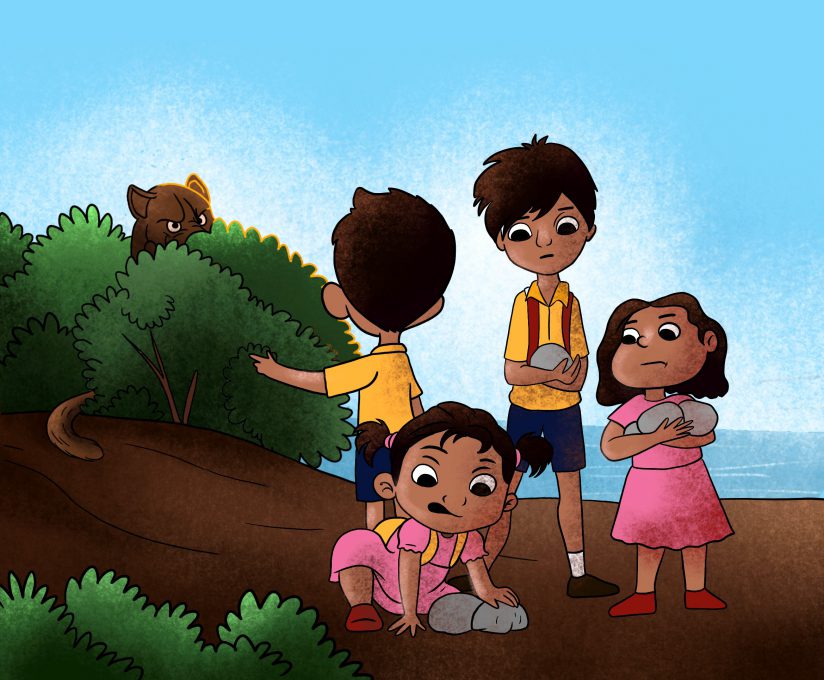 The others agreed. They picked up stones and held on to them.

They kept an eye on the leopard from afar. It was still waiting for someone to come closer. None of them took a
step forward.

Suddenly, their teacher came behind them. He asked, “Why are you all standing here?”

“We can’t go that way. We’ll go home through some other way,” said Aman.

“But we need to do something about the leopard or someone will get attacked.”
“Anita’s right! We have to scare the leopard off. We shouldn’t run away. If we just find another way to go home, the leopard will attack someone else,” said their teacher.

Everyone agreed. The teacher took a stick in his hand and walked ahead. Anita walked right behind him and the others followed her sheepishly. 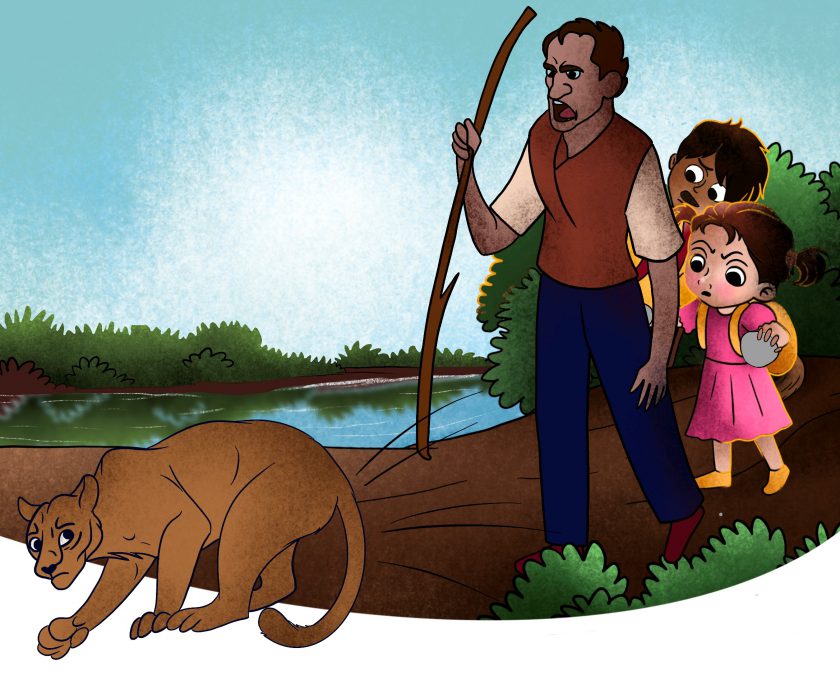 Their teacher said, “Throw the stones near the bush and scream all at once.
The leopard will run away hearing the commotion.”

The children threw stones near the bush and screamed together. The leopard came out of its hiding and seeing the crowd, it ran away into the jungle. They all finally breathed a sigh of relief.

“Sir, you are the one who taught us that we shouldn’t run away from problems. We should face them,” said Anita.

They reached home late that day. Anita did not say anything. It was Aman who praised her today.

“Mom! You should’ve been there!”

“What happened?” asked Mom and Aman narrated the whole story. He told her how Anita stopped them from running and how they all drove the leopard away.

“And it was Anita who did all this?” asked Mom surprised.

“Yes, Mom! I was scared. I couldn’t even speak. But she wasn’t scared at all.”

Rama hugged Anita and said, “You’re a brave girl, indeed. You’ve done what others were too scared to do.”

I love champak very very much means i am in absolutely love with it. its content is amazingly amazing. it not only gives us knowledge but also entertains us with great teachings of life. I love dadaji character as he gives superb information and it also promotes the family value and the place of elders in the house. love it. guys you are doing great work. keep it up.