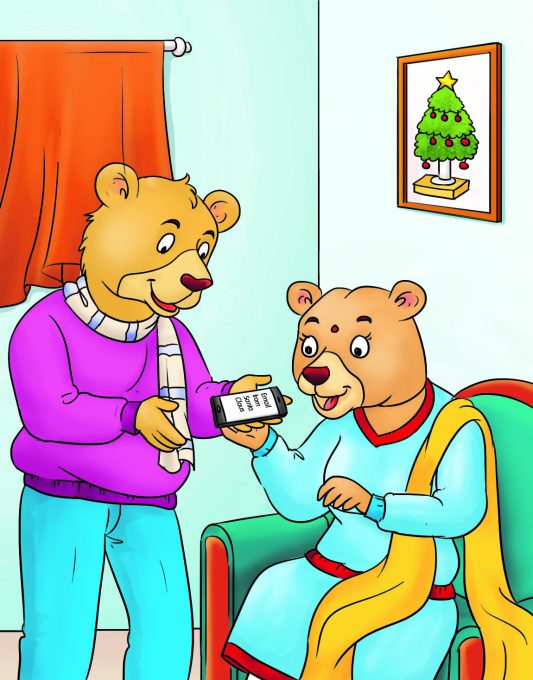 Bonny bear had saved every single penny to buy a new smartphone. Now that he had it, he couldn’t take his mind off it.

But he did not know how to use it and kept pressing random buttons.

“Ting Ting!” the email bell on his mobile rang. Bonny touched the bell and opened the email.

It read, ‘Email from Santa Claus.’ Since Bonny couldn’t read, he did not understand the text written in it.

He went to his wife and asked her to read it to him. “Wow! It seems like luck has finally started favouring us. It is an email from Santa Claus and it says that because of his old age, he will not be able to distribute gifts to everybody. Instead, he has decided to directly transfer money to the accounts of those chosen,” she said, reading the email.

Bonny jumped with joy when he heard this.

The news of receiving `50,000 in his account made him extremely happy.

“Let me go to Forest Bank and withdraw this money immediately and then we can celebrate our Christmas with this money,” he said and left.

“I wish to withdraw `50,000 deposited in my account,” he said to the clerk sitting at the cash counter.

The clerk took his details and checked the account statement and politely said, “Sir, your account `100 in it. There are no new deposits.”

“That’s not true! You don’t know how to do your job; let me talk to your manager instead,” said Bonny, angrily and stomped his way to the manager’s cabin.

“Sir, how can I help you?” asked the manager. An angry Bonny demanded for the `50,000 deposited in his account.

“But your account does not have that much money; you could be mistaken,” said the manager, while cross-checking Bonny’s account.

Bonny couldn’t believe it. He then told the manager about the email he had received from Santa Claus.

“Tell me, why can’t you give me the money that Santa Claus has deposited in my account?” asked Bonny angrily.

“Now I understand,” said the bank manager. “Mr Bonny, such messages or emails are usually fake. I would suggest you ignore them lest you will suffer a great loss in the future,” he explained and got back to his work.

Baddy jackal, who was in the bank, had been observing Bonny for quite some time. 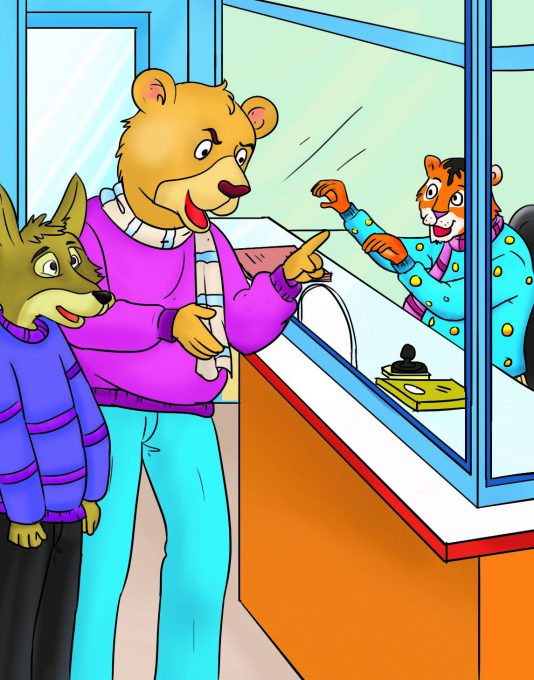 “Bonny, I heard what you just said and I totally agree with you. The people in
this bank do not want to work. If you want, I can help you. Come with me,” said Baddy.

Bonny was obsessed with the email that he had received from Santa Claus
and the money he had been gifted, so he immediately agreed to go along with Baddy.

“Your money has been deposited in the new Mangal Bank and not this bank. Let’s go there,” said Baddy. Bonny was happy to hear that and went along.

They reached the bank and they met with the manager.

Bonny did not have the money and wasn’t sure what to do. He got an idea and went to his friend Leo leopard to borrow the money. He promised Leo that he would return the money the next day.

“Santa Claus has gifted small amounts of money in other accounts. But you are very lucky that he gifted you `50,000. Since it is such a big amount, I suggest you go home. We will arrange for your money and bring it over to your house,” said the manager.

“How can I trust that you won’t run away with my money?” asked Bonny, now a little suspicious.

“We are Santa’s helpers. This money has come to you directly from Santa so, if
we run away with it, he will find and punish us. You should go home without any worry in your mind. You will definitely get your money,” said the manager. Bonny believed them and went home happily to share the news with his wife.

Next day, Bonny still hadn’t received the `50,000 and when he went to Mangal Bank, it was shut and no one was there.

The next day, Leo walked into his house and roared to get his money back.

Bonny had to sell some of his belongings to return Leo’s money.

As Bonny was explaining to Leo that he will return his money in instalments, there was another notification on his mobile. 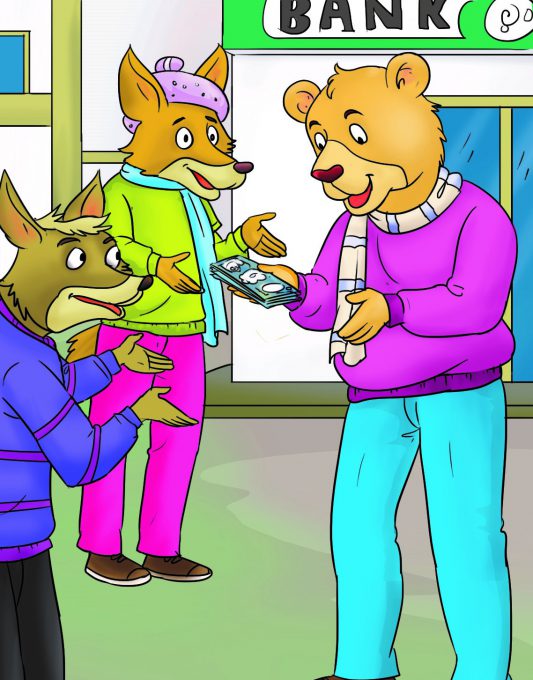 Bonny now realised that these messages were to make fools of people and rob them of their money.