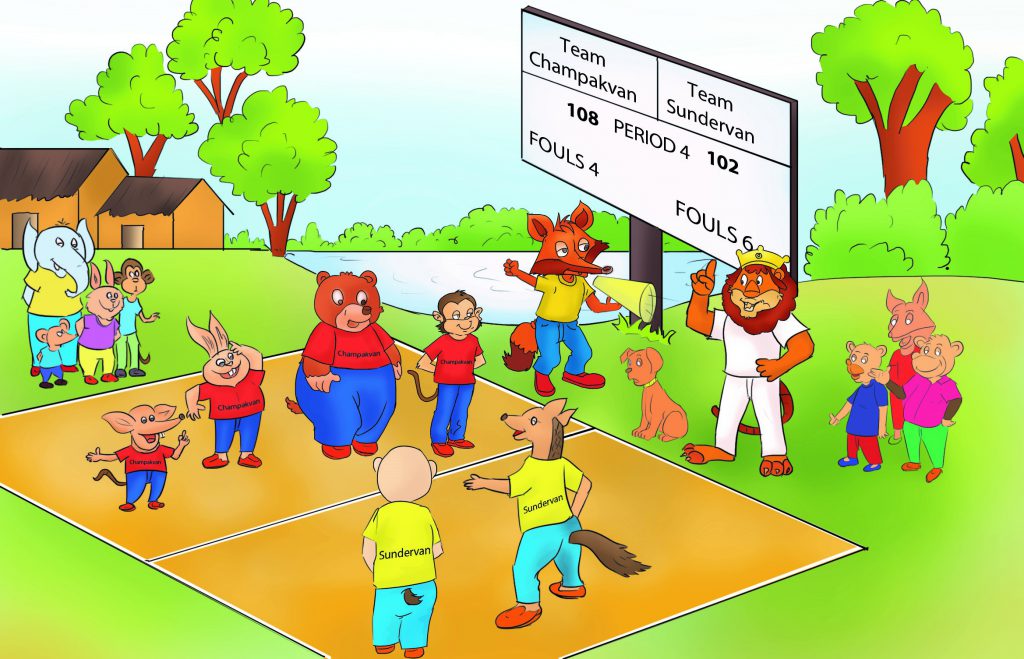 The audience held onto their seats as tension escalated at the kabaddi match that was being played in the forest.

“With only a minute left for this match to end, team Harivan is leading by 3 points. Team Sundervan has to score at least 4 points in their last raid if
they want to win this match,” said the commentator, increasing
the tension.

Team Harivan jumped to joy as a wave of cheer spread among the residents.
“We did it! I am confident if we play like this, we will win the gold medal this year,” said Gracy rabbit, the Harivan team captain.

“But what will happen if team Kandyvan wins the semi-final match? We won’t stand a chance against them in the finals. They have some of the best kabaddi players I have seen,” said Marty mouse, nervously.

“Hey Marty, why should we worry about who wins the other semi-finals. We
should concentrate on our own game.

We are great players too. That’s why we have won so many matches,” said Jojo monkey, confidently.

“I don’t think you have seen Kandyvan’s raider Ellie elephant play otherwise you wouldn’t be so casual about it. There is no chance of any other team winning against her,” said Marty, feeling hopeless.

“You are right, we totally forgot about Ellie. She can defeat an entire team on her own,” said Browny bear.

“Don’t lose hope, guys! Look at us as a team and how strong we are together. We will give the final match our best shot, even if we don’t win,” said Gracy, trying to motivate them. She, too, was worried about Ellie but didn’t want the team to lose hope.

“I hope team Kandyvan loses the semi-finals so that we don’t have to play against them at all,” said Marty.

“Let’s just prepare for the next match,” said Gracy, changing the topic.
They all went up to their hotel rooms. After some time, they got the news that team Kandyvan had won the semi-finals against team Chandanvan by 50 points.

“How could anybody defeat a team by so many points?” said Browny, shocked.

“It was because of Ellie,” said Gracy with a heavy voice.

“Ellie!” They all said in a chorus.

“Yes, I watched the semi-finals. Ellie raided team Chandanvan and when their players tried to catch her, she dragged the entire team to her side of the court, thus tagging the entire opponent’s team,” Gracy said dejectedly.

“We should go back,” said Marty.

“Go back, where?” Everyone was taken aback by Marty’s statement.

“Back to our homes. There is no chance of us winning the finals,” said Marty, lowering his head and voice.

“Marty, losing hope will not help us here and giving up at this stage after reaching the finals is not acceptable. I have thought of a game plan and each one of you will follow it. Marty, you have the most important role,” said Gracy, sternly.

“What kind of role?” he asked.

Gracy explained her game plan to the teammates.

“Is it a game plan or is it your plan to get me killed?” Marty asked nervously after hearing Gracy’s plan.

“Marty, you are small and swift. Only you can help us score. Whether Harivan wins the final title or not depends on you and only you,” said Gracy.

“Yes, Marty, none of us are as quick as you. This is the only way to avoid getting tagged by Ellie,” said Browny, trying to convince Marty who finally agreed.

Next day, Harivan and Kandyvan teams stood facing each other. Team Harivan won the toss and decided to raid first.

“Marty, remember what you have to do?” whispered Gracy.

“Yes, I will go the opponent’s side of the court and run back quickly,” Marty replied.

“You don’t have to just run back, you have to tag their players and then come back! It will be great if you manage to tag Ellie,” Gracy explained. 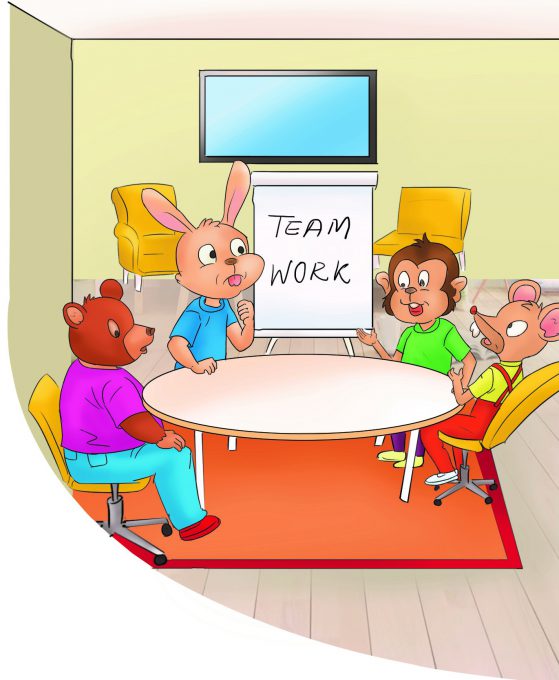 Ellie tried to catch Marty, but he quickly ran between her legs and reached the other players.

“Come here, you tiny mouse! I would have gulped you down if it were not for the match,” said Bunty cat, licking his lips.

Marty was frightened by the cats’ threat and he ran back towards his side of the court. On his way back, he bumped into three players of the defending team, including Ellie.

When Marty reached his side of the court, his teammates were all praises for him. “Great, Marty, you have done a wonderful job, you even tagged Ellie,” they said excitedly.

In the meanwhile, Bunty from the opponent’s team came to their side to raid. As soon as he tried to tag Marty, Browny and the others tackled him.

Team Harivan was leading by quite a few points.

Whenever Ellie came to raid, the players avoided tackling her and just saved themselves from getting tagged by her. They did not allow Ellie to score any points throughout the match.

Their best player’s poor performance soon demotivated Kandyvan’s team and as a result, they lost the match to Harivan scoring 17 points against 32.

“Hurray, we won the match,” cried team Harivan with joy.

“While we all played well, Marty should be thanked for showing courage at the beginning of the match,” said Gracy.

Marty stood among them with pride but as soon as he saw Bunty staring at him, he quickly hid behind Browny. 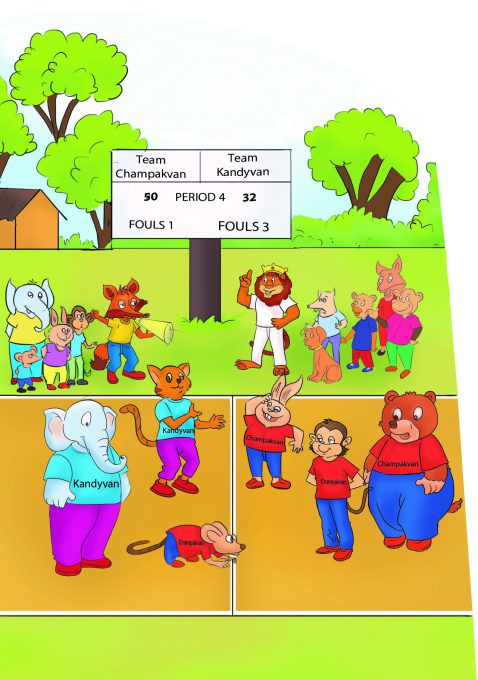