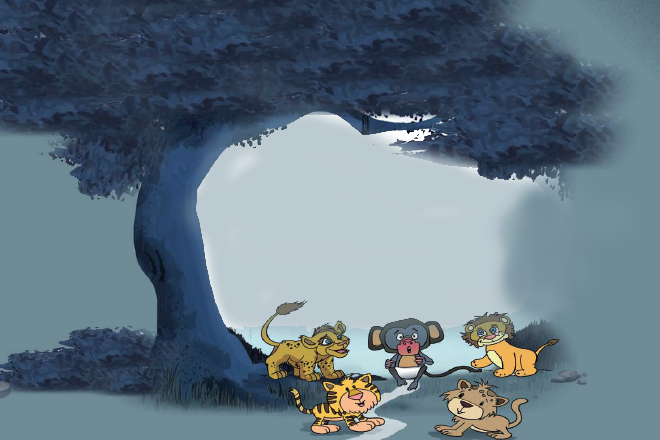 The atmosphere at Feline colony was filled with energy. Everyone was excited because a new family had just moved in – Mr. Moseng, the baboon, his wife and their son Joram. The entire colony lined up to meet them and help them settle in.

One evening, Joram’s mother suggested, “Joram, why don’t you go outside and play with the other kids?”

Joram stepped outside and approached the kids. When they saw Joram walking towards them, they all surrounded him. They hadn’t seen anyone who looked like him.

THE PROMISE OF FRIENDSHIP

“Hi, my name is Joram. Can I play with you?” asked Joram feeling a little uncomfortable.

“Why are you so tiny?” asked one of the children.

“I think he’s a dwarf,” said another.

“Look how long his snout is,” said a third.

“He looks so weird!”

“What did you say your name was again?” asked a leopard cub named Sonu.

Immediately, Sonu started laughing and all the other kids joined in. Joram didn’t like the fact that they were laughing at him but he remained quiet. After playing for some time, they all went back home. The next day, Joram stepped out to play with the other kids in the colony. When Sonu saw him approach them, he began shouting “Look, the weirdo is here! Run!”

All the children ran away laughing and Joram was left all alone. Feeling sad, he went back home and stopped trying to be friends with them. One day, Sonu saw Joram eating bananas. He jumped at the opportunity and made fun of him. When Joram saw everybody around him laughing he felt very bad and ran away.

Time passed and a fair was put up in Feline colony. All the kids from the colony were having a great time playing on the rides. When Sonu and his friends were playing on the swing, Sonu slipped and fell down. He was badly hurt. Joram, who had seen this happen immediately rushed to his help. He cleaned his wounds and took him to a doctor. Sonu was very surprised that Joram helped him even though he had been mean to him all this time.

Sonu told his grandfather about how Joram had helped him despite giving him a tough time. His grandfather first scolded him. “What you did was wrong, Sonu. Just because Joram looks different doesn’t mean that you can make fun of him. I want you to go apologize and I want you to thank him for helping you when you were in need.” |

“But will he accept my apology?” asked Sonu.

“Of course he will. He has a big heart and he will definitely forgive you.” Sonu and his grandfather went to Joram’s house to apologize. Joram forgave Sonu in an instant and have him a big hug. From that day on, the two of them became the best of friends.