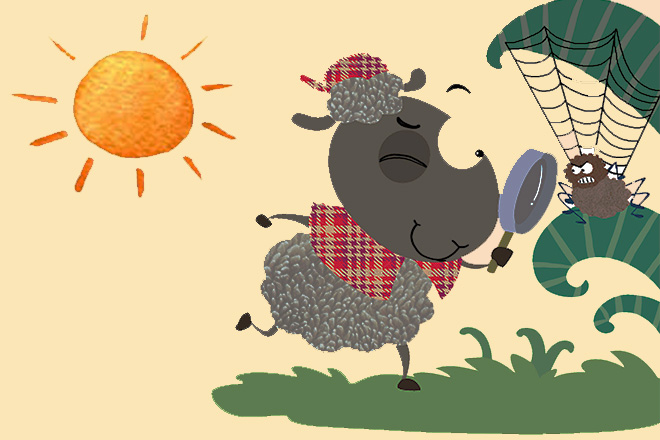 One day Ricky’s friend, Dipi said, “Hey Ricky, have you met our new neighbour? He is a big, strong wolf, but he is a gentle guy. I just met him myself.”

Ricky said, “Oh that’s nice,” but he wasn’t convinced. He had never heard of a wolf being kind to sheep. He decided to investigate by sneaking into the wolf’s home.

That night, Ricky decided that it was safe to enter the wolf’s home. He walked up to the front door, trying to be as quiet as possible when suddenly the door opened and out came the wolf. “Hi neighbour!” he said warmly. Ricky got startled by his sudden appearance and ran away.

“I wonder what’s up with him,” said the wolf and went back inside.

“Oh! I shouldn’t have tried the main door,” thought Ricky. “I will need to find another way to get in.”

The next night when the whole colony was asleep, Ricky got out of bed and walked up to the wolf’s house. He circled to the back of the house and climbed on to the roof.

As Ricky was about to drop down into the house through the skylight, the wolf entered the room.

“Aren’t you the sheep from last night? What are you doing here?” he asked.

Hearing the wolf’s voice, Ricky’s fleece stood on end. Ricky quickly climbed back up the skylight and ran away.

“I better keep an eye out for that one,” muttered the wolf to himself.

Ricky ran straight to his house and took a deep breath. “That was close,” he thought to himself. “I must find a safer way to sneak in.”

For two days Ricky made no move. Soon, he had a plan and was ready to investigate again. “Why not enter the house from the chimney?” thought Ricky. He waited in the bushes until all the lights went out. When it seemed like the wolf was finally asleep, he quickly climbed up on to the roof and slid down the chimney. He landed on something soft and suddenly, everything became very dark.

“I’ve got you now you thief!” said the wolf and quickly raised the alarm. All the sheep in the area came running.

When the lid was opened, Ricky realised that he had been trapped in a chest full of blankets.

“This sheep has been trying to sneak into my house. We must arrest him. Call the police!” said the wolf.

More From Champak: Woes of the New Coach

When the rest of the sheep explained that Ricky meant no harm, but did not trust that any wolf could be nice to sheep, he had started his own investigations to check up on the wolf. Hearing this, the wolf calmed down.

“You should be careful Ricky,” said the wolf. “You were fortunate that your friends could rescue you. Imagine what would have happened if they weren’t here to save you?”

“Trust me,” he added. “I really mean no harm. Because of my health problems, doctors have advised me to lead a simple life and not eat meat. Since fruits and vegetables weren’t easily available where I lived before, I moved here.” “You are welcome inside my home at any time Ricky. Just try knocking first,” he said, and all the sheep started laughing.

Ricky had learnt two valuable lessons that night. One was that snooping and sneaking isn’t a good thing and the other was that it’s wrong to make assumptions about other people before meeting them.