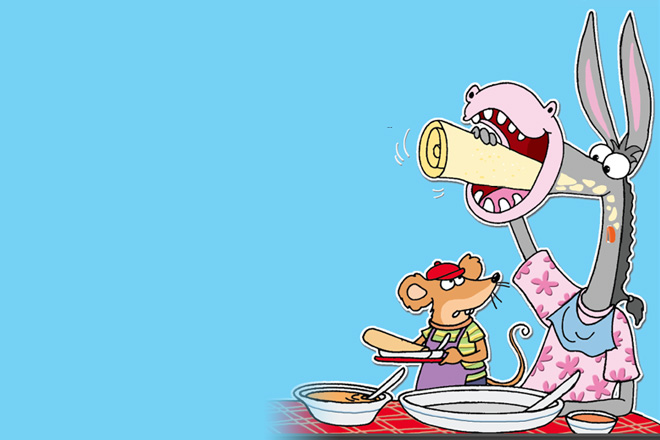 Damru, I’ll never take you to a party again. Everybody was laughing at you. I’m so ashamed,” shouted his mother Bekku. They had returned home after attending a party.

Earlier, at the function, before the other guests took their seats, Damru had emptied the large plate before him. He had swallowed the food in a jiffy. Everybody laughed when they watched him.

His mother often said, “Damru, you have bad eating habits. You never chew your food, but gulp it down. No wonder you have stomach aches.”

Next day was a holiday. Damru, as usual, dashed to Gokul, rabbit’s snack stall.

“I’m fed up of home food. What is today’s special?” he asked Gokul.

He placed a large paper dosa in front of him.

Damru ate the entire paper dosa in one big mouthful. When he got up Damru felt something sharp sticking inside his throat. “Ahhh!” he screamed.

Along with the paper dosa, he realised that he had swallowed a sharp object.

He ran around in search of a doctor. He found Wily’s clinic who claimed to be a doctor and rushed in. Inside, Dr. Wily, the wolf and his assistant Chirpy, the sparrow, were snoring. “Doctor, get up! Help me! My throat….it’s painful…” cried Damru.

Wily grumbled and got up. He peeped into Damru’s wide open mouth. “One minute! My…my… assistant can pull it out…” stammered sleepy Wily.

“Chirpy, peck his throat and remove the troublesome thing that is inside.”

Chirpy went on poking inside but was unable to remove the sharp object.

Dr. Jumbo listened to Damru’s complaint. “Doctor, the paper dosa I swallowed has caused this.” | He said, “Here’s what’s been pricking you. A tiny stick! You had swallowed it along with the paper dosa.”

“Ah! What a relief. I feel alright now,” Damru happily kicked his legs and went towards the door.

Dr. Jumbo said, “Stop! Don’t go before listening to these two important lessons. The first is to chew your food properly. Don’t swallow it whole. When you chew properly the food breaks down into smaller pieces and digests easily. If you had patiently munched the paper dosa the stick wouldn’t have entered your throat.”

More From Champak: The Pizza Girl

He added, “The second lesson is, when you are unwell don’t go to cheats who pretend to be doctors. Wily is not a doctor. Instead of curing your disease he’ll harm your body because he has no knowledge of diseases and medicines. So always seek the help of a qualified doctor.”

Damru nodded his head vigorously. He ran home to chew the pakoras made by his mother