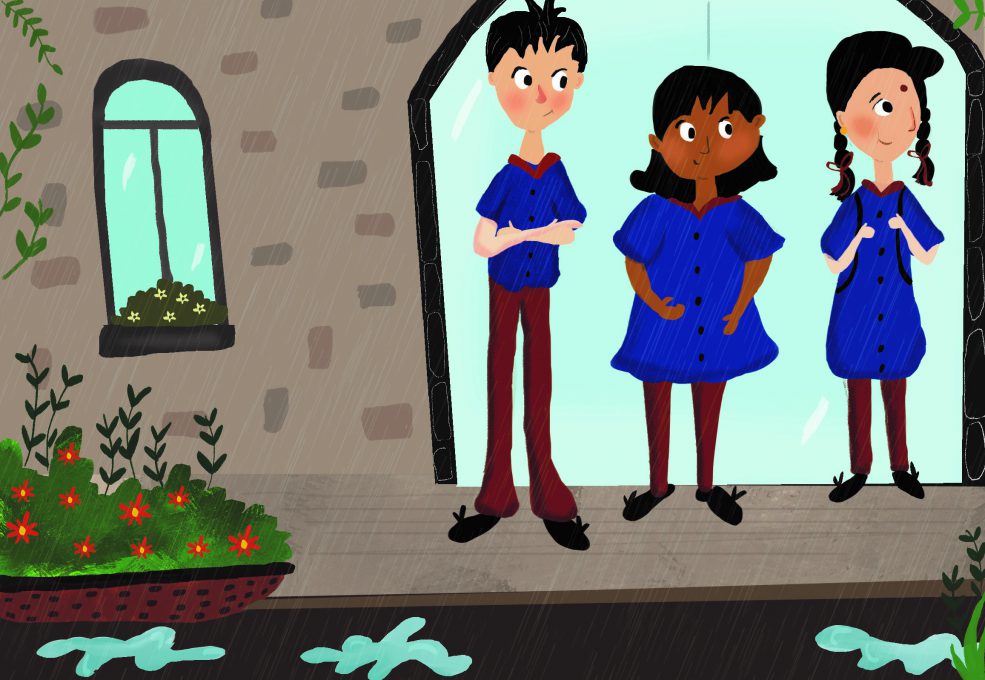 Heena, Salim and Krupa, grade 7 students, were good friends. It was a strange friendship as Heena had recently joined the school and was studious whereas Salim and Krupa were known for their pranks.

Most of the classmates didn’t like to hang out with Salim and Krupa as they kept getting into trouble.

Though the two never did anything to hurt anyone, their puckish attitude was not well-received and they would end up in trouble.

“I never wanted to steal your bicycle. I just wanted to make you go around searching for it.”

“I was just playing with your hair. I don’t know how they got entangled.”

“We forgot our textbooks hence, we took yours.”

These were some of their common pranks. Even though Heena never joined them in their pranks, she enjoyed them thoroughly. She was also victim of their pranks but knew they both were good at heart.

Their school annual day was around the corner. Heena, Salim and Krupa were participating in a singing competition and had to stay back after school for practice. Their parents were asked to pick them up once the practice was over.

One day, heavy rain and thunderstorm lashed the city. Most of the students had gone home while Heena, Salim and Krupa were still at practice.

By the time practice got over, their parents couldn’t come and pick them up as the roads could not be navigated.

The school principal received a call from them and he asked the trio to stay back in school for the night till the weather cleared out. They were given a classroom to sleep.

Krupa sat by the window watching the rain flood the streets.

Salim drew funny faces on the classroom board. Suddenly, he saw a shadow through the gap of the door. He peeped out and saw a few men walking through the corridor with some bags. Heena stood right behind him.

“What are these men doing in our school?” asked Heena.

“I don’t know. Look, they are entering the other classroom,” replied Salim.

“Salim, Heena, look here. The security guard was just given a bundle of notes by that man. Probably, he too belongs to that gang in the next room. This looks creepy, guys,” said Krupa.

“I will go and eavesdrop the conversation in the next classroom. You two stay here and tell me if you see anyone else entering the school,” said Salim as he stepped out of the class.

He walked towards the classroom where the men were and hid below the glass window in the corridor. He peeped and saw that the men stood in a circle and were talking. 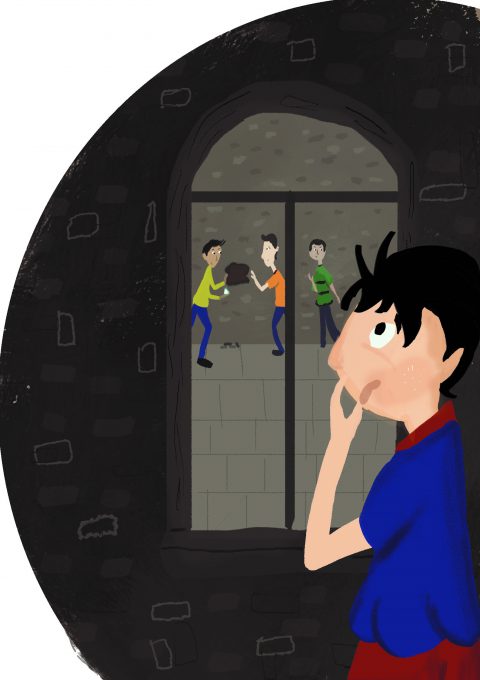 After some time, he saw the men remove some powdered packets from the bags and hide them in a vault inside the brick wall in the classroom. Once done, they covered the vault by placing the bricks back in their original position.

Salim went back to tell Heena and Krupa.

“What! We need to stop this,” said Krupa. Heena nodded.

“Why don’t we trap them here and call the principal?” asked Krupa.

“What do you mean?” countered Salim.

Krupa explained the plan to both of them.

She walked to the other classroom where the men were and latched the door from outside.

The men heard her footsteps and tried to open the door but couldn’t. Krupa quickly ran back to Salim and Heena. 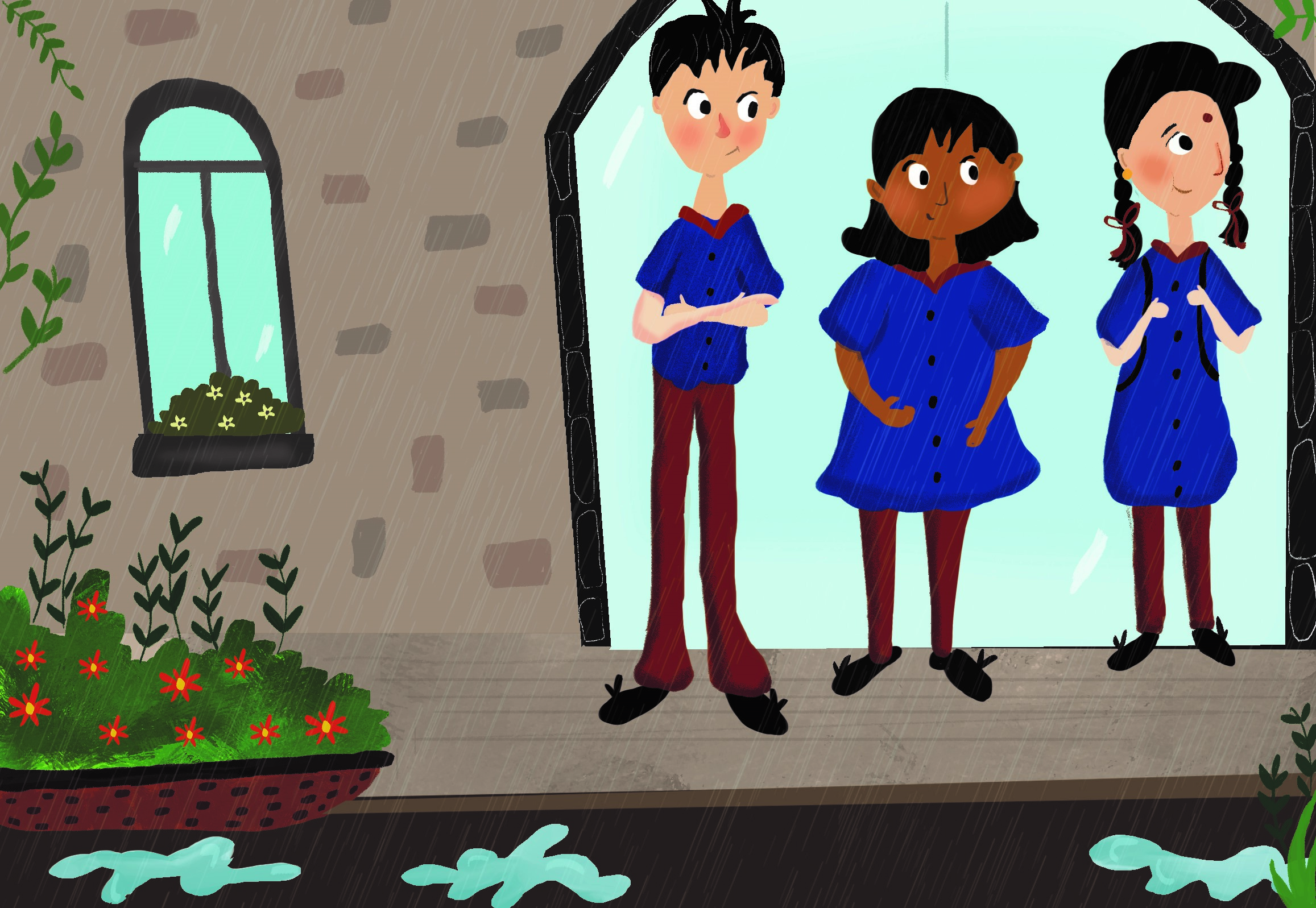 Heena said, “I called the principal and told him what we saw. He is calling the nearest police station and they will be here soon.”

The trio stood outside the classroom and kept a watch on the other room where the men were trapped. The men kept pushing the door but it didn’t open.

Soon, the sound of the police siren filled the air. The policemen along with the principal opened the locked classroom and handcuffed the men.

“Sir, these men have hidden some powder packets behind that wall,”
Salim announced.

“Yes, sir. The security guard is also involved. We saw him taking money from these men,” said Heena.

“Thank you so much, children, for capturing them inside the premises till we arrived,” said the senior police officer.

Their principal thanked them too and praised them for their bravery. 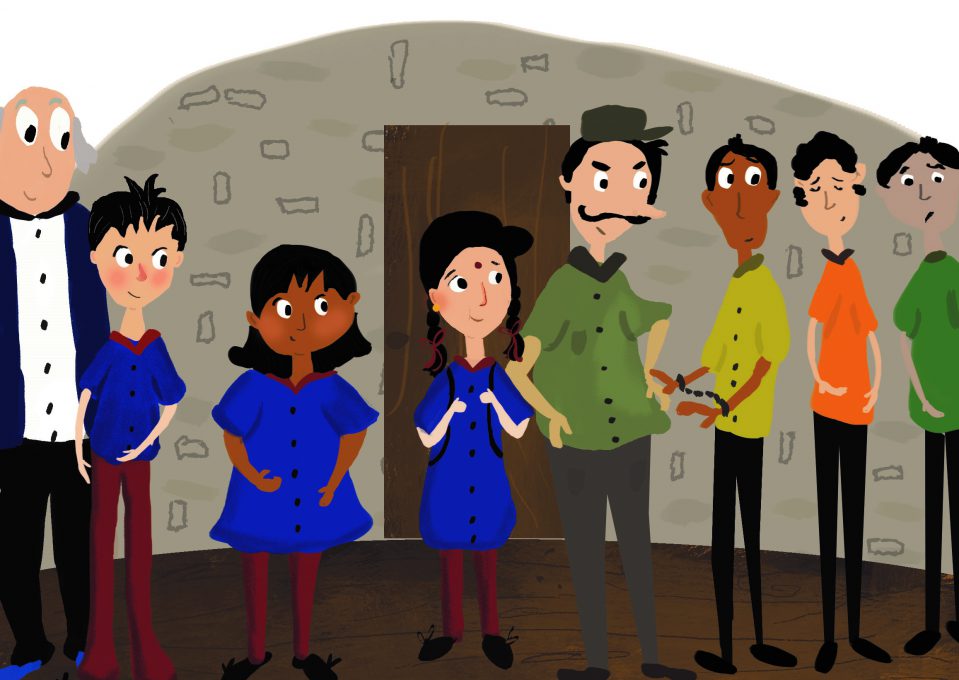 The next day in school, their story became popular.

From that year, they were recognised for their bravery and became the talk of the town