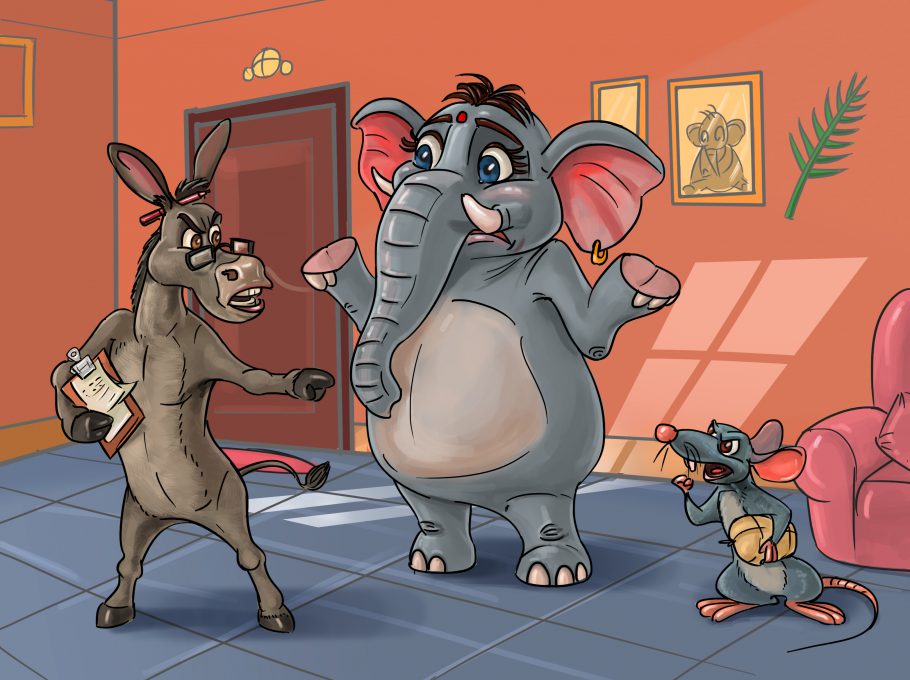 Dino donkey and Rinku rat worked at Ellie elephant’s shop. Rinku packed the items for the customers while Dino handled their bills and accounts. Neither Dino nor Rinku were happy with their jobs.

One fine morning, Dino and Rinku reached Ellie’s house to discuss their grievances.

“Sir, I’m tired of packing the goods and handing them over to the customers. From now on, I want to take the responsibility of handling the accounts,” said Rinku.

“So, you are tired now? Handle the accounts for one day, and you’ll realise how much attention and care it requires. Sir, I too want to exchange my duties,” said Dino, angrily.

“Look, it’s better if you keep doing what you have been doing for such a long time. You’ll find it hard to adapt to new responsibilities. The grass is always greener on the other side,” explained Ellie.

Ellie finally agreed. “All right, if that’s what you want! From now onwards,
Dino will pack the goods for the customers and Rinku will handle the accounts. Here’s the key. Go and open the shop. I’ll come soon.”

At the shop, Dino started packing the goods for the customers and Rinku started handling the accounts.

A while later, Matty monkey arrived at the shop. “Where’s Rinku? He’s the one who usually packs our goods!” he said, surprised.

“Do you want your goods or do you want to chitchat with Rinku? Tell me what you want and I’ll pack it for you at once,” said Dino, proudly.

“I want a bathing soap for monkeys, the one that softens the skin,” said Matty.

“Here you go!” said Dino and handed a bar of soap to him.

“What’s this? I asked for a bar of bath soap. This is a detergent soap. Do you want to ruin my good skin?” asked Matty, irritably.

“I’m sorry, that was a mistake,” said Dino and quickly fetched another soap.

“What’s this, now? This is a toilet soap. It seems you really want to damage my skin! I wonder where Rinku is. He would never make a mistake like this,” said Matty and left the shop angrily.

“Argh! He has no patience! If only he waited a little longer, I’d have given him the soap he wanted!” thought Dino.

Ellie was furious on seeing a customer leave the shop without purchasing anything. But since Dino had been working for him for a long time, he did not scold him.

Soon, other customers came into the shop and Dino got busy helping them.

Neither did Dino know where each item was stored inside the shop, nor did he have any idea about which items were available and which were not. He was taking too long to help each customer with their orders.

Most customers got irritated and started complaining because it took too long for Dino to fulfil their orders. Dino too was distressed. 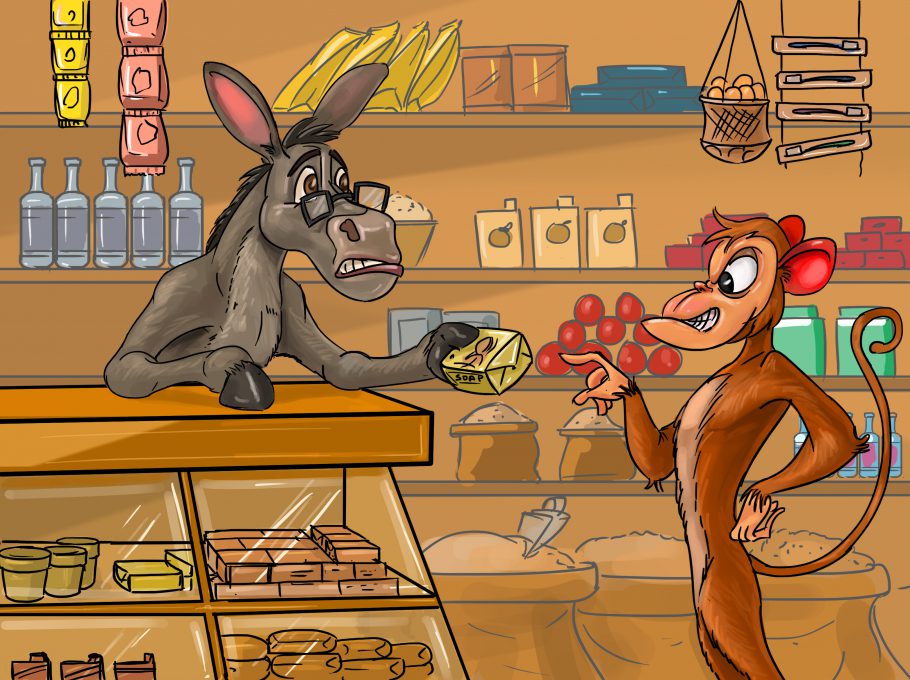 Meanwhile, since Rinku was poor in mathematics, he was barely managing the calculations for each order. And now with the commotion inside, he too started erring with the accounts. This distressed him too.

By late evening, both Dino and Rinku were frustrated with their new jobs and they realised that their old jobs were better.

They both wanted to revert to their original duties.

At night, after closing the shop, Dino and Rinku met outside.

“Why don’t we swap our jobs again and do the same things that we were doing earlier?” they both said together.

“Our previous jobs were best suited for us,” said Dino, and Rinku nodded in agreement.

Next morning, when Ellie elephant entered the shop, he smiled. He was happy to see Dino and Rinku doing their old jobs again.

“Didn’t I tell you that the grass is always greener on the other side? You both thought that the other’s job was easier, but that’s not the case!” said Ellie.