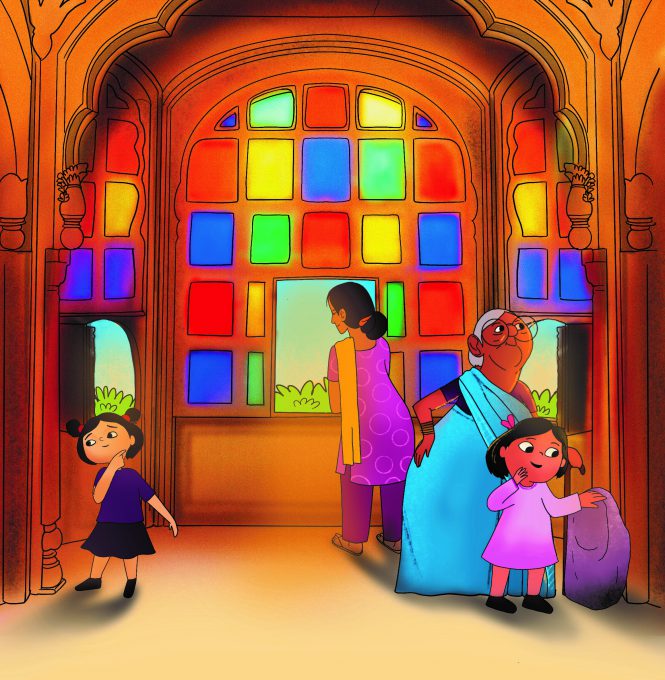 They saw the desert for the first time on the way. But Jaipur was green and not full of sand! The heat was sweltering, of course. Their grandma was overjoyed to meet them.

Grandma was not keeping well, but now she felt better. She said that seeing her them had improved her health. Sona and Mona spend most of their time with their grandma. 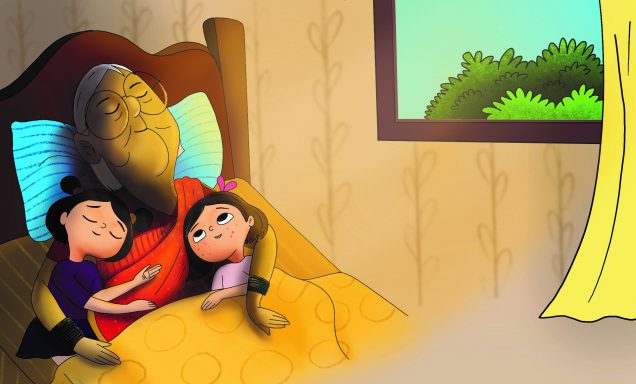 One day, the weather became extremely hot, and there was a power failure. Even the inverter in grandma’s house ran out of battery within a few hours.

There was no fan and no light inside the house. Sona and Mona who lived in the hills were finding this heat unbearable.

“It’s so hot, grandma! How did people survive in the olden days when there were no fans?” asked Sona, irritated with the heat.

Mona nodded and said, “They must have not been able to do anything.”

Grandma smiled and said, “It was never this hot in olden days. It’s getting hotter and hotter now because of increased pollution and population.”

“But still, how could they live inside houses in such weather? Today we have air conditioners, but there weren’t any in those days,” they said together.

Grandma thought for a while and then said, “Get ready! We’ll go somewhere!”

The girls were overjoyed to hear this. They were getting bored and restless sitting at home without electricity.

Grandpa took out the car from the garage and mom, dad, grandma, grandpa, Sona and Mona—all set off for the City Palace.

Through the window of the car they could see the pink gates, pink buildings, green Jaipur, the hustle bustle, people in colourful dresses. Sona and Mona were enjoying themselves. The City Palace was magnificent.

Grandpa bought tickets to the Hawa Mahal or the Palace of the Winds. 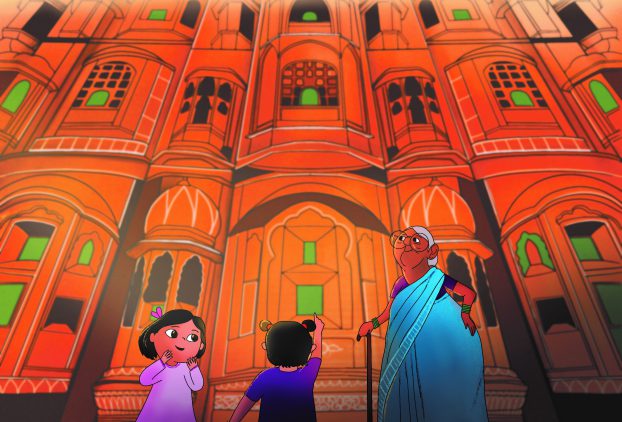 Grandma said, “We should have come here in the morning.”

“Why?” asked Sona and Mona.

“When the morning sunlight enters the palace, it looks beautiful. It’s a sight to behold,” said ma remembering visiting it as a child. She too was seeing the Hawa Mahal after many years.

Grandpa hired a guide, who told them that the Hawa Mahal was built in 1799 by Maharaja Sawai Pratap Singh. He was the grandson of Maharaja Sawai Jai Singh, who was the founder of Jaipur.

The city palace was inspired by the Khetri Mahal in Jhunjhunu, which was constructed by Maharaj Bhopal Singh.

As Sona and Mona walked through the palace, the guide described the monument. Hawa Mahal was five-storied and it did not have any staircase. People had to use the ramps to reach the floors.

It had 953 small windows or jharokhas, and small rooms from where the street could be observed.

Sona and Mona asked, “Why so many windows?”

The guide said, “It was meant for the royal women to observe everyday life and see the festivals celebrated in the street below without being seen. They had to obey the strict rules of the ‘purdah’ system, which forbade them to appear in public without covering their faces.”

“Lal Chand Ustad was the architect of this unique structure,” said the guide.

He showed them the interior designs and said, “The architecture reflects a fusion of Islamic Mughal architecture and Hindu Rajput architecture, evident from the floral patterns, fluted pillars, domed canopies, and arches.”

The Hawa Mahal was built like a honeycomb with small portholes.

Each porthole had miniature windows and carved sandstone grills, finials, and domes.

Sona and Mona were engrossed in the beauty of the architecture. Ma and grandma looked at the market below through the jharokhas. 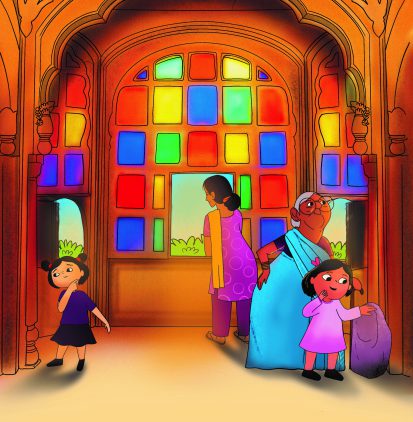 Sona looked at the stone slab and rubbed it.

The guide smiled and said, “That’s pink sandstone. It does not fade. It stays cool during summers and warm during winters.

It does not crack also easily so the palace was built with this stone.”

“But this is not a palace!” said Sona.

“Why then is it called ‘Hawa Mahal’?”

“The fifth floor was called the Hawa Mandir and thus it got the name ‘Hawa Mahal’,” said grandpa. “Also this palace is built right at the center of the market. From outside it looks just like a honeycomb. The air entering through the jharokhas cools down the insides, and so also it started being called the Hawa Mahal.”

Indeed, Sona and Mona did not feel hot at all while they were inside the palace. They were enjoying the cool wind.

Both were excited about seeing the Hawa Mahal. They were impressed how in the olden days, people found a way to beat the weather, safeguard the privacy of women, and create an architectural wonder.

The Hawa Mahal was a popular tourist spot in Rajasthan. And they were glad to have seen it.