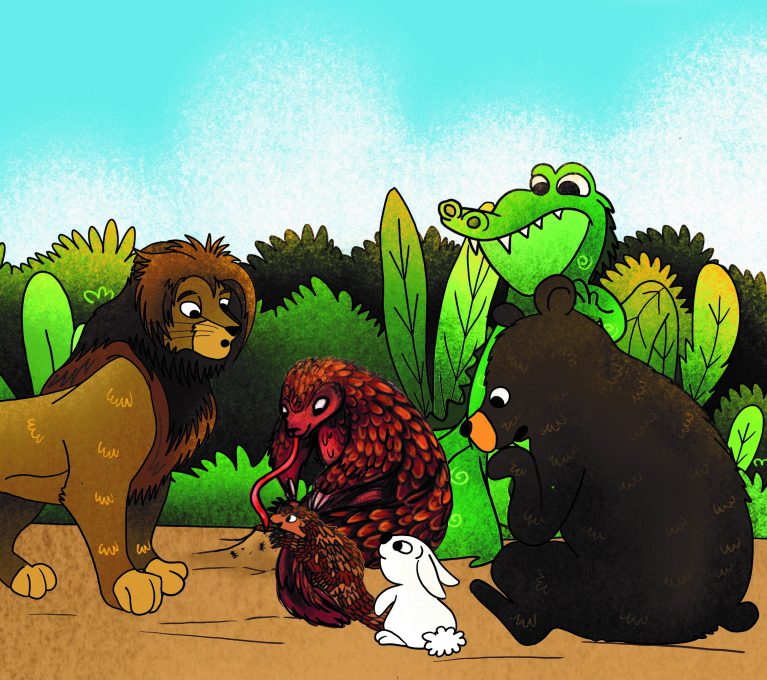 It was nighttime, when Lippy lion came running, muttering under his breath angrily.

He was also panting as he spoke.

Rinky rabbit heard him and asked, “What happened, Lippy? You look angry.”

Lippy roared, “Of course I am angry. I found two poachers near the edge of the jungle trying to enter the forest when they spotted me and ran away. I gave them a good chase and only when they drove off in their vehicle, I felt better.”

“What did they want?”

“They were talking about a Pangolin. Whatever that is!” said Lippy.

“Pangolins are shy, harmless mammals. They are also called scaly anteaters. But they like to be left alone and are not found here in our jungle. I heard they are found somewhere near the Himalayan foothills, which is very far away,” Rinky explained.

“Hmm… I haven’t seen one. Have you, Rinky?” asked Lippy curiously.

“No. But I am glad that you drove the poachers away. I guess they are gone forever,” replied Rinky.

“Hope so,” said someone softly from behind a bush. 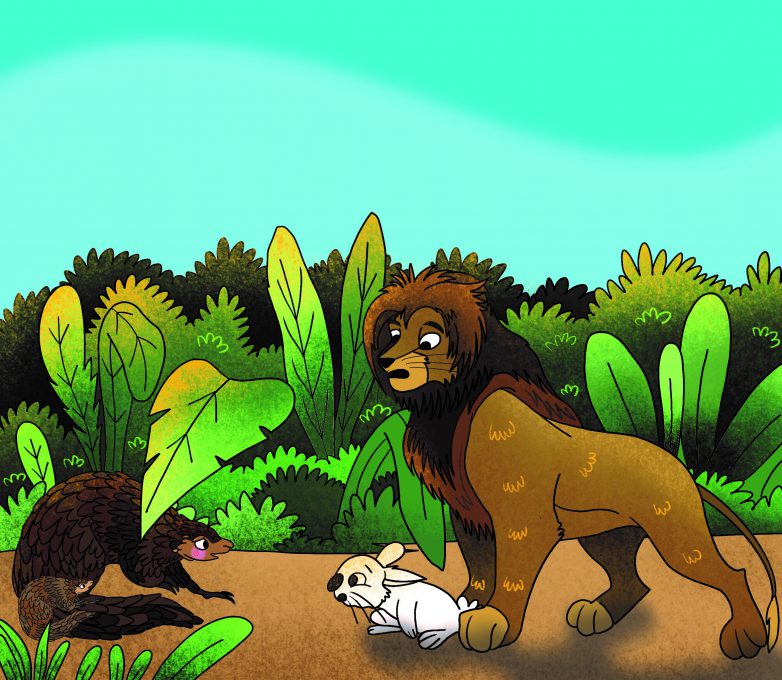 Startled, Rinky and Lippy looked around to find a strange animal, coming out from the bush towards them.

“Who are you? We have never seen you here before,” asked Lippy.

“I am the pangolin whom you were just talking about. My name is Pangy. I am looking for a safe place to live in India, away from poachers,” she introduced herself shyly.

Excited, Rinky and Lippy introduced themselves to Pangy.

They then noticed a baby pangolin riding on Pangy’s tail.

Following their eyes, Pangy introduced her baby with a tender smile, “That’s my two-month-old baby that we call a pangopup. I named her Pi.”

Rinky and Lippy smiled affectionately at Pi as she clutched onto her mother, looking at them.

After a while, Bobby bear who was looking for Rinky saw him talking to Pangy and Lippy. He greeted them all.

Turning around, Rinky introduced Pangy. “Hello, Bobby, meet Pangy pangolin
and her daughter Pi. They are new
around here.”

Bobby smiled at Pangy and Pi. “Pleased to meet you both. Where are you from, Pangy?” he asked,

“I am from Africa even though some
of my relatives live in parts of Asia,” replied Pangy.

“Wow! Interesting. So how do you like Sundervan?” asked Bobby who could not stop himself from asking Pangy one question after another.

“I am liking it,” said Pangy, shyly. “Rinky and Lippy have been kind and friendly,” she said and smiled.

“Well, please add me in the list of being your friend,” said Bobby, with a grin.

“Hey, your scales look more beautiful than mine!” Boomed a loud voice. 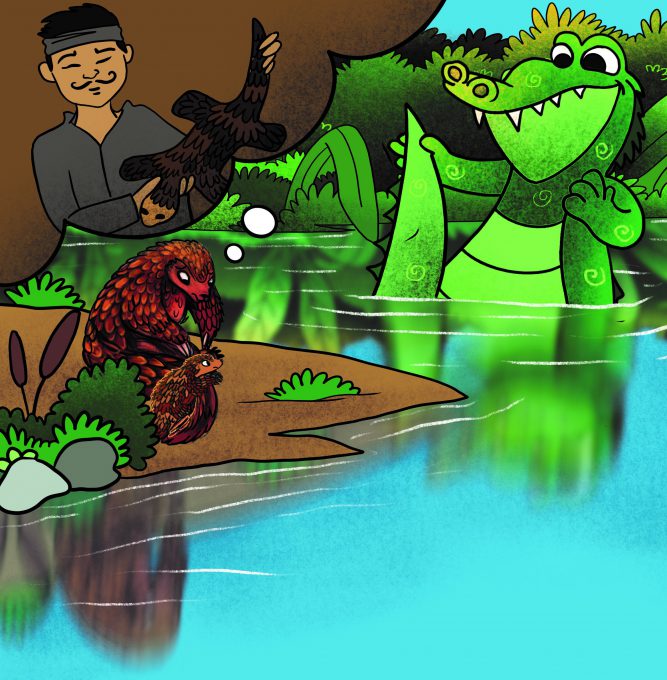 They all turned to see Crocky crocodile, walking towards them, admiring Pangy.
Pangy delighted with the compliment, said, “Thank you. My scales are made of keratin, which is the same protein found in hair and nails of human beings. Though our scales make us look beautiful, they are also a curse for our species as we are hunted for them. Our scales are used in making traditional Chinese medicines. We are also hunted for our meat, which is considered to be a delicacy in China and Vietnam.”

“How sad! Even I am poached for my skin! So, you see, you are not alone. Even the great Crocky is hunted by the poachers,” grinned crocky

“Crocky! How can joke and feel proud about it?” said Rinky horrified.

“Sorry, Rinky and Pangy. I simply wanted to tell Pangy that even I am an endangered species who is hunted for its skin.”

“What does endangered mean?” asked Lippy who had been quietly listening to everyone.

“Endangered means that only a few of us are left on Earth, and our species will not remain if humans don’t stop hunting us,’’ explained Pangy.

“Pangy, how do you escape from predators in that case? You look so harmless. Not like me, with big teeth and a strong tail,” asked Crocky.

“Well, when threatened, we roll ourselves into a tight ball protecting our soft, belly and babies with our scales. We let out a stinky fluid from a gland at the base of our tails as a defence that makes our predator run away,” Pangy explained. 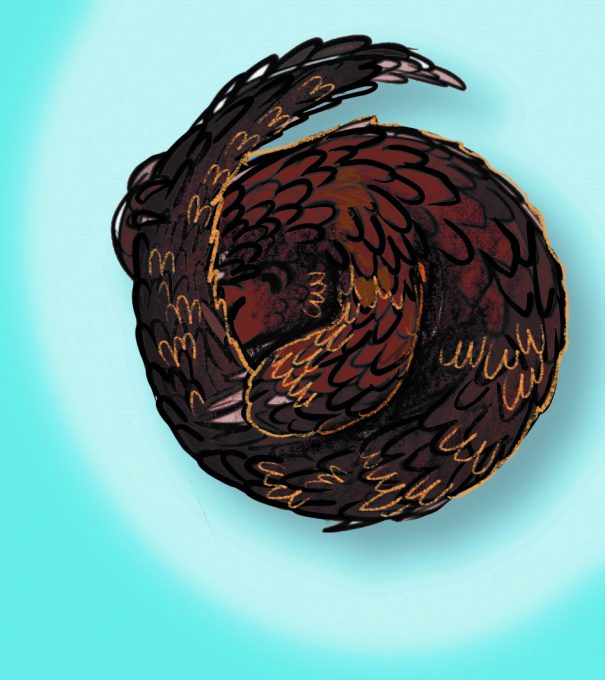 “Sounds great! We would love to invite you to dinner if you let us know what you like to eat?” asked Rinky.

“Thank you for the invitation, Rinky. We feast on ants and termites,” said Pangy.

Surprised, Bobby asked, “But how is that possible?”

“Pangolins, have long snouts and even longer tongues, which we use to reach ants and termites that we excavate from mounds with our powerful front claws. We close our noses and ears to keep ants out while we are eating,” said Pangy.

Lippy yawned and said, “I am tired. Don’t you all feel like turning in?”

“Pangolins are nocturnal so I feel wide awake. I will return to my burrow later,” said Pangy.

Crocky joked, “Guess you are like a nightguard, huh?”

“Along with the owls,” said Pangy.

Pi made a sound that drew Pangy’s attention.
“Why don’t you invite your relatives here to live with us, Pangy? We would love for you to stay with us. This forest is very safe from poachers,” said Lippy.

Pangy smiled and nodded her head. “Of course, you are all very kind and friendly. I will write to my relatives and invite them here. Pi loves it already as I can see from the expression on her face.”

“Hey, shall we all take a selfie with our new friend and her baby?” asked Rinky.

“Though I am shy, I would love to send this photo to my relatives in Africa to invite them here,” replied Pangy. 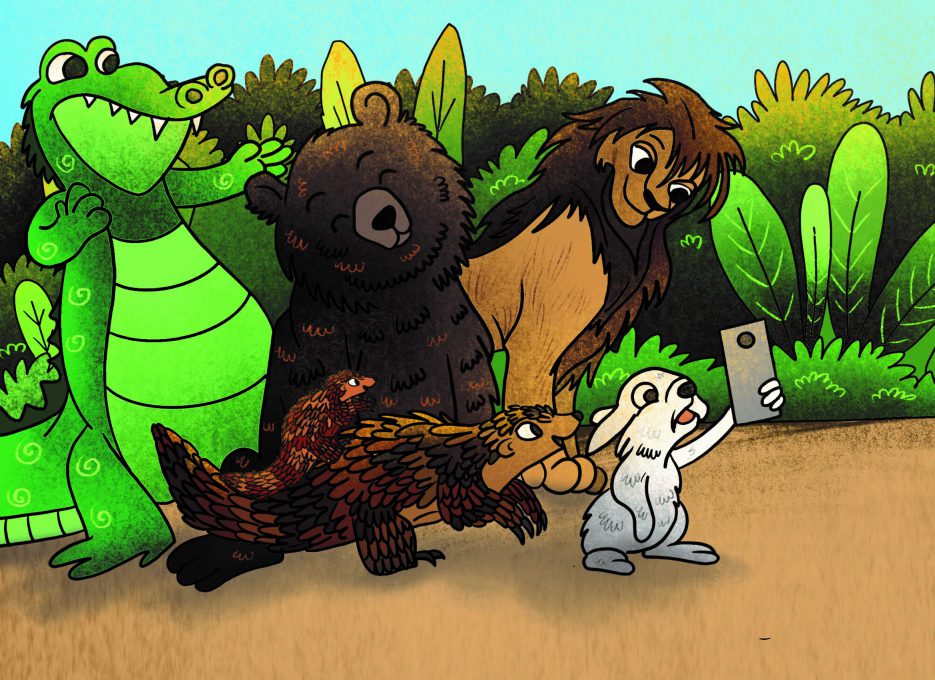 They all smiled and took a selfie, for a friendship that they hope would last forever!