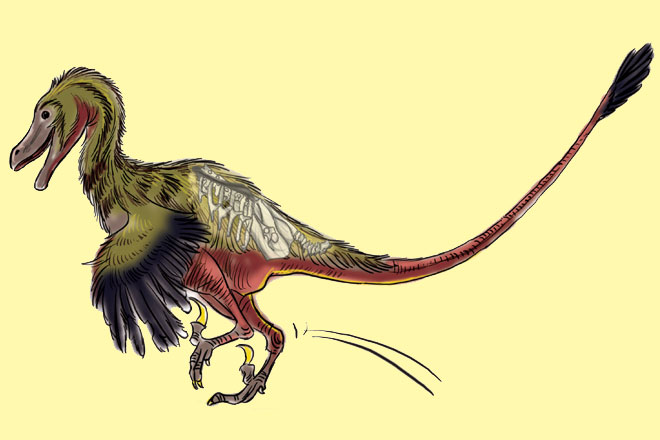 Birds could be the surviving dinosaurs. Evidence collected over the last 15 years confirm that birds evolved from the Theropod dinosaur. Theropods (meaning beast footed) and they include the majority of the two-legged meat-eating species such as Velociraptor and Tyrannosaurus. Birds are actually descendants of the small non flying Theropods.

Dinos had feathers
Velociraptors were feathered dinosaurs. First evidence came from a fossil from Cretaceous* sediments found in Mongolia in late 1990’s which resembled bones just like those in modern birds. ‘The more that we learn about these animals, the more we find that there is basically no difference between birds and their closely related dinosaur ancestors. Both have wishbones, brood their nests, possess hollow bones and covered in feathers. If animals such as Velociraptor were alive today, our first impression would be that they very unusual looking birds,” says Mark Norell, Chairman & Curator-in- Charge, Fossil Reptiles, Amphibians, and Birds at the American Museum of Natural History in New York. Dinos to birds
From the leg of a 68 million year old American Tyrannosaurus Rex scientists extracted a soft tissue containing collagen proteins*. Scientists decoded these proteins and found a strict correlation with those from ostriches and chickens.

Dinos breathed like birds
Velociraptors had a breathing structure similar to modern birds such as pelicans and cormorants. This structure which is called the uncinate process consists of “small bones that act as levers to move the ribs and sternum during breathing,” says Jonathan Codd, Senior Lecturer in Integrative Vertebrate Biology.

Birdlike eggs
Another evidence that strongly supports the dinosaur-to-bird transition came from a fossilized theropod female dinosaur bearing two bird like eggs inside her.

John Ostrom, a Yale University geologist, in the 1970s predicted that small, fast, predatory warm-blooded dinosaurs such as the 3.4 metre long Deinonychus, which lived around 110 million years and weighed 70 kg, Dromaeosaurus and Velociraptor which weighed around 15 kg were the feathered fathers of the modern birds.

Dinosaurs had feathers, were warm blooded, breathed like birds bore two eggs at a time and their cells were similar to those of modern ostriches and chicken. The question is how did they learn to fly? Can you imagine a 9 ton Tyrannosaurus Rex while running after his prey taking off flapping a pair of little tiny wings on his back?  It rather seems like an opening of a new Hollywood cartoon. Fossil finds tells us that dinosaurs that learned to fly were small in size and could attain top running speeds of 30/40miles/hour. This feature allowed them to live better and longer. Feathers made them also more aero dynamic, leading toward dinosaurs with larger feathers. In millions of years this new evolutionary trend made flight developed from the ground up.

And now they are birds. It seems that the dinosaurs didn’t die out after all. They are still walking with us. John Long, Australian paleontologist Strategic Professor in Palaeontology*, Flinders University in Adelaide, South Australia, in his book Feathered Dinosaurs (2008) writes: “Remember, when you next tuck into a tasty morsel of chicken that you are eating something that seamlessly evolved from the mighty predatory dinosaurs. There’s just a hint of T. Rex in every bit.” Hmmm, yummy!

*Paleontologist is someone who studies dinosaurs.

Similar breathing structures What makes Dinos and Birds the same?