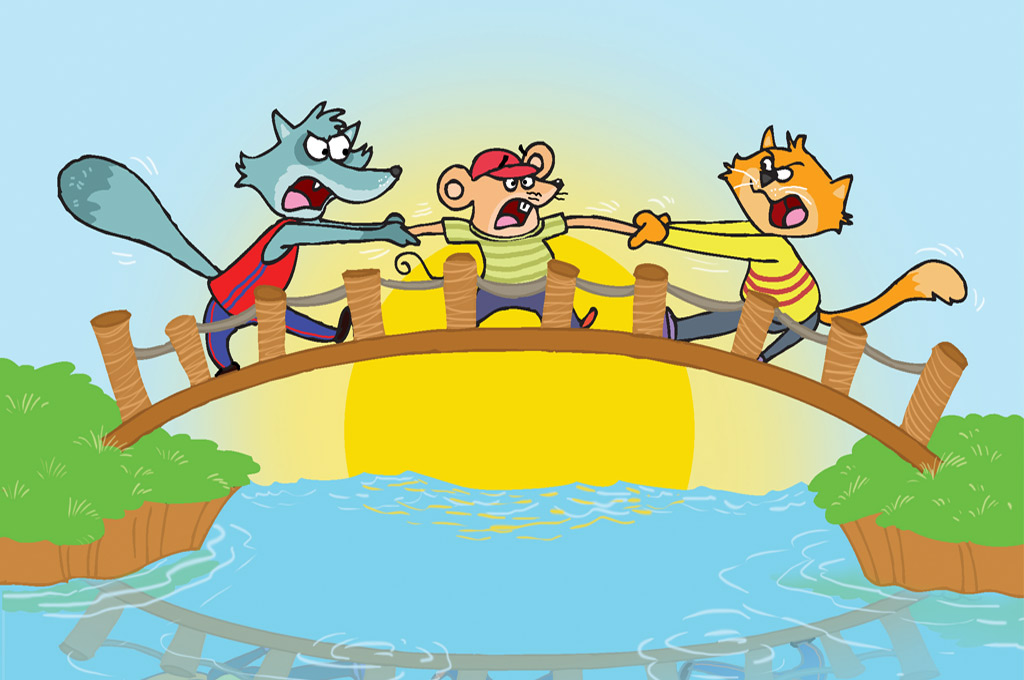 Meeku, the mouse was taking a walk when he saw an apple fall from a tree.

“An apple! Let me take it home. I’ll wash and eat it,” thought Meeku.

As he walked away, Billu, the cat reached there. “You better hand over that apple over to me,” said Billu.

“Look! I want to eat fruits today. Otherwise, I would have eaten you first and then the apple,” threatened Billu.

“How can I trust him? He may gobble the apple and then eat me too,” thought Meeku and ran from that there.

Billu followed Meeku. Meeku reached a bridge and saw Bhiku, the wolf coming from the other side. Meeku froze. By then Billu also closed in on him.

“How will you save yourself now?” asked Billu, as he walked towards Meeku.

“Wait! Take the mouse if you want, but leave the apple for me. I have put on weight and the doctor has advised me to eat only fruits,” said Bhiku.

“My doctor has told me to have fruits because of my increased weight too. And I will spare this mouse as well. He has made me run so much that I am very hungry now,” said a panting Billu.

“Take the mouse if you want and leave the apple for me. You ran a long distance and so you must have lost weight. Now you don’t need to eat the apple,” said Bhiku.

“If that is the case, then I’ll take the apple and release this mouse. You chase him and lose weight,” said Billu.

“Stop arguing, Billu. It wouldn’t be good if I got angry!” warned Bhiku.

“Don’t try to dominate me. I’m not afraid of a foolish wolf like you,” replied Billu. “How dare you call me foolish! Now, this mouse as well as the apple are mine,” said Bhiku, pulling Meeku towards him.

“You can’t do that. I had seen the mouse first, and so I will take the mouse and the apple with me,” said Billu, pulling Meeku towards himself.

Billu and Bhiku then began fighting over Meeku.

“Why don’t you decide between yourself whom I should go with,” Meeku questioned while flinching with pain.

“Both of you are pulling me and expect me to keep quiet!” cried Meeku. But Billu and Bhiku ignored him and continued fighting.

“Fighting will yield no result. Talk and find a solution” said Meeku.

“Meeku, we are know that you will play a trick on us to escape, but we won’t let that happen,” said Billu.

“I’m not trying to trick you. I just don’t want you to fight with each other,” replied Meeku.

“Really? Then how would you solve our problem?” asked Bhiku.

“Why don’t you toss a coin and decide?” suggested Meeku. “That is a good idea,” agreed Bhiku. “Let’s do it then” said Billu.

“And what if we get neither heads nor tails?” asked Meeku.

“What do you mean?” asked Billu and Bhiku in confusion.

“What would happen if the coin lands perpendicular to the ground that neither heads nor tails are up?” asked Meeku.

“How can that be possible?” they asked.

“Let’s just suppose that it happens. Then what shall we do?” asked Meeku.

“Then we will let you go,” said Bhiku and Billu in jest.

“Let’s go to the bank of the river and toss a coin,” said Meeku.

More from Champak: The Clever Turtle

“If we toss here, my coin may fall into the river and I do not have another coin to toss again,” explained Meeku.

All three walked down the bridge and came to the bank of the river.

“I’ll toss the coin in the air. If it’s heads, then Bhiku will win and if its tails, Billu will win,” said Meeku and tossed the coin.

Bhiku ran to see if it was heads or tails.

“Wait!” said Billu. “I don’t trust you. You may turn the coin in order to win.” He let go of Meeku’s hand and ran behind Bhiku.

When the two found the coin, they saw it standing perpendicular to the ground due to the moist and soft soil.

“Meeku was right! Everything is possible,” said Bhiku. Billu nodded in agreement. “Let him go. If we caught hold of him, we would have to argue again as to who would get the apple and who would get him,” said Billu.

“You are right,” said Bhiku.

One thought on “Everything is Possible”

Is story ke baare me information do please