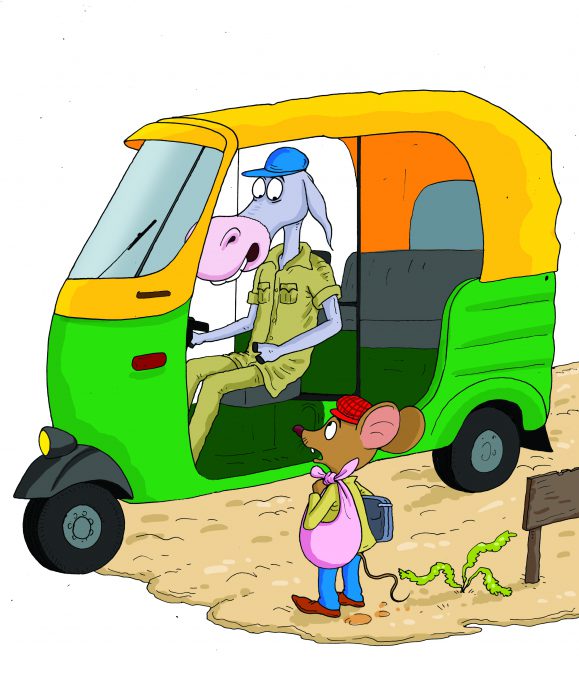 Pichu mouse was fed up and bored of his life in Anandvan. He wanted to go to the city. He had heard a lot about the exciting city life and wanted to experience it.

One day, he made up his mind to go to the city.

Before leaving, he learnt a few ways of greeting people in the city, like ‘good morning’, ‘hello’, ‘good evening’.

Early morning, he packed a few biscuits for his long journey and left for the city.

Pichu reached the main crossing of the forest and waited for a vehicle to take him. After some waiting, he saw Golu donkey riding his rickshaw. He called Golu to stop.

“Golu bhai, I have to go to the city. Will you take me there?” asked Pichu.

“Pichu, I don’t go all the way to the city. I can drop you off at the main road. From there, you will find some means to go to the city,” replied Golu.

“That can’t be true! The city has many facilities for a better life. People live there comfortably. I am tired of life in Anandvana. I want an enjoyable and comfortable life in the city. I will look for a job there too,” said Pichu, as he climbed on Golu’s rickshaw.

“All the best to you!” Golu smiled and wished him luck. He dropped Pichu at the main road.

Luckily, there was a truck parked near the road. Its driver and cleaner were talking. “We have to take these goods to the city before tonight,” Pichu heard one of them saying.

He jumped in the truck, delighted!

After a few hours’ drive, the truck entered the city. When it stopped, Pichu got down quickly.

It was getting dark. But the city was well lit. There were electric lights everywhere. Shops displayed goods of different kinds. Humans were everywhere and the roads were cramped with long rows of vehicles.

“Ah ha! Even at night, it’s as bright as day here. What a contrast between the dark Anandvan forest and this bright city!” said Pichu, joyfully. 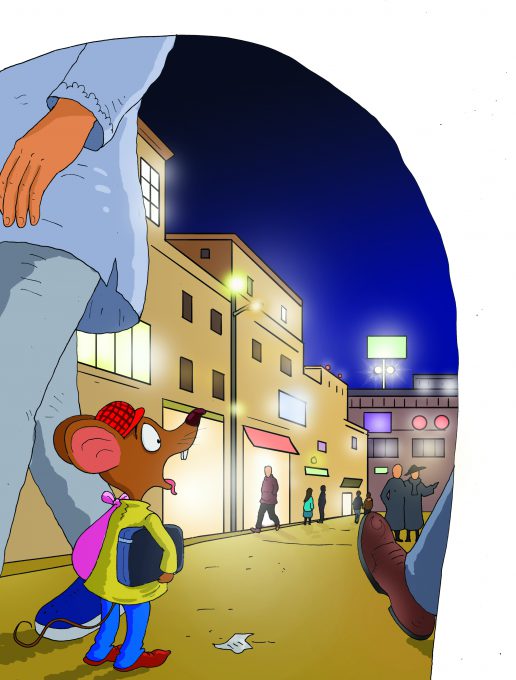 Pichu was hungry and tired. He took out biscuits from his pocket and ate them. Then, he fell asleep under a bench.

When he woke up the next morning, he found people up and moving about. There was hustle and bustle everywhere. Some people were out for a morning walk and some were jogging.

“There are so many humans everywhere. To be able to live in this city, I need to find some city mice and make friends with them,” thought Pichu.

He started off in search of city mice. Even after wandering for a long time,
but he couldn’t find a single city mouse. He did spot quite a few dogs on the roads though.

Pichu went under the shade of a building to rest. But he was alarmed to hear a conversation between two humans. “There are some new mouse in the godown. They have to be delivered to the office,” said one man to the other.

“They must be talking about the city mouse! I should to go with them to meet them,” thought Pichu, and quietly followed them.

The men went into a big hall that had a lot of boxes. Some men were putting the boxes in a van parked outside. Pichu hid behind a box and watched them.

“These boxes contain mouse for the computers. Handle them carefully. Last time, some of them had fallen out of the box,” instructed one man to another, who was lifting the boxes.

Pichu had never heard of a computer mouse!

“It seems these people catch the mice, put them in boxes and send them to some place. I have to be careful, lest they catch me and put me in a box too! Golu was right when he said that humans are selfish and treat animals cruelly,” thought Pichu.

Then he thought of his carefree life in the forest. How peaceful was life there! Here in the city, there was danger everywhere.

One of the men saw Pichu. “There is a mouse behind that box. Catch him before he bites one of the boxes,” he shouted. All the other men dropped their boxes and ran after Pichu. Pichu, jumped onto a window and scurried out of the building quickly! 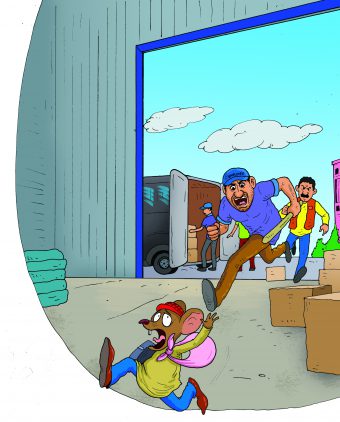 “The life of a forest mouse is much better than that of a city mouse. I do not wish to live in such a place. I am going back to Anandvan,” murmured Pichu, and set on his way back to his beloved forest.

One thought on “A City Mouse”

The God whatever provides us that is better for all, we should not make tantrums in it, but I love village than city life from beginning…..