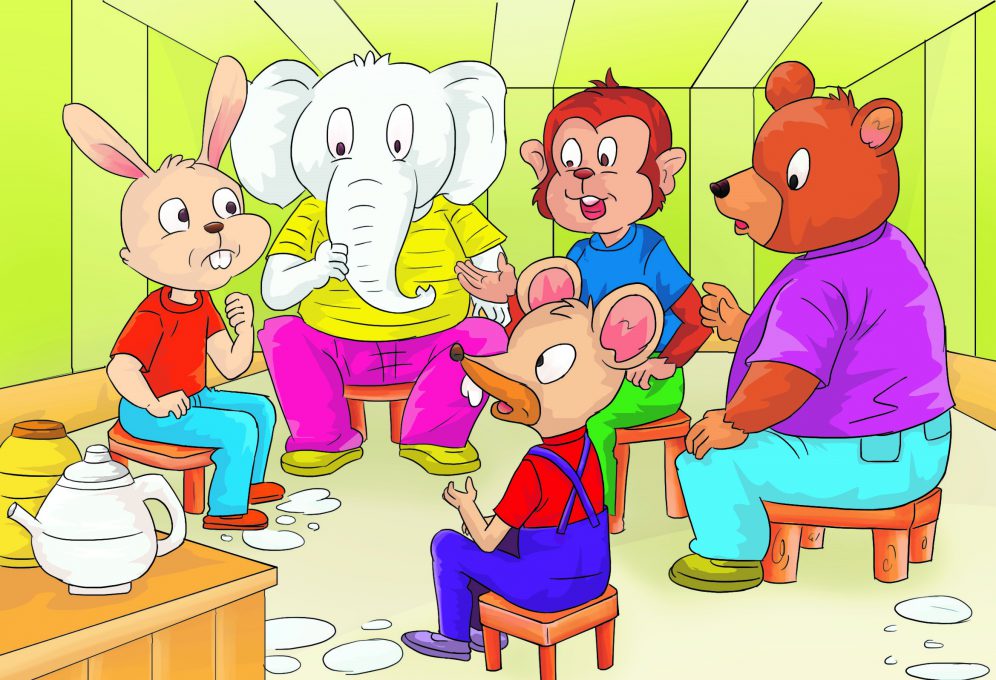 Rimpy rabbit was sitting at home, thinking deeply about something. Just then some of his friends knocked at the door.

Rimpy invited them in but was still lost in thought.

“What’s the matter, Rimpy? You seem to have forgotten your friends in the jungle after you have returned from the city. Our summer vacations are almost over and you are not meeting anyone! We have been waiting for you in the park forever!” said Monty monkey dramatically.

Rimpy replied, “Sorry, Monty, I was lost in thought and didn’t check on the time.”
Momo mouse teased, “Oh really, we did not know that you can think!”

“Momo, I am not in a mood for jokes just now,” said Rimpy, jumping up.

“Yes, without the pocket money, how will he eat carrots now?” Momo added.

This annoyed Rimpy but he kept quiet and said, “No, friends, it’s nothing
like that.”

His friends realised that Rimpy was talking about something serious.

“What has happened? I haven’t heard of any big problem in the jungle,”
asked Jacky.

“The problem is of water,” replied Rimpy.

“Oh, this is like digging a mountain only to find Momo,” said Bunty.

“Bunty, the idiom is ‘digging a mountain only to find a mouse’,” interrupted Monty.

“Yes, that’s what I was trying to say. Momo is a mouse so digging a mountain only to find him. Rimpy, you’re unnecessarily getting worried over such a small matter. If there is no water in your house today, you can take some water from my house,” offered Bunty.

“What all of you think to be a small matter is not small. There is a huge problem of water shortage, which I got to know once I visited the city,” said Rimpy.

“What about water shortage? Tell us more about it,” asked Momo.

“When I visited the city this time, I saw that most houses were getting water through tankers. This was not the case when I had gone to the city a couple of years ago. Right now, they are not getting enough water for basic needs and this is bothering me,” replied Rimpy.

“Rimpy, this is a matter of the city. This problem is not going to arise in our jungle,” said Bunty.

“A few months back, I’m sure even the people of the city thought like this. But now, they have no water and regret why they didn’t do enough to save water,” explained Rimpy.

“So what can we do about this?” asked Momo.“Find a solution to save water,” replied Rimpy.

“We can start by harvesting rainwater in our homes. This water can be used for several purposes,” Rimpy said.

“Surely, we can do this,” everyone agreed.

“In addition to this, we should replace or repair all leaking taps. We should use a bucket of water for bathing and turn off the taps while brushing our teeth. Even the smallest effort carried out by each one of us can significantly help in conserving water,” Rimpy added. 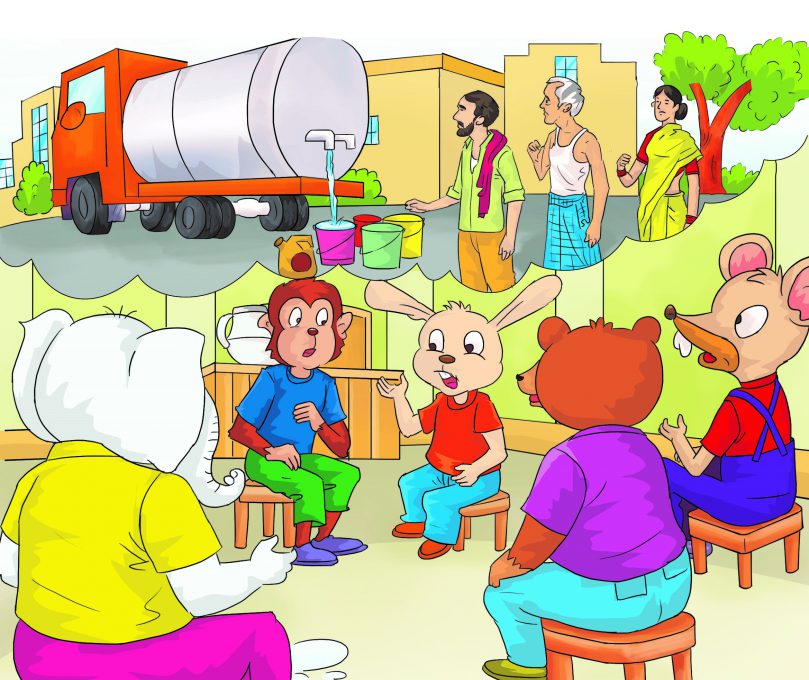 “You are right, Rimpy. From now onwards, each one of us will save water,” pledged everyone.

“Now, let us go to the park,” said Rimpy as he watched the animals standing with troubled faces.

“Yes, and also to figure out how we can create a big rainwater harvesting tank in the park,” replied Rimpy.

All the animals burst into laughter.