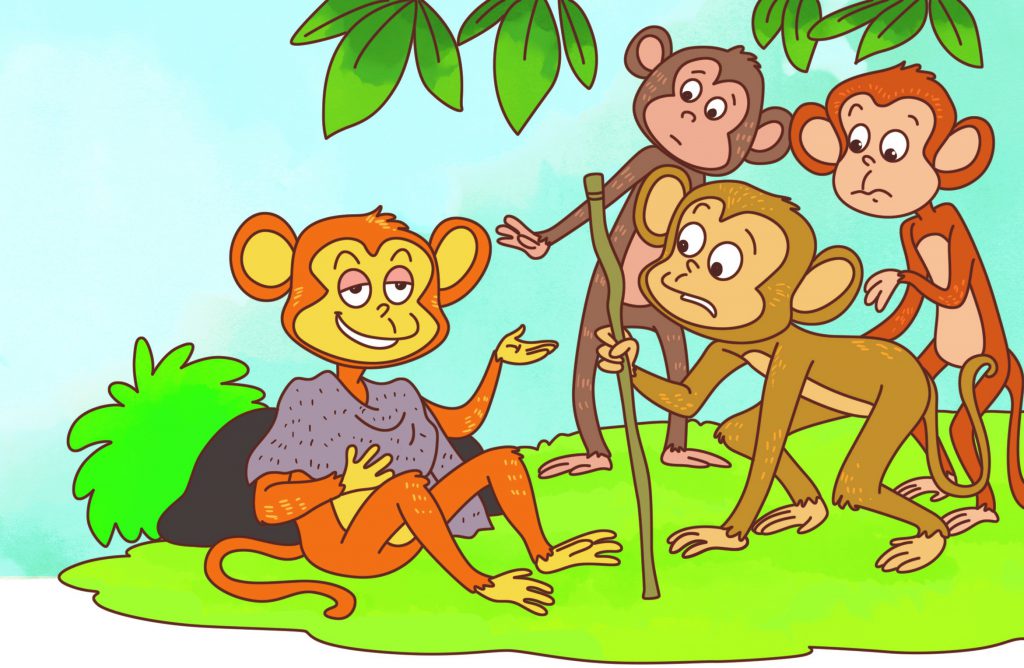 One day Charlie monkey walked out of the forest towards the village. There was some commotion near the village, and Charlie climbed a tree to see what was going on.

He saw several people were seated along the roadside and were holding their hands out to people who were passing by. Some of the passers by handed them money or fruits.

Charlie was delighted seeing this, “This is great! I have to work so hard and even after searching, I am hardly able to find fresh fruits or good food to eat. And these people are getting food by sitting at one place! I should also do the same. But if I sit here, people may shoo me away. I must do something about it,” said Charlie to himself.

He thought for a while and then went and grabbed a blanket from a house nearby.

He wrapped it around himself and went and sat at the roadside, a little away from the other beggars. 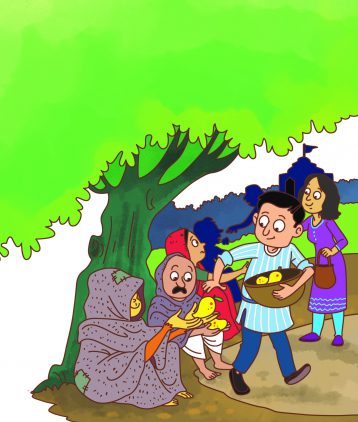 Copying others, Charlie too held out his hand at people passing by.

If someone gave him money, he would throw it away, but when they gave fruits or other food, he would eat it with relish.

He started enjoying his days.

Soon, the other monkeys in his troop noticed that Charlie was not around and became curious.

One evening, when Charlie returned to the forest, the other monkeys came to him and asked, “Charlie, you don’t come with us these days to the orchard to eat guavas? Where are you the whole day?” one of them asked.

“Oh, I’m really enjoying myself these days. You guys should join me,” he said, rubbing his tummy and explained his scheme. 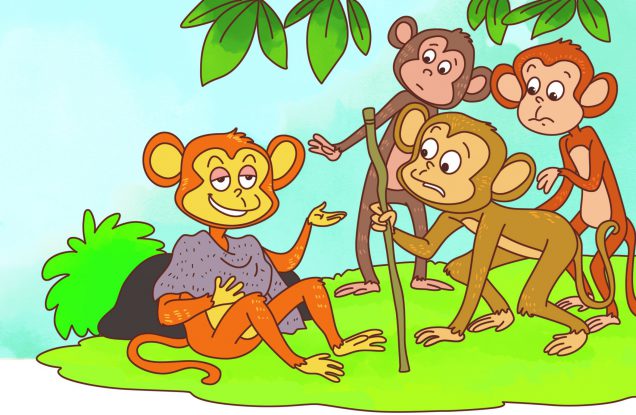 “Charlie, we may be naughty but we’re not lazy and will not eat by cheating. I suggest you too should stop begging for food. If the humans ever find out that you’re fooling them, they will beat you up,” advised an elderly monkey.

“No, they’ll never find out! I’ve been fooling them for a month now and they have no idea yet about it?” laughed Charlie.

The other monkeys tried to stop him from begging, but he did not listen to anyone.

Several days passed. When people noticed that Charlie would not accept money, they began giving him more food thinking that he was some higher person who did not have greed for money.

Soon, the other beggars on the road began getting lesser money as people gave more attention to Charlie. But they could not do anything about it.

One day, Charlie was sitting and holding out his hands to passers-by as usual, when suddenly there was a gust of wind.

As the winds become strong, Charlie held on to the blanket that was wrapped around him. He tried hard to hold it, but the wind was too strong and blew it away from his hand.

When the other beggars and the people saw that a monkey had been sitting as a beggar, they became angry.

“Oh! this monkey has been fooling us for so many days,” they all shouted and ran behind him with sticks to beat him up.

Seeing the danger, Charlie quickly climbed a nearby tree. But people started throwing stones at him. Some of the stones hit Charlie and he was injured but he somehow managed to escape and save himself.

“The other monkeys were right! If I had listened to them and hadn’t given in to greed of free food, I wouldn’t have been in this condition today,” thought Charlie as he limped back towards the forest. He promised himself never to do so again! 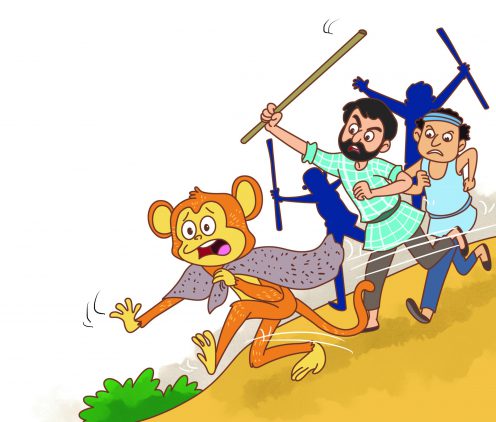