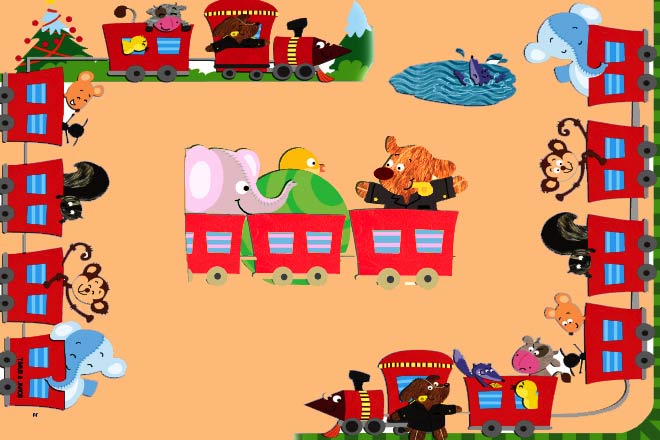 It was very cold outside, but everyone’s face was lit with happiness. It was Christmas!

There was a lot of hustle and bustle at Lucy’s house. Lucy had a box full of toys. At night everyone at home wished each other ‘Merry Christmas.

At midnight there were a few soft whispers from the toy box. A red coloured toy train came out and said, “I am going out for a trip around the house for Christmas. If anyone wants a ride, he can take a ticket and get into the compartment.” Mickey, the puppy became the conductor of the train. He wore a black coat and stood outside the compartment blowing his whistle.

Sweety, the sparrow came out from the midst of the toys and said, “A ride through the house on the Christmas train! This is a good idea.” She flew over and settled near Mickey.

“Mickey, give me a ticket,” she said.

She took the ticket and took her seat.

Rob, the elephant’s sleep was disturbed on hearing the chatter. “Are you all going somewhere?” “Yes, we are taking a ride on the Christmas train. But you will need two tickets, in order to get on the train.” Sweety laughed and said.

“Sweety you should not say such things. My compartments are so big that Rob can easily fit in them,” the train boasted.

Rob was happy to hear this. He immediately adjusted his specs and went to Mickey. The puppy felt like teasing Rob. He said, “If the train does not start then you will have to get down and push it.”

“Hey! Why will I have to push it alone? Everyone will get down and push it,” he said. He entered the train and took the back seat. He felt very sleepy.

Harsha, the cow, Soni, the ant, Pia, the squirrel, Cherry, the mouse, Bantu, the monkey all boarded the train the same way. The train had just started when Lottu, the fox boarded the train.

Everyone was frightened when they saw him because he was wicked.

“Why should I move? I have a ticket and I sat here first, therefore no one can move me from here” said Sweety.

“How dare you defy me!” Lottu said angrily, he pulled Sweety’s feather. She cried out in pain.

“That is hooliganism Lottu. You should be ashamed.” Harsha, the cow said in anger. “Since you came in last, you get the last remaining seat.”

The fox, however, did not listen.

Baring his teeth, he said, “You stop your nonsense or I will bite off your tail.” The animals sat down quietly. The speed of the train increased. It was going to the garden through the kitchen. All the animals had got into the train comfortably, but their fun was ruined because of the fox. Rob was sleeping snugly, unaware of all that was going.

Suddenly Bantu had an idea. He went to Lottu.

“Leave this seat. This is my friend’s place. He will crush you if he gets angry,” threatened the monkey.

The fox was angry. “Let him come! Where is he?” asked the fox.

“He is sleeping in the back seat.”

It was dark at the back. Agitated Lottu went there and without seeing Rob he sank his teeth in his body. However, due to the elephant’s thick skin, his teeth broke. Rob woke up from his deep slumber. He was very angry at being roused from his sleep. Before Lottu realised anything, he wrapped the fox with his snout and threw him out of the train.

There was a pool in the garden filled with water. Lottu fell in it.

“This was fun.” All the animals shouted together. There was a Christmas tree in the garden with colourful lights on its leaves.

“What a sight,” Rob uttered unexpectedly. “I slept off in vain.”

“How would we have gotten rid of the fox if you had not slept?” Bantu said, and all the animals started laughing celebrating the Christmas spirit.