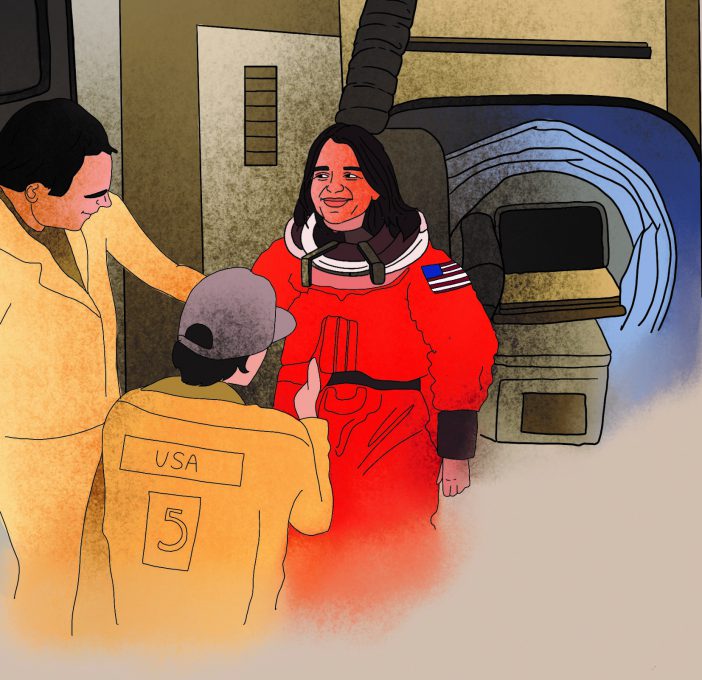 In the city of Karnal, Haryana, a couple held the hand of their little girl and went to the Principal’s Office of Tagore Bal Niketan. They had come for their daughter’s admission.

In the office, the Principal asked, “What’s the name of the child’s father?”

Then he pointed to his wife and said, “This is Sanjyoti, her mother.”

The Principal looked at the child and asked her affectionately, “What’s your name, dear?”

“But that’s your nickname, isn’t it? What name should we use at school?”

The girl’s mother said, “Madam, we’ve thought of three to four names. But we haven’t decided yet which one to keep.”

She told her the names they had thought of. 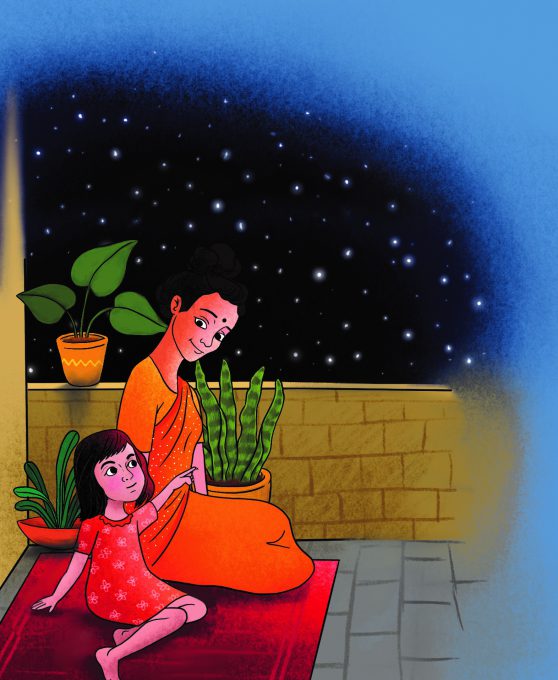 When she heard the names, Manto said at once, “Kalpana. Keep that name. I like it!”

“But why do you like the name Kalpana?” asked the Principal, with a smile.

“Because ‘Kalpana’ means imagination. And I like to imagine and dream,”
said Manto.

The name Kalpana was thus entered in the school register.

The husband and the wife stared at each other for a while and said slowly, “July 1, 1961.”

However, they knew that her real date of birth was March 17, 1962. But if they told her real date of birth, she would not get admission in the school. She was a year younger than the cut-off date for admission. Kalpana’s parents wanted their daughter to be admitted to this school because it was close to their house.

Manto was the youngest amongst their four children but she was quite smart
and they thought she should attend school immediately.

The admission process went smoothly and soon Kalpana started going to school. She was good at studies and began excelling in class.

One day, Kalpana returned home from school and said, “Mother, today all the children in school drew the map of India on the floor and painted it. It was a project, and everyone took part in it.”

“Then you must have taken part in it too!” said her Mom.

“No, I didn’t like that! I decorated the ceiling of the classroom with black
chart papers, put bright dots on it, and made it look like the night sky with countless stars—the outer space!”

Her mother knew that Kalpana was interested in space. She often saw Kalpana lie down under the open sky and stare at the stars for hours.

Time passed, and Kalpana reached class 10. It was the Mathematics period.

While explaining the null-set concept in algebra, the teacher said, “A null set is
also referred to as the empty set. It is the set that contains no elements. For example, suppose we have to find the set of all senior citizens who are less than five years old. Clearly, there are no senior citizens under five and a person has to be much older than five to be considered a senior citizen. Thus it is a null set or an empty set. Let me give you another example to explain it clearly. Indian women astronauts are a great example of a null set. That’s because not a single Indian woman astronaut has gone into space.” 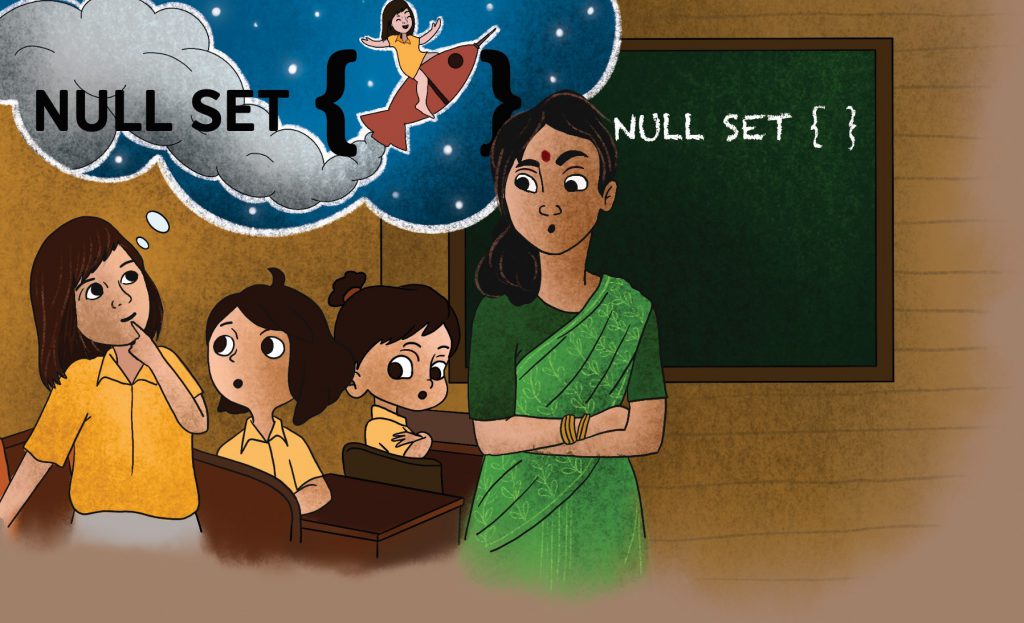 Kalpana, who was sitting in the classroom, slowly said, “Maybe in a few years someone will, and then it will no longer be an example of a null set.”

The other students looked at her in surprise. But what she said was perhaps going to become true.

Soon, it was time for her to take admission in a college. Everyone was wondering what subject they should take up.

“I will pursue engineering,” announced Kalpana at home.

“No, no. You should become a doctor or a teacher. That’s more suitable for girls,” said her father.

Her mother was also of the same opinion, but Kalpana did not budge. She insisted and finally her parents gave in and Kalpana took admission in Chandigarh Engineering College.

When she chose to pursue the aeronautical branch of engineering, her teachers said, “This branch is not for girls. There won’t be any girl in your class. You’ll have to study alone.”

With determination, Kalpana continued her education. She proved to her family and society that a girl could become an aeronautical engineer. After engineering, Kalpana wanted to study further. No one could stop her from going ahead. She kept going until she reached outer space.

Because she was Kalpana Chawla—the first Indian woman to travel to outer space. Born in the small town of Karnal, she dared to dream and reached great heights.

After completing aeronautical engineering in 1982, she went to the United States. She completed her degree in aerospace engineering from the University of Texas in 1984. In 1988, she got selected by NASA, and in 1995, she was selected to travel into space. She left for space on November 19, 1997, on the STS-87 Columbia Shuttle. She spent 372 hours in outer space and returned to Earth on December 5, 1997.

She left for space for the second time on January 16, 2003, in the Space Shuttle Columbia. It was a 16-day project. With her six companions, Kalpana Chawla stayed in outer space, carried out research, and gathered information. Unfortunately, on February 1, 2003, before landing, the Columbia space shuttle malfunctioned and crashed over Texas, and Kalpana along with her six companions lost their lives. 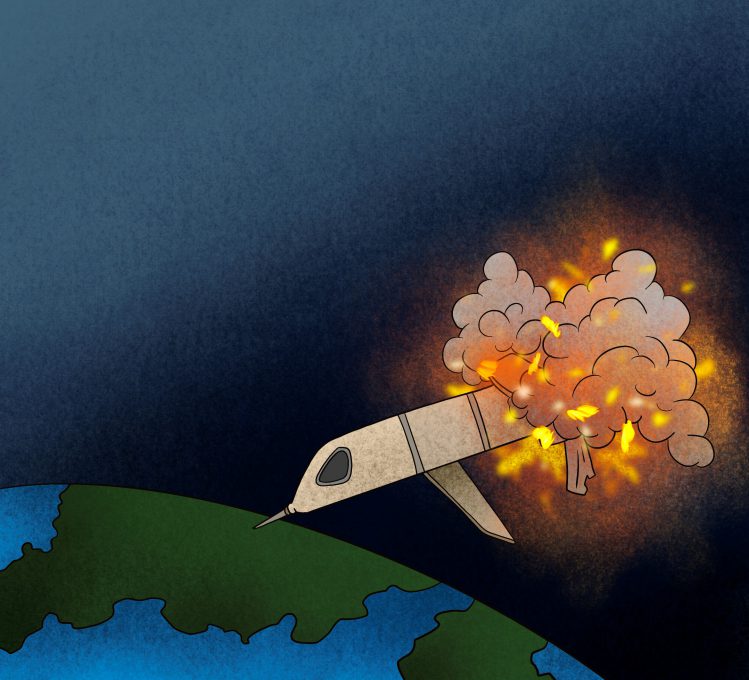 Although Kalpana Chawla is no longer with us today, she pursued her dream and proved that girls of India are no less than others. With willpower and due diligence, dreams can be fulfilled.

She always said that she was made to go into space and that she would die in space too. She completed her mission and bid farewell to the world. And since then, a new star shines brightly in the sky.