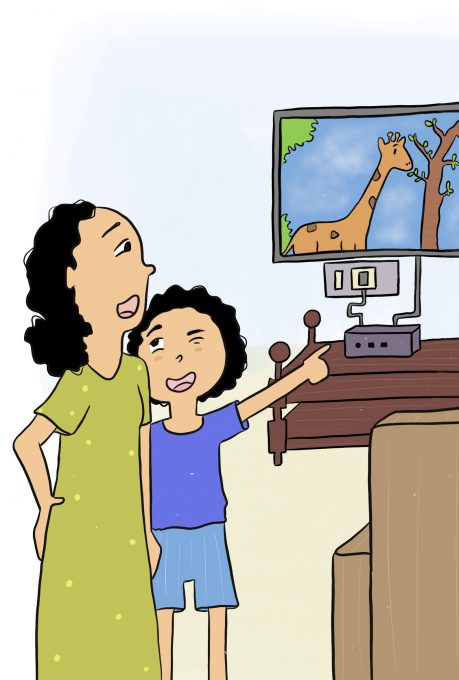 “O Harsh! Please switch it off now. You have been watching the television since morning,” Mummy shouted from the kitchen.

It had been raining erratically the whole day. The sun would shine for some time and then it would rain suddenly.

The washed clothes were hanging out on the clothesline to dry.

Mummy wished that Harsh would get up and bring them in. But he was busy watching the television and the clothes were wet again.

Harsh was in grade 9 and he preferred watching the television and playing games on his mobile.

If he was not outside the house, he would spend his whole time inside watching TV. His favourite channels were Discovery, National Geographic, BBC Earth and Animal Planet. 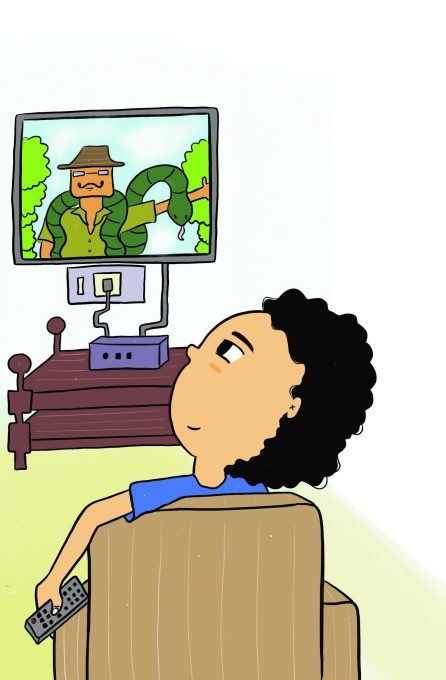 His parents approved of these channels as they were helpful in imparting knowledge. But they also thought that such excess screen time was damaging his eyes.

He often tried to explain to them that LED televisions did not harm the eyes as much as the earlier televisions. But they were not convinced.

Different kinds of programmes were shown on the Discovery channel, from cookery lessons to unknown facts about animal life.

Harsh was thrilled by watching these programmes. He loved animals and birds. He also liked the various cartoon channels, but his parents did not allow him to watch them much.

Harsh often wondered that if J L Baird had not invented the TV, then what would have happened? We would never be able to see the remote forests, the deep oceans and the snow-covered mountains.

Harsh’s house was near the park. Since it had been raining a lot the past week, there was abundant greenery all around. A rainbow could also be seen in the sky today.

Harsh’s father was at the office and Mummy was busy in the kitchen. Harsh was on the terrace watching the rainbow when he suddenly heard Mummy’s loud scream.

He came running down and saw that she was shocked, unable to form any words. She was pointing towards the can of flour in front of her, with eyes wide open.

Harsh looked in that direction. A snake was coiled on the flour can. His heart started beating fast, but he did not lose courage. 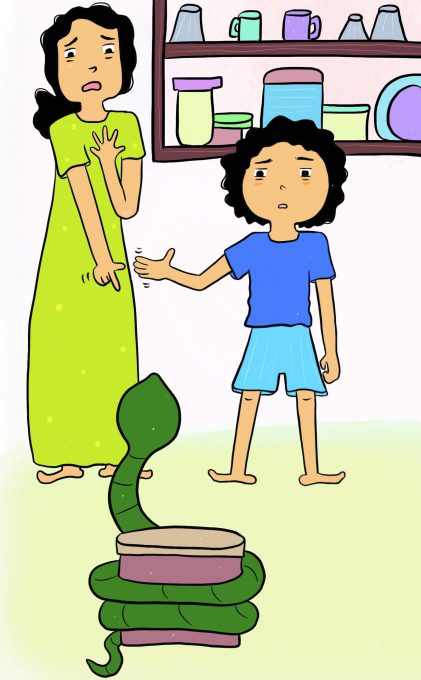 He quickly pulled out his mobile and dialled the phone number of the snake catcher. But no one picked the phone, so he left a voice message asking for help. There was no one in the neighbourhood who could help them.

He slowly signalled his mother to move away from the snake, while he kept a watchful eye on it. A little mistake could endanger their lives.

Just a few days ago, he had seen a snake exactly like this one on the Discovery channel. He knew it was not a poisonous species of snake. But he noticed that the snake’s tail was hurt and hence it was hissing.

Harsh and Mummy were both frightened, but the snake could not be left alone until help arrived.

Harsh quietly picked up a stick and an empty container from the storeroom.

He then switched on all the lights in the kitchen. He gave Mummy the responsibility to keep an eye on the snake, while he proceeded cautiously and cleared the path between the kitchen and the main door. 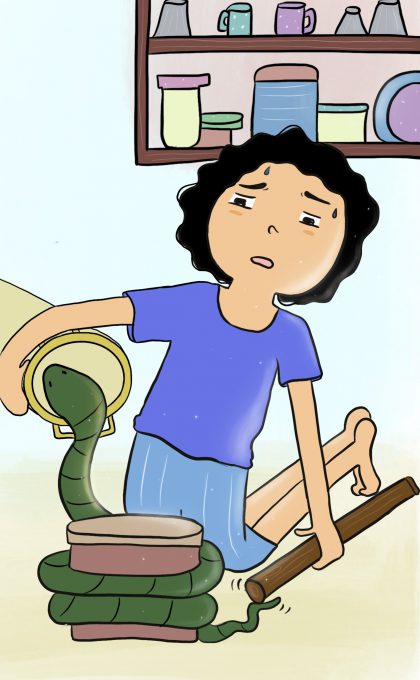 With his heart beating fast, he slowly approached the flour can. Mummy was shocked and could not understand what Harsh was doing.

He opened the lid of the empty container that he was holding and placed it in front of the snake. Then he carefully tapped on the snake’s tail. The snake entered the can straight away and Harsh closed the lid quickly.

Mummy looked at him in astonishment. She did not expect Harsh to be so brave and courageous.

Harsh put the container in a big paper bag and went out through the front door. Fortunately, the snake catcher also arrived at the same moment.

He praised Harsh’s bravery profusely. The snake was not a poisonous one, but catching a snake safely was a praiseworthy deed, especially if done by a child. The snake catcher assured them that the snake would be released in the forest.

By now the neighbours had also gathered outside the house. They were all praising Harsh wholeheartedly. After everyone left, Mummy asked him, “How did you manage to do that?”

Harsh pointed to the television. Mummy did not understand it. He then explained, “I had seen this kind of snake on the Discovery channel a few days ago. I knew this snake was not poisonous and that it was to be caught by its tail. I learned this by watching the television.”

Mummy looked lovingly at Harsh and thought to herself, ‘After all the television is not all that bad’