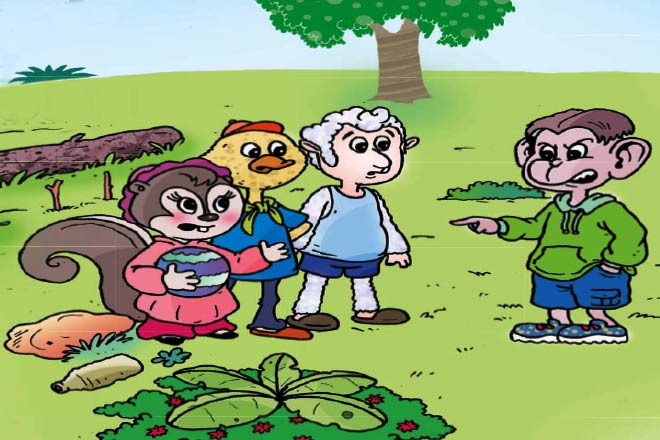 Chikki, the squirrel, Lonu, the lamb, and Dimpy, the duck were playing with a ball, when Chintu, the monkey arrived and said, “I want to play too!”

“No, you will create some trouble like you do every time you play with us,” said Chikki.

“You always cheat and end up fighting with us. We don’t want to play with you,” pitched in Dimpy.

“How dare you refuse to let me play!” fumed Chintu.

“Just sit quietly and watch us play until you learn to play fair,” said Lonu.

At that moment, one of them threw the ball up in the air. Chintu caught it in a flash and ran away shouting, “Ha ha! Now I’ll see how you continue to play without me.”

Chintu was notorious in the forest of Sonavan for causing trouble. Many animals would fall prey to his mischief. Once during the monsoon, there was a puddle of muddy water under a tree. Chintu sat on a branch of that tree and threw stones into it whenever any animal walked by, splashing muddy water all over them.

“I see that your clothes have gotten dirty,” Chintu commented cheekily after splashing muddy water on Dina, the deer. “But don’t worry; get them dry-cleaned at the laundry. I’ll pay for it!”

A little later, he threw a stone that splashed muddy water on Koni, the fox’s face. Chintu laughed and said, “That make-up looks good on you, Koni! You should do this every day, or just go to the parlour to get yourself cleaned up. I’ll pay for it!”

Koni walked away grumbling, “This Chintu is nothing but a menace.” Another time, Chintu had pushed Kitty, the cat off her bicycle because she wouldn’t let him ride it first. Chintu laughed at Kitty, who was moaning in pain and said, “Don’t make a big deal out of this. Go to the doctor and I’ll pay for it.” Such was his behaviour.

One day, after the incident with Chikki, Lonu and Dimpi, Chintu was sitting on a tree and eating fruits when he spotted the three huddled behind a bush and whispering something among themselves.

Chikki whispered something which Dimpy was unable to hear. So she asked loudly, “What did you say? On the tree? What’s in the large bag?” “Shhh! Be quiet, Dimpy! Someone might hear us,” cautioned Lonu.

The three of them started speaking in whispers again. Chintu was curious to know what they were talking about secretively. He tip-toed close to the bush to listen in on their conversation.

“We must reach the spot before anyone else does, otherwise we will lose out on the opportunity,” said Lonu.

“There are three date palm trees behind the mound at the other end of the lake. A short distance from there, you’ll find a lone peepal tree. That’s where we’re going,” said Chikki.

“So, it’s settled then! We will meet tomorrow morning by the lake. But remember, no one should know about this. It should stay just between the three of us,” said Lonu. The trio agreed and left for their homes. As soon as they left, Chintu thought to himself, “What could be in that large bag? Money? Food? Whatever it is, it must be something very special. And don’t they know that it’s impossible to hide something from someone as clever as me? When the three go there tomorrow, they will return empty handed because I am going to get my hands on it before them.”

Chintu left for the mound at once. He found the date trees and the peepal tree as described by Chikki. He climbed up the tree and began searching for the bag. It was getting dark, but he continued to search and finally found it. Chintu immediately opened the bag

Dimpy, Lonu and Chikki, who were hiding in a bush nearby, came out and said, “What’s the matter, Chintu?

Are you hurt? It looks like you have been stung by bees. Why don’t you go visit a doctor. We’ll pay for it.”

“You tricked me into coming to this place!” said Chintu, writhing in pain.

“But aren’t you’re the cleverest animal in the forest? Who can trick you?” said Chikki. Chintu finally felt the pain of all those whom he had troubled and laughed at. “I am sorry,” he said, realising the folly of his ways. “I have been blinded by my own arrogance. Thank you for making me realise it.”

“We just wanted to show you how it feels to be on the receiving end of your pranks. We are happy it worked,” said Dimpy.

The three of them helped take Chintu to the doctor and too care of him for the next few days. Then on, they all remained friends and Chintu did not revert back to his old ways.