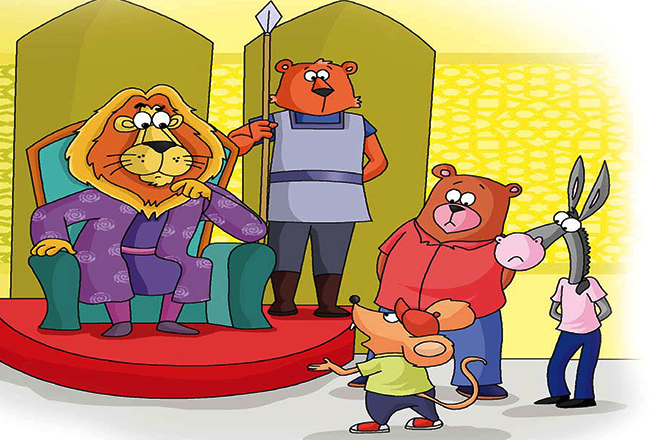 Champakvan, a once peaceful forest, was in deep trouble. Lately, somebody had been stealing the animals’ belongings. Damru, the donkey’s motorcycle, Meeku, the mouse’s gold chain and Blacky, the bear’s four pots of honey had all mysteriously gone missing.

The king, Shersingh was very upset with this and called for a meeting. He also invited Damru, Meeku and Blacky.

“Tell me exactly what happened with your motorcycle,” said Shersingh to Damru.

“Well your majesty,” Damru began. “When I turned in for the night, I had just       checked on my motorcycle, it was right outside my house. But, when I woke up the next morning, it had disappeared without a trace.”

Meeku went next and said, “Your majesty, I had spent the day with my friend, helping him with some work. When I returned that evening, I noticed that my cupboard was open and found that my gold chain was missing.”

“With great difficulty I managed to gather four pots of honey. I woke up one morning to find that they are all gone. My hard work has gone to waste,” said Blacky and burst out crying.

The king, Shersingh turned to the chief of police, Inspector Jumbo, the elephant. “Give us a few days, your majesty. We will investigate and get to the bottom of this,” said Inspector Jumbo.

“You have three days to find out who the thief is. If you fail, be prepared to step down from your position,” said the King and left the court. Jumbo, wiped the sweat from his brow. There was a lot at stake here and there was only one person he could turn to.

Inspector Jumbo called one of his best agents, Cheeku, the rabbit. Inspector Jumbo gave him all the information he needed and off Cheeku went towards Champakvan. Cheeku began to investigate and headed towards the hills surrounding Champakvan. As he climbed up the narrow path, he noticed a few shards of a broken pot. Upon closer examination, Cheeku found trace amounts of honey. He was on the right track. As he climbed higher up the mountain, Cheeku noticed footprints. As it was growing dark, Cheeku decided to come back the next day and investigate.

Cheeku came back to the same spot the next day and was just about to follow the footprints when he hear the sound of footsteps behind him. Off in the distance was Bobby, the ape. He had something in his hand. As soon as Bobby saw Cheeku, he fled.

“That’s strange,” Cheeku said to himself. “Why did he run away? What was that in his hand? I must report this to the inspector.”

Cheeku went back to Inspector Jumbo’s office and told him everything that had happened.

Inspector Jumbo was pleased and praised Cheeku for doing a good job. The next day, they would go to King Shersingh’s court. “Your majesty, I sent Cheeku, the rabbit to investigate and he found Bobby, the ape near the mountains and enough evidence to prove that he is the culprit,” said Jumbo.

Bobby was immediately brought to the court. “Why did you steal?” asked King Sher Singh.

“Your majesty, I am innocent. I have been framed,” said Bobby.

“Your majesty, may I ask Bobby a few questions?” Cheeku interjected. The king agreed and the cross examination began.

“Bobby, were you not at the mountain path yesterday afternoon?” asked Cheeku. “What did you have in your hands and why did you suddenly disappear?”

“Yes I was. I had my bicycle with me and I suddenly remembered that I had forgotten to do something, which is why I had to go back,” said Bobby.

“Were you going back to the place where you had stored Damru’s motorcycle, Meeku’s bangles and Blacky’s five honey pots?” asked Cheeku.

“Five? There were only four and I dropped one on the way,” said Bobby before realising what he had said.

Bobby knew there was no turning back now. He immediately fell at King Sher Singh’s feet and asked not to be punished. “Your majesty, I didn’t seal on purpose. I was made to steal,” he said and burst out crying. “You have five minutes to tell me everything,” said the king.

“Your majesty, my son has been ill for many years now. I have spent all my money on his treatment and he is still not cured. I only stole enough for his treatment. Please don’t put me in jail. Without me, there will be no one to take care of him,” said Bobby.

King Sher Singh forgave Bobby. He released him and also asked his ministers to ensure that Bobby’s son received treatment from a good doctor.