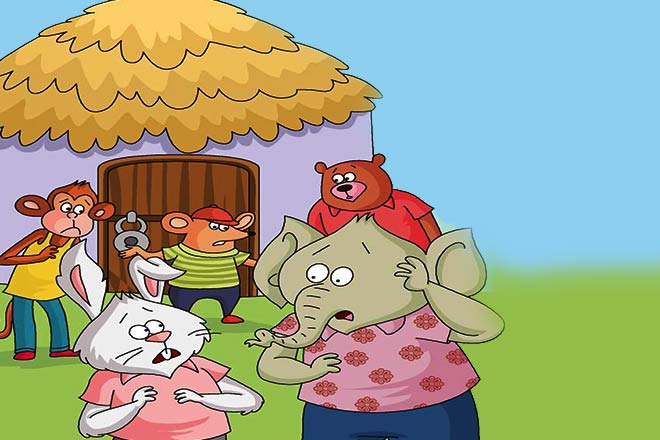 Baddy fox was cunning when it came to work. He often found new plans to cheat others.

While living in Champakvan, Baddy had borrowed money from almost everybody in the forest, but when it came to giving back the money, he always managed to escape by giving them some excuse.

One morning, Baddy went to Jumbo elephant’s house and saw him brushing his teeth outside the house.

Hearing Baddy, Jumbo was shocked. He spit out the water he was gargling with. Jumbo looked at Baddy from top to bottom and asked, “Baddy, are you sleepwalking? How can you double the money in a week?”

“Jumbo, I have an offer from a big company that can help me double my money. You are my best friend so I came to you. If you are not interested, I can ask someone else,” said Baddy.

“No, no. Wait for me here. I’ll get the money from inside,” said Jumbo and gave Baddy the money.

“Jumbo, come to my home after a week and take your money,” said Baddy keeping the money inside his pocket.

After a week when Jumbo went to Baddy’s house, he saw that the house was locked.

There was a huge crowd outside Baddy’s house, and all of them were saying that Baddy had taken money from them. Baddy had borrowed from many, telling them that he will double their money in a week and they had come to take their money back.

Seeing everyone, Jumbo shook his head and said, “Wow! Baddy has cheated all of us.”

Cheeku rabbit was weeping as he said, “Baddy has run away with my hard-earned money. I will not leave him if I find him.”

Meeku mouse asked them to calm down, “Friends, the mistake is ours. We should have thought before giving him the money. And how did we ever think that money could be doubled in a week’s time? Our eyes were covered with greed and because of that, we fell for his lies.”

One day in the forest, a foreigner fox came. He wore black spectacles, a hat and a T-shirt. Everyone stared at him.

“Hello, my friend. My name is Meeku. Are you new to this forest?” asked Meeku.

“Yes, I have come from America and my name is Bobby,” said the fox.

“What brings you to Champakvan?” asked Jumbo curiously.

“Next week there is a huge dance competition in America, and I’m on the lookout for good dancers. Whoever wants to participate in the competition can come and give their name, and whoever wins will get a chance to go to America,” said Bobby.

Everyone was surprised to hear Bobby.

“But, why have you come to our small forest? You will get really good dancers in the city,” said Jumpy.

“I have heard so much about Champakvan and so I thought I should hold the competition here and not in the city,” replied Bobby.

“I am so fat; can I participate in this competition?” asked Jumbo.

“Anybody who can dance can participate in the competition. Also, I am here for this. I will take you to America and teach you. Just come tomorrow and give your name,” said Bobby.

Bobby was staying at the Champakvan Grand Hotel.

The next day there was a long queue outside the hotel as everyone wanted to go to America. Jumbo, Meeku and Cheeku stood first in the line.

Bobby gave them a form and said, “Fill this form, please read the information about the competition in this paper.”

“Do we need to pay any fees?” asked Jumbo.

“No need, I will take all of you free of cost. I will spend for all expenses; I have just come to search for a good dancer. I have the money and don’t need to collect any fees,” said Bobby.

“If everybody thought like you, it would be so good,” said Meeku.

Cheeku asked, “I know that for going abroad we need a passport and visa, and we don’t have anything. How will we be able to go?”

“Leave everything to me. I will take care of all the formalities. I have contacts at the embassy,” Bobby reassured them.

24 people filled and gave their forms.

After checking the form Bobby said, “Everybody’s form is correct. Tomorrow evening, all of you come with your luggage and we will all go abroad in my private plane,” said Bobby.

The next morning, there was a huge crowd in the hotel. Meeku and Jumbo were very excited and they both came to the hotel early by scooter. “Bobby why are you so upset? Has the private plane come?” asked Meeku.

“There was a problem in the plane on the way from America,” said Bobby in a worried voice.

“My private plane has developed a technical problem, and it will take one week for it to be repaired,” said Bobby.

“So we can’t go to America?” asked Meeku with a grumpy face.

“We have to book ticket for another flight, and each ticket costs Rs. 40,000 each,” said Bobby.

“Yes, Rs. 40,000. But don’t worry. After reaching America I shall return your money immediately. If you give me the money by tomorrow morning, I will book the evening flight for America. Anyway, the competition will begin in a couple of days. If we get late today, then we won’t get a chance to participate in the competition,” said Bobby.

“We will not get a chance to go to America again. We must give the money to Bobby and book our tickets. We will get our money back once we reach America,” said Meeku.

“Yes, Meeku is right. This golden opportunity will not back come again,” said Jumbo.

Cheeku stopped them. He warned them, “Too much greed is not good. How can we believe Bobby and give him money?”

Meeku got angry and said, “Cheeku it’s not right to doubt Bobby, I have full faith in him. He is very rich and he will not cheat us. If you don’t want to go then don’t come. I will definitely go to America for a trip.”

Next day all the animals got their money and Bobby collected it. He said, “Now nobody can stop you from going to America. I will buy the tickets and we will leave in the evening.”

All of them decided to wait for him.

“He should have come by now,” said Meeku, looking at his watch.

Just then Cheeku reached and said, “It’s waste of time to wait for Bobby. He is not going to come.”

“How can you say that?” asked Meeku.

“If Bobby was coming back then he should not have left the hotel and gone. He has cheated everyone,” said Cheeku.

“So has Bobby disappeared with our money?” asked Jumbo, sadly.

Everybody started crying. Cheeku told everybody, “There is no use of regretting your actions. I had warned you. But you were all crazy about going to America.”

“Cheeku, we realise that we made a big mistake. We don’t want to go to America but just want our Rs. 40,000 back,” said a teary-eyed Jumbo.

“If you promise me that that you won’t make this mistake again then I will help you,” said Cheeku.

“We promise you that we will not repeat this mistake,” said everybody in same tune. Cheeku signalled towards the back of the hotel and they saw King Shersingh Lion came out with Bobby. He was handcuffed.

When Shersingh removed Bobby’s spectacles and the hat, all the animals were startled.

“Hey this is Baddy,” said Jumbo.

“Yes, this is Baddy. He fooled everyone by calling himself Bobby. He was going to cheat you of your money and run away. Cheeku told me everything at the right time. There is no dance competition in America. And all his stories were fake. Here, this is the money that you gave Baddy,” said Shersingh. Cheeku continued, “Baddy was going to rob us of all our money. He made us greedy with the thoughts of going to America free of cost so that we would believe him. He also made up a false story that the plane had gone for repair to get the money from you all. When Baddy asked for Rs. 40,000 I got a doubt, then I went to the police station and gave the inspector all the information about Baddy.”

Shersingh returned everybody’s money. All of them thanked Cheeku, and promised to never let greed affect the way they looked at things.