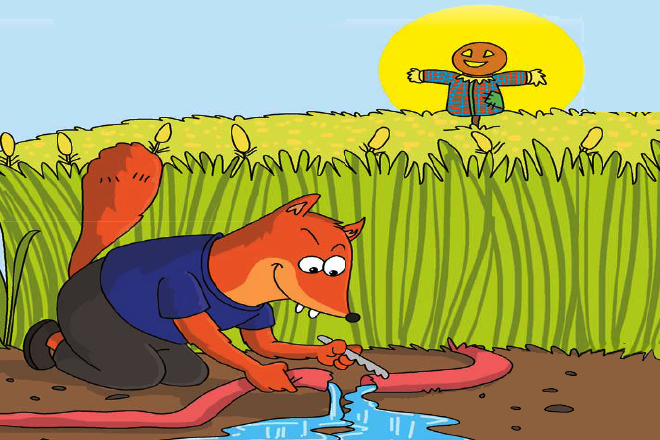 All the animals of Champakvan avoided Baddy fox. He had a habit of picking fights with everyone and enjoyed playing mean pranks.

One day, all the animals gathered to discuss Baddy’s behaviour. They wanted to find a way to deal with him.

“We must try to avoid Baddy. Whenever he is around, we must get out of his way,” said Cheeku rabbit.

“But why should we avoid him?” asked Jumbo elephant. “He must be taught a lesson. We cannot walk around hiding from him.”

“It is easy for you to say, Jumbo. He frequently picks on us small animals,” said Meeku mouse. “I feel Cheeku is right. It is better to stay away from Baddy.”

“I am not afraid of him. If he ever dares to cross my path, I will surely teach him a lesson,” said Jumbo.

Baddy who was intently overhearing their discussion, became angry when he heard Jumbo speak.

“Who is he to teach me a lesson? I will teach him a lesson instead,” thought Baddy.

Baddy came up with a plan to prank Jumbo. He cut the pipe that supplied water to Jumbo’s field. When the field dried up, Baddy waited for Jumbo to become furious and pick a fight with him. Instead, Jumbo quietly repaired the pipe and continued farming.

After a couple of weeks, Jumbo’s warehouse caught fire. Because of Jumbo’s alertness and some help from his neighbours, the fire was put out in no time and any damage was averted.

Though Jumbo knew Baddy was behind this mischief, he did not confront him. Baddy was puzzled by Jumbo’s behaviour. That week, Baddy was on his way to the market on his cart to sell some sacks of grains. One of the wheels of the cart got stuck in the slush. When Baddy got down to push the cart, he slipped and fell into a pit that he had dug.

No matter how hard Baddy tried to get out, he slipped and fell right back. He tried calling out for help, but there was no one around.

“If I am not able to get out of this pit, I wonder how the smaller animals would have got out. I now understand how much trouble I have caused. I should not have dug these pits at all,” regretted Baddy.

Soon, it began to get dark and Baddy was still stuck in the pit. He was cold and hungry. Even the few animals that passed by refused to help him saying he deserved it.

When this news reached Jumbo, he said, “If we too think and act like Baddy, what is the difference between him and us?”

Jumbo requested everyone to help Baddy, and they all agreed. Together, they lifted Baddy out of the pit.

“I am ashamed of the way I behaved with all of you; especially you, Jumbo. Please forgive me,” apologised Baddy. “To accept one’s mistake is in itself a big step towards change. You should use your strength and intelligence to help others,” advised Jumbo.

From that day on, Baddy turned a new leaf. He stopped troubling others and began helping everyone.