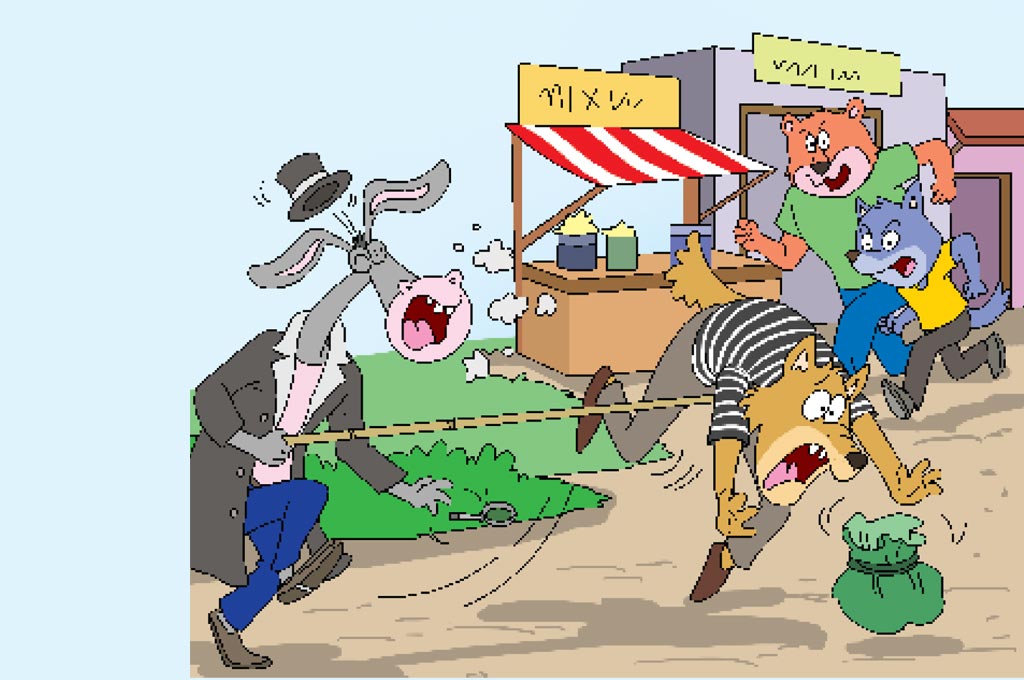 One evening, Damru donkey was watching a movie on television starring the famous detective Sherlock Holmes. He became so inspired by the movie that he decided to become a detective too.

Damru went to the market and bought a long overcoat and a hat, similar to the one worn by Sherlock Holmes. He also bought a beautiful cane and a magnifying glass.

He looked in the mirror and said to himself, “I look like a perfect detective now!”

Damru walked around the market, but no one seemed to notice him. He was puzzled.

Damru walked past a shop selling spice powders. The smell made him want to sneeze. Right at that moment, a thief was running away with some stolen jewellery.

As Damru sneezed hard, his cane accidentally hit the thief who fell down, crying in pain. The crowd caught the thief and started beating him. Though initially taken by surprise, Damru quickly got into the act.

“Friends, please do not take the law into your own hands. Hand the thief over to the police. Let me call the police and tell them that I’ve caught the thief as planned,” said Damru coolly.

The crowd stared at Damru surprised.

“You knew about the theft, Damru?” asked Monty jackal.

“Don’t call me, Damru; call me Detective Damru 008. I knew a theft was going to take place in that shop, so I was standing here to catch the thief,” said Damru, adjusting his hat.

“Wow! Great job, Detective Damru!” said Dina deer admiringly. “But how did you know that a theft was going to take place?” me such information,” said Damru.

Everyone was very impressed with Damru. Many approached him with requests to help solve their problems. Damru asked them all to meet him in his office.

Damru’s office was a shed with a big board outside that read, “World-famous Detective Damru 008”. It also had a stunning photo of Damru in his overcoat and hat, with a magnifying glass in hand.

To manage the flood of clients, Damru hired Jumpy monkey and Meeku mouse as his assistants. Both of them were intelligent and hence were able to solve the animals’ problems easily. Damru merely pretended to supervise them.

Gradually, Damru became famous. He had spread word around Champakvan that his informants would know in advance about any thefts that were going to take place and inform him accordingly. So, promptly all the thefts stopped. The animals were relieved but all the thieves began to worry.

Late one night, Laptu jackal, Baddy fox and a few other thieves were discussing the situation.

“How long do we sit quietly without planning a theft?” asked Laptu.

“If we plan a theft, then Detective Damru’s informants will come to know about it,” said Baddy. He then had an idea. “Let’s not plan our next theft. Let’s just go rob Champakvan bank right away. That way Damru will not be prepared,” he said.

All the thieves agreed to the plan. That night, Damru was unwell. He was on his way to the pharmacy to buy medicines. Just as he was walking past Champakvan bank, he became too tired to walk. So, he stopped and called his friend Blacky bear for help.

Blacky was a police officer. He was on his usual night patrol when Damru called.

“Hello, Blacky! Can you come to the bank now? I need help with something… What?…The constables are with you? Yes, bring them as well,” said Damru.

The thieves who were breaking into the bank overheard Damru. Assuming that he was alerting the police, the thieves ran away. As they were running, they came face-to-face with Blacky and his constables who immediately arrested all of them.

By morning, the news about how Damru helped catch the thieves in spite of being unwell spread all around Champakvan. to everybody. He was the talk of the forest.

There was another gang of thieves that lived on the outskirt of Champakvan. The leader of the gang, Hiru hyena, hatched a plan to steal from King Shersingh lion’s royal treasury.

“I’m scared! What if Detective Damru learns about our plan?” asked Roko racoon.

“Damru’s network of informants is small. He won’t know about our plan. Moreover, he won’t dare to confront a dangerous gang of thieves like us,” said Hiru.

That night, Hiru and his gang broke into the palace and robbed the treasury.

Next morning, when King Shersingh came to know about the robbery, he was furious. He summoned Damru right away.

“You get information about all thefts beforehand. Why didn’t you stop the thieves from stealing from my treasury?” roared King Shersingh.

Damru was nervous. He could not reveal to King Shersingh that he had been bluffing about getting information from informants. So, he made up another lie.

“Your Highness, it is true that my informants alert me about all thefts beforehand. But in this case, it looks like the gang of thieves do not belong to Champakvan. They must have come from the neighbouring forest of Sundervan, where I do not yet have a network of informants,” said Damru seriously.

“You have two days to find and arrest the thieves. I will send four soldiers to help you,” said King Shersingh.

“As you say, Your Highness,” said Damru and went back home.

“Now I realise that being a detective is not easy,” thought Damru. “Perhaps I should run away from Champakvan!”

Damru looked out of his house and saw King Shersingh’s soldiers standing outside.

“I won’t be able to run away either. What do I do now?” he wondered sadly.

Damru’s anxiety increased with each passing moment. Meanwhile, Hiru got to know about King Shersingh’s order to Damru.

“Can Damru catch us in two days? Is he really that smart? I must go and see for myself as to what Damru is up to,” thought Hiru.

Hiru could see Damru looking out the window. He seemed to be saying something.

“You have landed yourself in deep trouble! The soldiers will surely catch you and behead you! You better confess right now before things get out of hand,” said Damru.

“Oh no! Damru has seen me! That’s why he is threatening me. I better surrender. I don’t want to be beheaded!” thought Hiru.

Hiru ran to Damru to ask for forgiveness.

“Please don’t make the soldiers behead me. I’ll return all the valuables that I stole from the treasury,” pleaded Hiru.

Damru was surprised. “I was talking to myself about confessing to King Shersingh that I’m not really a detective. But the thief thought I was talking to him!” he thought to himself.

But Damru pretended that he had indeed spoken to Hiru. “Okay. Since you have surrendered, I will talk to King Shersingh and ask him to give you a lenient punishment,” assured Damru.

Hiru was grateful to be spared from getting beheaded. He revealed the spot where the other thieves were hiding as well. Damru informed the soldiers who then arrested Hiru and his entire gang.

“You have proven that you are an excellent detective. I wish to honour you by making you the official detective of my kingdom,” said King Shersingh.

Damru was shocked. “Oh no! Looks like I really have to plan my escape from Champakvan this time!” he thought.