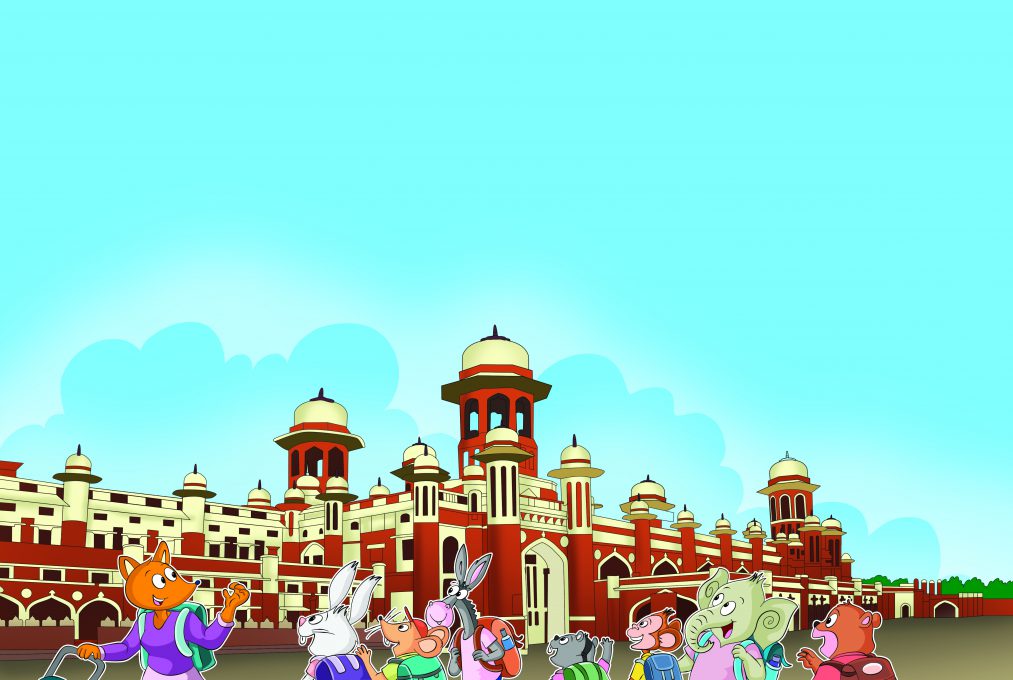 The students of Champakvan School were excited. Their teacher, Dena deer, had informed them that for their annual trip they would be visiting the ‘City of Nawabs–Lucknow’.

As soon as they reached the Charbagh railway station, the station’s building gave them a clue of the kind of architecture they would get to see in Lucknow.

After checking into their hotel room and freshening up, all the students sat around their teacher. She told them about the places they would visit each day.

“First we will visit the famous Imambara of Lucknow. It is also known as the Asfi Imambara,” she said.

Sally squirrel could not control her excitement and said, “Can we first go and see the Bhul-Bhulaiya or the famous maze of Lucknow. I have heard that it is a lot of fun and most tourists lose their way in it.”

“Just like you have lost patience here Sally,’’ smiled Dena deer. “The maze is a narrow ladder-like path inside the Imambara that leads us to the big dome.”

The others laughed when they heard this and though Sally was embarrassed for not knowing that the maze was inside the Imambara, she was happy because they were first going to the place she really wanted to visit.

Sally, in her traditional skirt, was super excited to see the maze. She walked ahead of everyone holding her skirt. 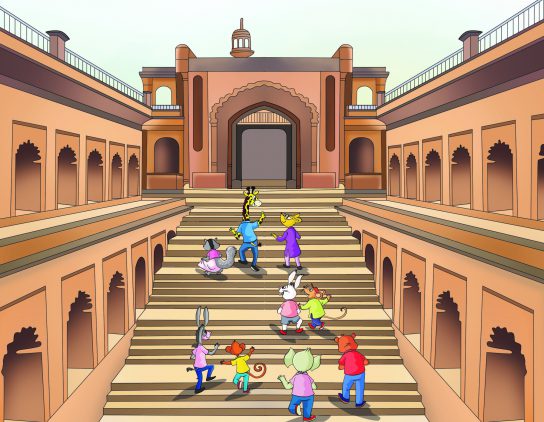 Gogo guide took them on the zig-zag stairways that led to the Imambara. He told them there were 84 steps in all. Sally ran ahead to reach the top. Gogo guide walked behind her. The stairs then branched into a fork that led to two passages—one that went upstairs and the other down.

Sally took the stairs that went up, since they were going up, but as soon as she went further that passage was blocked by a wall. She was confused.

Gogo guide explained, “Yes, this is why it is called a maze. It was built to confuse the enemy. We have to go down from here before we climb up and then we can reach the top of the Imambara. This fork confuses anybody new to this place, just like Sally.”

Sally was embarrassed yet again while the others laughed.

Gogo guide took them upstairs through the correct path. “Now, I will show you the amazing craftsmanship of this building. I suggest you all walk about 50 metres to the other end with your teacher. and I will tear a piece of paper at this end. You will be surprised at how clearly you can hear the sound of the tearing paper.”

The students excitedly walked to the other end with Dena Ma’am to experience the magic. 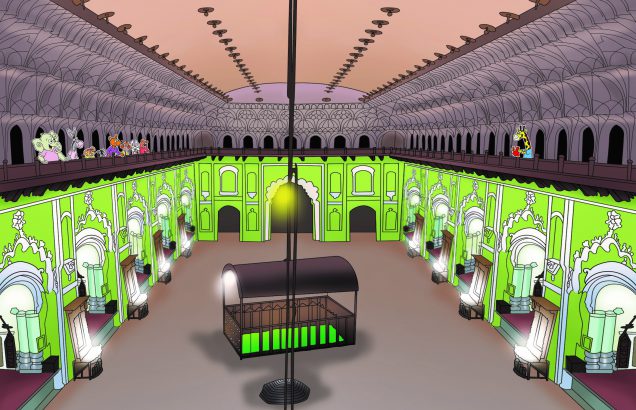 As Gogo guide tore the paper, they all could hear the sound. They were amazed at how that could happen.

Gogo guide told them that the building had been constructed in a way that even a whisper was clearly audible from far.

Gogo guide pointed towards the windows on the upper floors and said, “Those windows have been constructed in such a manner that anyone coming through the main gate is visible to those standing at the window but those coming in cannot see who is at the window.”

Everyone peeped out of the windows to see.

After this Gogo guide took them down the stairs towards the front of the Imambara.

“This is the main building of the Bara Imambara. It is based on Persian architecture.”

He took them inside the building, and everyone was amazed to see the magnificent structure.

“This was built by the Nawab of Awadh, Asaf-ud-Daula in the year 1784. It was built in the memory of the Late Hussain Ali, a saint, but the main reason behind building it was something else.” 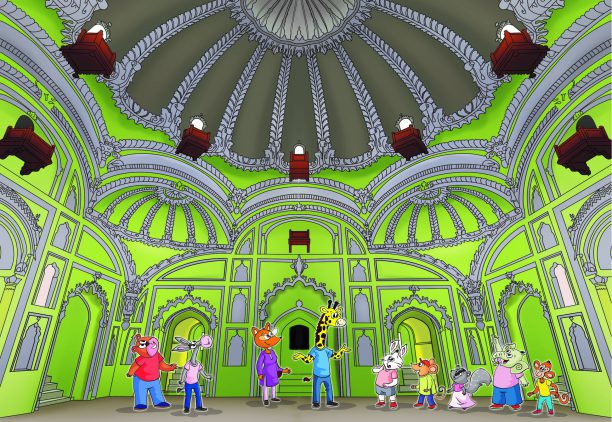 “What was the reason?” asked Jumbo elephant waving his trunk.

“Awadh faced a terrible drought in 1784. The people of Awadh didn’t have any means to earn. In those days, the people of Awadh lived with pride and didn’t accept charity. But when many started to die of hunger, Nawab Asaf-ud-Daula started the construction of the Imambara, to provide the people with a source of employment. The poor population of the city worked during the day while the well to-do worked at night.”

“Does that mean that construction took place during the day as well the night and that a lot of people worked here? The expenses of building it must have been very high too,” said Jumpy monkey.

“Almost 20,000 people were employed for the construction of the Imambara and about INR 10 lakh, a huge amount in those days, was spent on its construction.”

“This means that Nawab Asaf-ud-Daula was a very kind ruler who helped many people,” said Blacky bear.

“Yes, and that is why during that times it was said that ‘One who doesn’t receive from God receives from Asaf-ud-Daula’,” said Gogo Giraffe.

“There must have been an architect who designed this amazing building. Who is he?” asked Meeku mouse, showing his big teeth.

“The biggest speciality of this building is that best quality bricks and limestone were used in its construction. And no wood, iron or cement was used.”

The animals could not believe that a ceiling that big could be made without iron, wood or cement.

After this, Gogo took them to see the well and the mosque in the Imambara compound. They also went to see other buildings in old Lucknow, close to the Imambara.

They thanked Gogo giraffe for showing them around, went back to their hotel to rest so that they could go back to Champakvan the next day.

2 thoughts on “Big Dome of Lucknow”