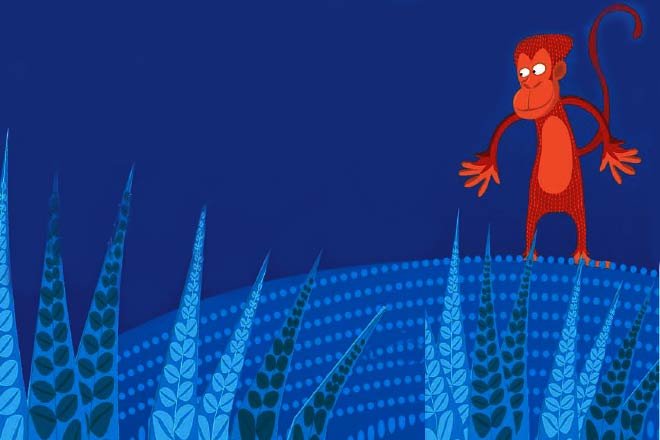 There had been no rain in Champakvan for many days. The forest that was
once lush and green was now turning dry and barren. All the animals were anxious as the resources of food and water were dwindling with every passing day.

Bony Monkey was oblivious to everything that was happening around him. He was engrossed with his inventions in a cave. Just a few days ago, he had made some pillows by tying dry leaves on a curved branch. Bony’s pillows were selling like hot cakes. The older animals of the jungle felt comfortable after keeping them under their heads while sleeping at night. They had agreed to pay Bony Monkey in kind and promised to give him something to eat in return for the
pillows that gave them a good night’s sleep.

It was Bony Monkey too, who had invented a vehicle a few years ago, by using a wooden board and wheels. This vehicle had become very popular in the jungle. The animals had preferred to use it as it saved a lot of their time. But then a few mishaps had occurred and some of the animals had found themselves falling off the vehicle. And so, there were many apprehensions about using Bony’s vehicle now. Kalu Bear still used the vehicle. But he still had trouble balancing himself on it and often fell down. He would then have many negative things to say about
Bony Monkey.

And today, Hariyala Deer was feeling on top of the world, thanks to another one of Bony Monkey’s unique inventions. Well just today, Bony had fixed a pair of wings on Hariyala Deer’s back because the deer wished to visit his friend Sundar Crow’s nest that was on top of a tree. However, this deal had proved to be quite expensive for Hariyala Deer as he had promised to give Bony an entire month’s
supply of fresh fruits in return.

Hariyala Deer and his friend Sundar Crow had worked very hard for this day. They had collected feathers for many months. Sundar Crow would fly and search for feathers that the birds had dropped. He would pick them up carefully and give them to Hariyala Deer to take to Bony Monkey.

Bony Monkey would reject the feathers if he didn’t think them good enough for the wings, but Hariyala Deer and Sundar Crow wouldn’t lose their patience. They would look for more feathers and take them back to Bony Monkey.

And finally today, their patience and hard work had paid off.

Hariyala Deer was looking forward to his flight. Once he flew to the nest, he would be able to see Sundar’s three chicks and also have the opportunity to meet his wife, Sundari.

For the first few days, Hariyala Deer had taken fresh fruits to Bony Monkey as
promised. But today, he noticed that as the trees and plants were drying up, he couldn’t find anything to take to Bony Monkey.
Sundar Crow helped him look for the fruits, and even though they tried very hard, they found nothing.

“What are you doing outside your cave today, Bony Monkey?” Hariyala Deer asked. “You hardly come out!”

“I was looking for you,” Bony Monkey said in a loud voice. “Where is my remuneration?

You haven’t brought me a single fruit today.” Hariyala Deer didn’t know what to say. “Umm…well…actually…” he started to say, feeling quite embarrassed.

“Are you trying to make excuses?” Bony Monkey said furiously. “Where are my
fruits?”

“Bony,” Sundar Crow said politely, hoping Bony Monkey would calm down. “Please climb to a tree trop and look around. You will see how bad the situation in our forest is. There are hardly any fruits growing on the trees of Champakvan right now. We haven’t had any rainfall of late. You probably haven’t realised that since you hardly come out of your cave.”

“Is that so?” Bony Monkey asked, looking astonished. He then went back to his cave and brought out another one of his inventions. It was a long rope that had a
basket tied to one of its end. Bony Monkey put the rope around a tree and then sat in the basket. He asked Hariyala Deer to pull the rope.

As Hariyala Deer pulled the rope, Bony went higher and higher and finally reached the tree top without having to climb a single branch.

He then looked around and said, “Well, you are right! There are hardly any
fruits growing on the trees of our forest!”

Bony Monkey then looked up towards the sky and said, “I will make a very big basket. A gigantic one. All the animals of Champakvan will fit in it. We will use it to fly in the sky. We all will then go and live on the moon. The moon shines like a pearl. There must be water and lush green forests on it for sure. We will have plenty to eat there.” News of Bony Monkey’s idea spread through the forest like wild fire. All the animals and birds gathered outside Bony Monkey’s cave with their families. They all wanted to go to the moon. Bony Monkey gave them tokens with numbers and told them that he would take at least two months to build his basket. He then went into his cave and began preparations.

“I have assured everyone that I’ll take them to the moon,” he told himself as he gazed at the moon that night and scratched his head. “But how will I fulfill my promise?”

Soon, the gigantic basket was ready. “The basket is ready but how do I make it fly?” Bony wondered. He then snapped his fingers and smiled.

“I have an idea!” he said enthusiastically. “How about fixing wings on this basket?” He called all the animals and birds and said, “Collect as many feathers as you can! And the birds can help us fly the basket too. To our destination—the moon!” He then went into his cave, scratching his head.

Bony Monkey had planned to take the basket to the moon with the help of wings.
But the truth was that he was not very sure about his idea. While he was thinking of what he would really do, he saw the tea kettle boiling on the stove. Bony Monkey noticed that the kettle had become very hot and that there was steam coming out of it. He saw that the lid of the kettle was moving upwards because of the steam.

Bony Monkey clapped his hands and jumped excitedly. “Yesssssssss!” he shouted.
“Fire, steam and heat will do the trick!”

The next day itself, he had the basket cut in the middle and made arrangements for steam to be made there. The basket was then covered from the top completely, so that the wind wouldn’t change its temperature. It was also opened from below, so that the heat didn’t reach the animals.

Finally, the day everyone was waiting for arrived. All the animals and birds of the forest climbed into the gigantic basket. Sundar Crow, his wife Sundari and their three chicks also sat inside the basket.

The basket rose high in the air when it received heat and steam from below. Even the birds did their bit to help raise it in the air.

They waved goodbye to all the other animals who were left behind, and hoped that they would reach the moon by the nightfall.

Suddenly, a storm started blowing. The strong winds put the fire beneath the basket out. Bony Monkey tried his level best to navigate the basket through the storm, but nothing could be done. The moon still wasn’t anywhere in sight. But the animals still hoped that they would reach it soon.

And then to their great horror, the storm pulled the basket along with it.

To everyone’s disappointment, the basket hit the peak of a tall mountain and tumbled down. All the animals and birds panicked and were now only concerned about the lives of their families and friends.

The next morning, they found Bony Monkey lying unconscious. All the animals
and birds gathered around him and helped him regain his consciousness. When Bony Monkey finally came around, he began crying, “Oh! What a foolish thing I’ve done! I’ve brought you all far away from Champakvan! We didn’t even go close to the moon.” Sundar Crow smiled and consoled Bony Monkey.

“Bony,” he said. “What you did wasn’t foolish but stupendous. Look
around! There is a river flowing nearby! The forest is lush and green here! And there is plenty of food too!”

Hariyala Deer patted Bony Monkey’s shoulder and said, “And guess what? The
best part is that we are still in Champakvan! We are on the other side of the mountain— the other part of the forest we were always afraid of going to!”

“Is that so?” Bony Monkey asked, looking around. “Yes!” said Sundar Crow. “But we are no longer afraid of this part as we now know that there is nothing to be scared of here! Who knows how things would have been on moon?”

“That’s correct!” Hariyala Deer said. “Whatever has happened, has happened for
the best.” All the animals clapped their hangs and cheered for Bony Monkey.

“Well done, Bony Monkey!” they shouted happily. “Thank you for bringing us here!”

Bony Monkey sat under a tree. He couldn’t believe what had happened. When he
gathered his wits, he called out to Hariyala Deer and said, “Well, I have brought you all here in my gigantic basket, haven’t I? Where is my remuneration?”

All the animals and birds laughed. “Bony Monkey,” they said. “This part of the forest will be lush for a long, long time! Don’t worry! We will bring you fruits for as long as we live!”

Bony Monkey smiled. He was glad that he had brought all his friends—even though by accident— to a part of the forest they would happily live and prosper in.