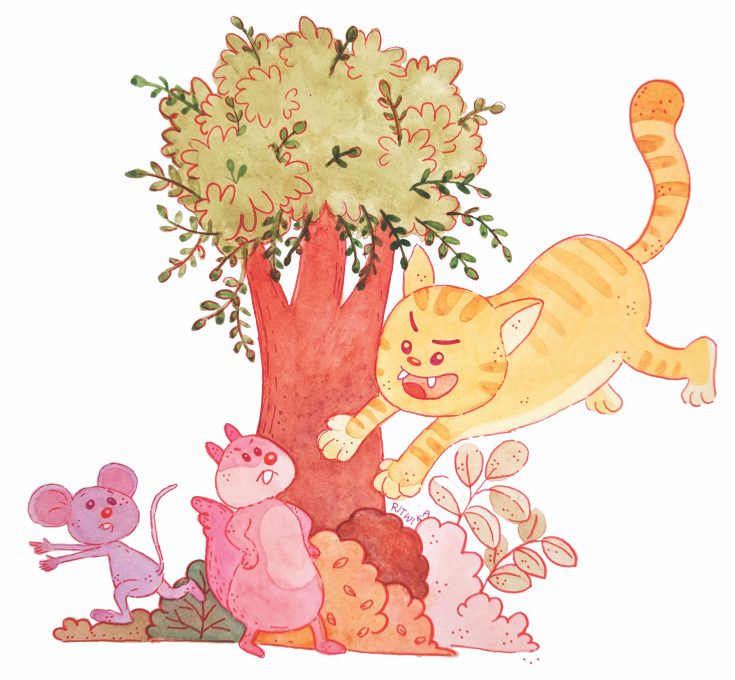 Robbie rat was nibbling on some grains under a tree, when he heard Billu cat approaching. He started trembling. He got so busy looking around to see where Billu was coming from, that he forgot all about running away.

Just as Billu was about to pounce on Robbie, Sweety squirrel jumped in and landed between them. 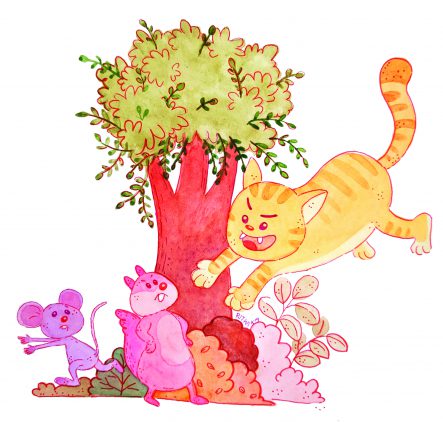 This distracted Billu and Sweety quickly jumped again onto the tree. This gave Robbie a chance to escape and made Billu angry.

Billu mumbled, “That naughty Sweety ruined everything. I’ll take care of her later.” She left from there.

A while later, Robbie came out of hiding and started looking around to see if Billu was nearby.

He was still trembling with fear. He thanked Sweety for her help.

Sweety said, “You could have been killed because of your carelessness. I saved your life today, but I won’t be around every day. Why are you so scared? Listen to me, and stop being so fearful. Billu is not around here anymore and when she is, don’t lose your wits. You must learn to save yourself.”

Robbie took a deep breath and said, “Sweety, I don’t know how to stop being scared. I am never at peace with Billu around.”

“The picture of her fierce face is always on my mind. I feel she will pounce on me any moment,” said Robbie.

“You have called me a friend, and so I’m your friend from today. It is sensible to be scared of Billu. But to be always living in fear—that’s not right! From today onwards, go about your business. We will see how Billu should not scare you again,” said Sweety confidently.

“But if you are not around and I don’t see her coming, and she pounces on me, then what will I do? I wouldn’t even be able to call out for help,” said Robbie, shivering again at that thought. 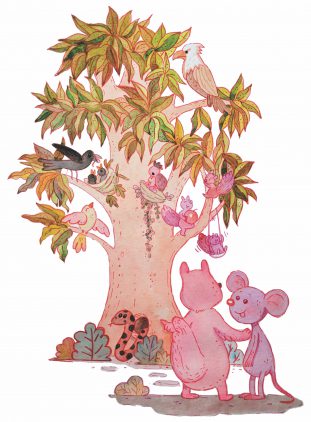 “No, I mean you should be alert, but not scared all the time. Come with me, I’ll show you how enemies can stay together in many different places. They eat and play, enjoy themselves, but are also alert. They aren’t scared all the time,” Sweety explained to Robbie.

“I never thought about it like that. Look at this tree itself. There are so many birds living here. There are crows, sparrows, hawks and also snakes living in holes in the tree. They all live their lives without fear,” Robbie answered.

“See you understood this yourself. When others are not scared, why are you? Now let’s go a little ahead. Let me show you something,” urged Sweety.

Robbie and Sweety set off together. “Let’s go towards the river bank,” said Sweety.

They reached the river bank and saw many goats drinking water from the river. Ducks and buffaloes were swimming in it.

Suddenly, a crocodile rose from the river, and Robbie cried out, “Oh! What a beast! Does it also live in the river?”

“Yes, it does. The river has many small and big fishes. If they were always scared, they would never be able to live their lives,“ said Sweety.

Sweety said, “Earlier, I used to stay on another tree. One day I was watching some peacocks dance, when all of a sudden a tiger came out of nowhere
and pounced on one of them. I simply shut my eyes in fear. When I opened
them again, I saw that the peacocks had flown away.”

“Similarly, I’ve seen deer giving their predator a slip. When I saw these different animals living without fear and with confidence, I too followed their example. All I do now is stay alert. Carelessness can cost lives. So one should always be careful and alert but not scared,” explained Sweety.

“Yes, I understand you. But tell me something, why did you leave the forest and
come to the city?” asked Robbie.

“When humans started cutting down trees in the forest, I had to leave it and come here. I now live here peacefully, and also I have you as my friend!” said Sweety, happily.

Robbie said, “I too am pleased to have met you. Shall we leave for home now?”

“Yes, let’s go!” and both of them started walking back.

As they neared their home, they saw Billu approaching them.

This time, instead of being scared, they quickly changed course and hid in hollows of a tree.

Sweety said, “That was a nice outing. Let’s rest, and then we can play together.”

“And we’ll not be scared of anyone! Thanks, my brave friend!” said Robbie and went to his bill.

Robbie no longer felt scared and nervous as before. Sweety’s encouragement had made him brave and smart. 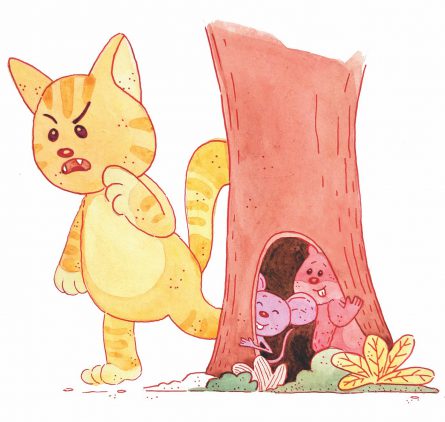