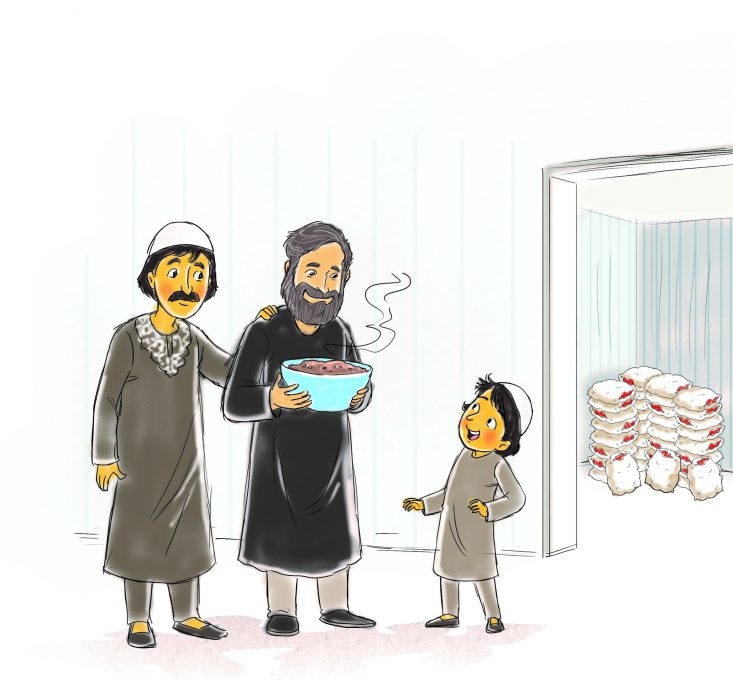 The chinar trees were dotted with snow, glistening like crystals. The whooshing winds signalled winter was here. It was a Sunday and usually, the children would have been running, chasing each other through the maze of the narrow streets of Srinagar. But Sundays had been deserted for more than three months in this city.

Hassan came and plopped himself on the soft carpet. The school was shut and Hassan missed his friends. 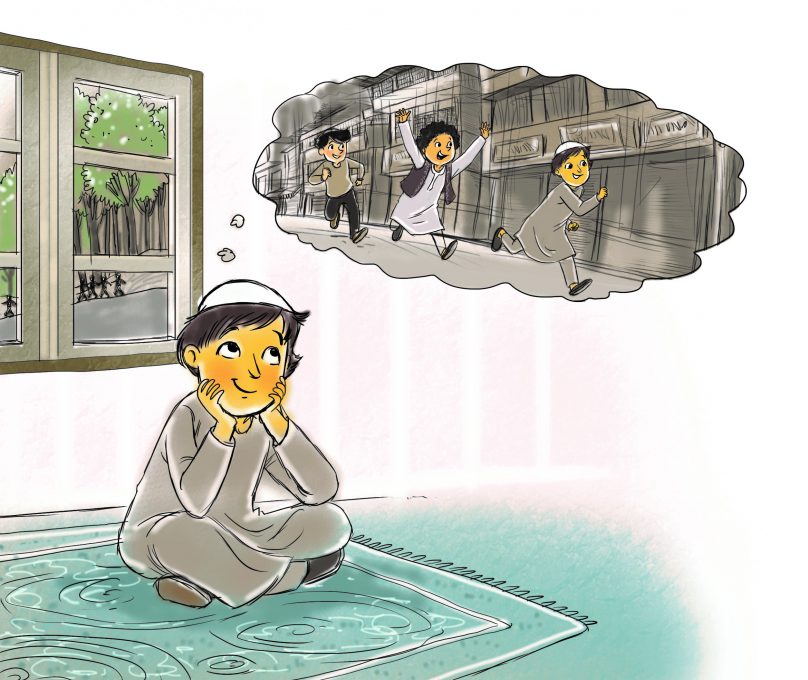 He looks at the clock and wonders if it’s time for lunch. He can hear marching sounds coming from the street. These sounds startled him but before he could react, he heard the sound of pots and pans coming from the kitchen.

He grins and pats his belly and tiptoes to peep in.

Though there had been rationing of potatoes for the last month and a half, because markets had been shut, yet Ammi had been able to cook his favourite dum aloo, this Sunday.

When he peers in, Hassan is surprised to see Abba not Ammi in the kitchen.

“Hassan, have you finished the lesson for the day?” asks Abba as he turns around with a ladle full of dum aloo in his hand. Abba and Ammi have been taking turns at homeschooling Hassan. 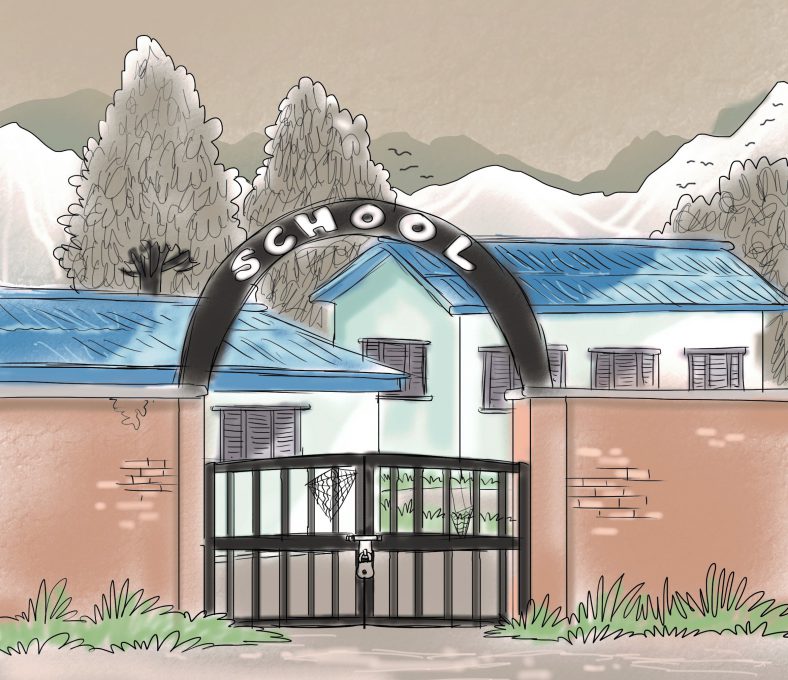 Abba used to ferry tourists on the Dal Lake in his beautiful shikara during the summers and used the boat to transport flowers during the winters. But there had been no tourists for the past three months, forcing him to lock the shikara and help Ammi to weave shawls.

“Where is Ammi and why are you cooking?” Hassan asked suspiciously. While he has seen Abba cook before, he always associated cooking with Ammi.

“It’s my cooking Sunday, beta. Ammi has gone to find some work. Shall I set the table for lunch?” Abba asks and smiles.

“Yes Abba. But what’s for dessert?” Hassan looks at Abba and asks, impatient to hear his answer.

“Ammi didn’t have time to cook dessert and I didn’t cook one,” Abba says, sadly.

Hassan could feel his heart drooping like an autumn flower. Sundays were always about dum aloo and halwa.

Abba pats Hassan’s head, “Do you think we can make some halwa, together?”

“Okay. Which halwa would you like me to make? How about apple halwa?” said Abba and pointed to the huge sack of apples lying in the corner of the kitchen. 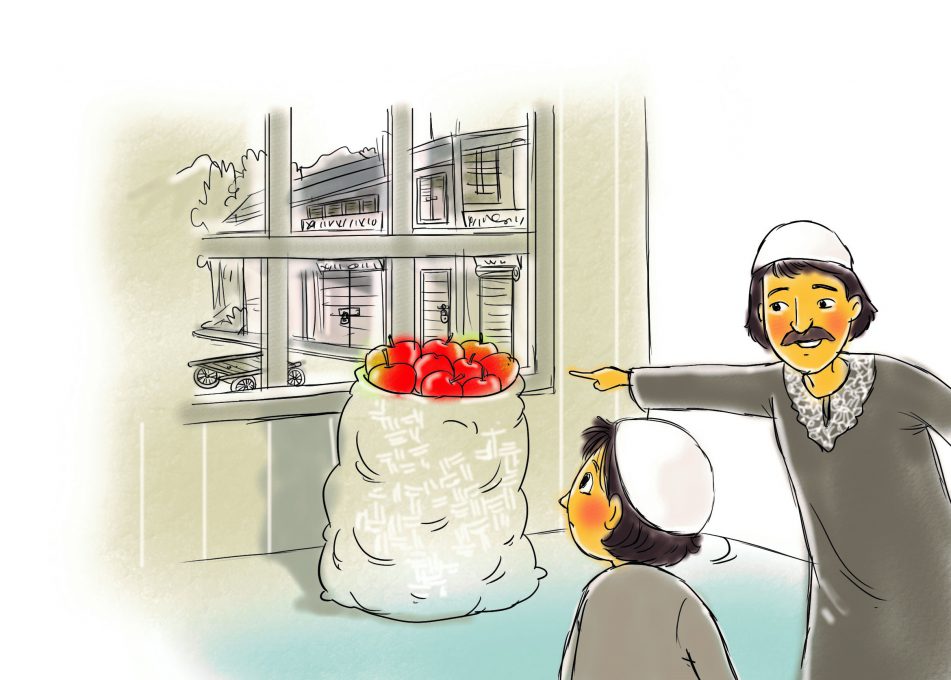 Amir chacha had gifted them two sacks of apples a few days ago and Abba had accepted one. Hassan was used to fresh apples from the market in the autumn and winter seasons, but markets had been shut and he was glad to receive the gift.

He remembered the expression on chacha’s face when he had come home. Walking on roads was forbidden, crowds were forbidden, schools and colleges were closed, playing on the roads were not allowed and Hassan barely remembered the ring of a mobile phone.

And then there was a curfew at odd times. He hadn’t experienced silence like this, ever before.

“Abba, why did Amir chacha give us a sack full of apples?” he asked.

“Amir chacha is trying to distribute all his apples because the markets have been shut and he doesn’t want the apples to rot. He sells apples to earn money.”

“But why are the markets shut every day, Abba?” Hassan asks the same question for the nth time.

Abba turns around and looks at Hassan, his eyes bleak, “There have been some huge changes in our lives. It will all be back to normal soon, beta. Let’s make some apple halwa.”

Abba sighs and responds, “There has been a major constitutional change
in our state, the state of Jammu and Kashmir.”

“What constitutional change, Abba?” Hassan tries to remember if he was taught the meaning of the Constitution at school.

“There was an Article 370, which was specially made for our state of Jammu and Kashmir that has been revoked.”

“The meaning of revoke is to cancel, Hassan.”

“Why was the Article cancelled, Abba?”

“Because the Indian government felt that was the right thing to do.”

“What does this ‘revoking’ change mean?”

“Hassan, in simple words, there was a law, which provided Jammu and Kashmir with a special status and a separate set of laws. That has been cancelled.”

“Does that mean we are not special anymore?” Hassan’s asked with his eyes open wide.

“Abba, I miss school. I miss my friends,” says Hassan, his eyes welling up and
he sniffles.

Abba envelops Hassan in a tight hug and wipes his eyes. “Shall we make some halwa, beta?

“How can I help?” Hassan nods vigorously as he wipes his face on his sleeves.

Abba picks up some apples and slices them. “Can you get me some sugar?”

Hassan looks at the colourful jars and sees sugar and lifts his arm and pulls down the small tin.

“Now, we let the apples boil and soften and then add some ghee,” Abba picks some orange strands from a small metal tin.

“What’s that, Abba?” Hassan asks as he pulls the ghee bottle from the counter.
“This is saffron. It’s not only tasty but also very good for digestion. So are apples, they are very healthy,” Abba replies.

“I will have two bowls of halwa today.” Hassan grins back at Abba.

Stirring, stirring, stirring. Hassan looks at the way Abba moves the ladle around. Abba cuts some pistachios and almonds and sprinkles them along with the saffron on the top of the cooked halwa. He scoops up some and gives it to Hassan. Hasan tastes the freshness of saffron, the crunch of pistachios and the sweet deliciousness and feels he is in food paradise.

“Do you like it, Hassan?” Abba asks as he lays out the table for lunch.

“I love it, Abba.” Hassan hugs Abba around his waist and looks up at him.

Amir chacha opens the door and smiles looking at Hassan.

“Chacha, we made halwa from the apples you gave.” Hassan jumps up and down with excitement as he gifts the bowl to Amir chacha who invites them in.

As Hassan walks into the courtyard and looks at the piles of apple bundles lying in an adjacent room, sacks bursting at the seams.

“Chacha, there are so many apples. What are you going to do with them?” Hassan bursts out, unexpectedly.

Amir chacha attempts to cover the look of dejection on his face. “I don’t know, beta. I really don’t know.” Abba places his hand on chacha’s shoulder.

Hassan and Abba return home. With two bowls of halwa, they sit down as the crows’ caw. Hassan bites into the almonds with a loud crunch.

“Do you know about the goodness of pistachios and almonds?” Abba asks Hassan. Hassan shakes his head.

“Almonds are full of vitamins and pistachios have minerals.”

“What do vitamins and minerals do, Abba?”

“They will make you a strong boy, Hassan.”

Hassan grins and gives a generous scoop of his halwa to a beady-eyed crow.

“Do we need vitamins and minerals to become a good person, Abba?”

“You just need a good and kind heart for that, Hassan.”

“Abba, I just made up a poem. Would you like to listen?” Hassan bursts into a song before Abba could say anything. 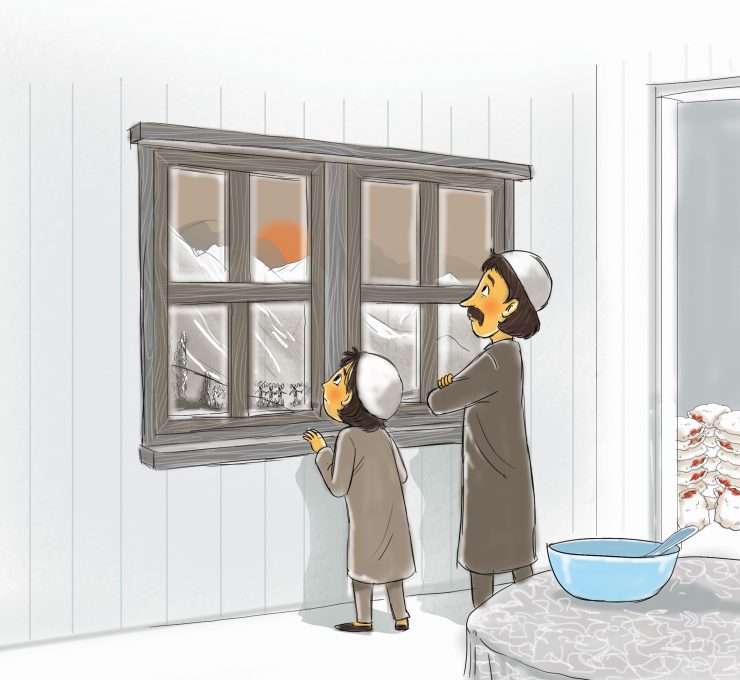 The house echoes with their sound while dusk slowly sets in and all is silent again. The sound of marching feet faintly fills up the void.

One thought on “Hassan Cooks Halwa”