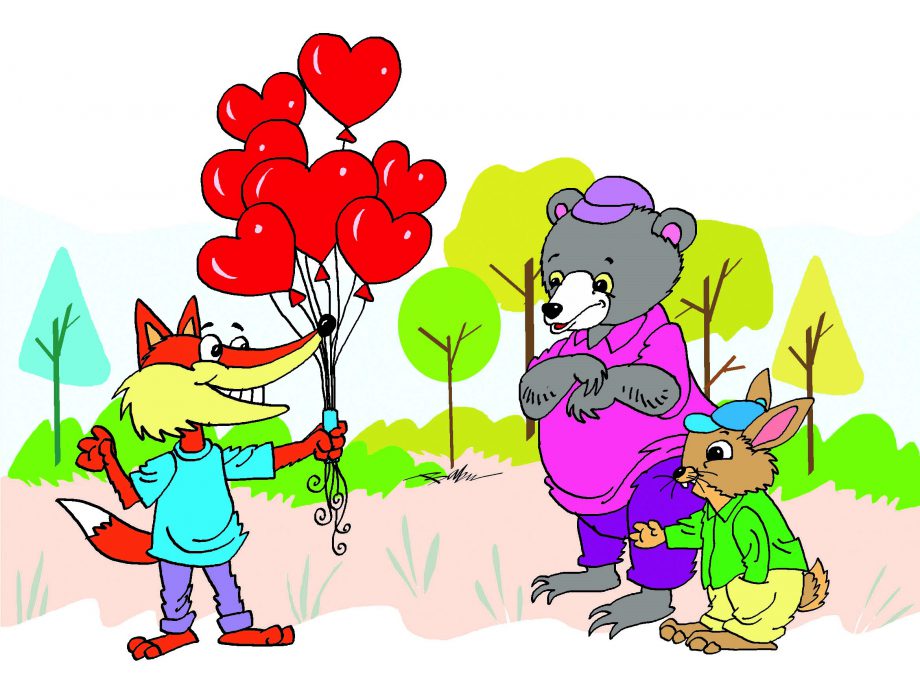 Furu fox was walked around Champakvan, holding many heart-shaped red balloons by their strings in his hands.

He saw Jovi rabbit with Biklu bear and stopped to greet them.

“Apart from the balloons, of course!” joked Biklu. “Why are you carrying so many balloons?” he asked.

“These are for my sweet friends on this sweet day,” said Furu and bowed.

“I am going to get diabetes, because of so much sweetness!” joked Jovi.

“Each of these balloons is a token of my love,” said Furu and bowed again.

“Be careful, Jovi. Furu is behaving out of character,” Biklu whispered to Jovi.

Furu gave one balloon each to Jovi and Biklu saying, “Happy Valentine’s Day, friends!” and went his way.

Then Furu met Lovina boar, Tara tortoise, and Leo tiger, who were all arguing.

“Hey, break it off, everyone! Here, a small gift from me to all of you,” said Furu, handing each of them one of the heart-shaped balloons.

“I am off to distribute more of these balloons to my other friends in the jungle,” said Furu, bidding them goodbye.

All the animals enjoyed playing with their balloons.

“Funny! It’s unlike Furu to be so sweet and lovable,” said Leo.

Just then, Leo’s balloon slipped out of his hand and went up in the air!

Tara immediately caught hold of it but pressed it too tightly. The balloon burst and its shreds fell on all of them.

Leo was heartbroken when his balloon burst.

Soon, his nose started twitching and he started sneezing loudly.

“Aachoo! What’s the matter? Aachoo! I fail to…” said Tara between sneezes. 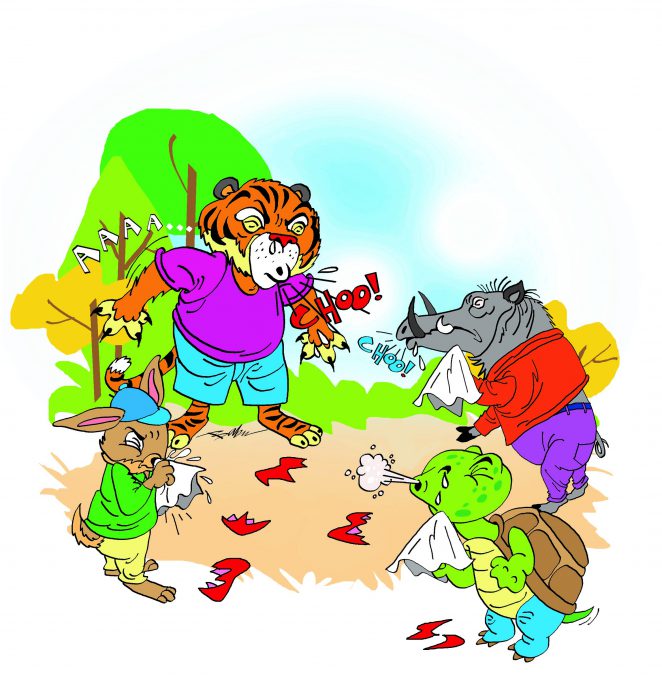 Jovi and Biklu came there, and they too were sneezing every few seconds.

“Aachoo! You all too! Why are we all sneezing so…aa aa choo!?” Jovi sneezed before he could complete his sentence.

“Aachoo! Nobody knows. Is there something in the air?” Tara asked between sneezes.

“We started sneezing right after Furu gifted us the balloons,” said Jovi.

“Wasn’t that a nice gesture from Furu? Where are your balloons? Mine burst,” Leo said sadly, as he sneezed.

“My balloon burst too!” replied Jovi, with another sneeze.

“And then the sneezing started!” said Biklu suddenly.

“That’s right! Only after Leo’s balloon burst, we too started sneezing,” said Tara.

“Do you think Furu put something in the balloons that caused us to sneeze?” asked Lovina.

“I may just know how to find that! Tara and Lovina, please give me your balloons,” said Biklu.

He took the balloons and inspected them carefully, bursting one of them. After a few seconds, the animals started neezing again. Biklu’s suspicion was confirmed.

Then, Biklu unknotted the other balloon slowly and let out the air. Powder-like particles came out of the balloon.

Leo sniffed the powder and gave out a loud sneeze!

“Sneezing powder! FURRRUUUU…wait till I catch you!” roared Leo.

Just then, they heard someone laughing, followed by complete silence.

Biklu looked at the bushes to see if Furu was hiding behind of them and
found a handkerchief on the ground.

He showed it to others. They all realised that Furu had been hiding behind the bushes and had run away. They were all furious at Furu.

“That notorious prankster! He will pay for this,” Leo roared again.

“Let’s take the help of Sona hyena. She is new to the forest, Furu will not suspect her,” said Biklu and shared his plan with everyone. After hearing him out, the animals had a good laugh.

“I can’t wait to see Furu’s face once he is caught in our plan,” said Jovi.

They all went to Sona and requested her to help them teach Furu a lesson. Sona agreed. As planned, Sona took a gift box to Furu and the other animals followed her discreetly.

“Happy Valentine’s Day, Furu!” she said on meeting him.

“What is it?” asked Furu, excitedly. 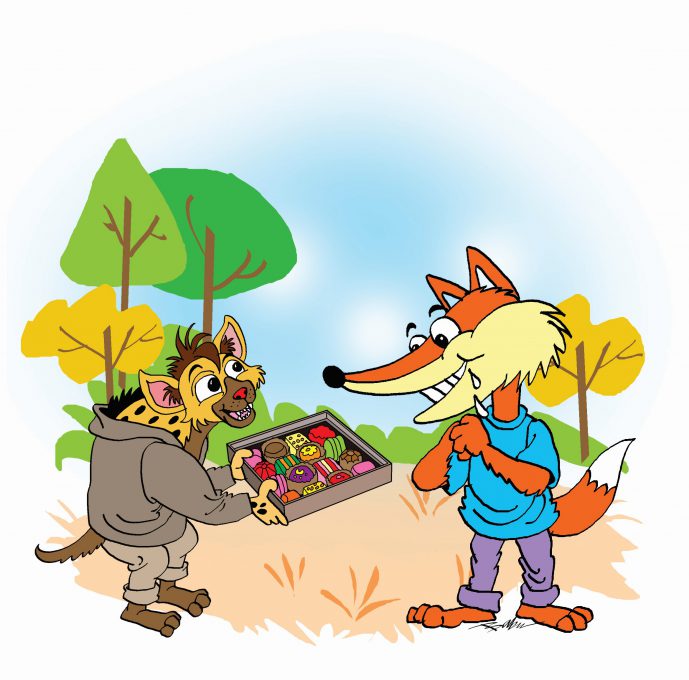 “They are my favourite! Thank you, Sona!” gushed Furu.

“Please enjoy them,” said Sona and went her way.

Sona ran and joined the others who were hiding behind the bushes.

Furu opened the box, picked a piece of chocolate and put it in his mouth. Immediately, he felt his mouth was on fire!

“Aaaaarrrgggg…water…!” he cried out as he dropped the box and ran towards the nearby lake, to drink water to cool down his burning mouth.

All the animals burst out laughing. But Sona was sad.

“I feel bad. I want to apologise to Furu,” said Sona.

They all headed to the lake where Furu was busy gulping down mouthfuls
of water.

“That was a mean trick,” cried out Furu. 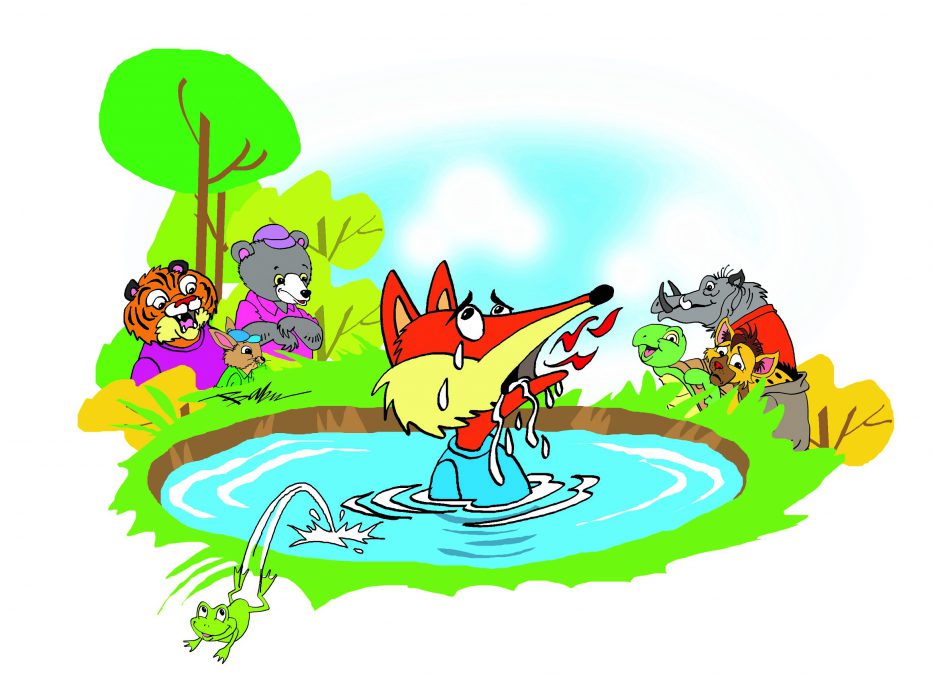 “So was yours, Furu! But let’s forgive and forget. This is a small gift for you to show you that we care,” said Tara, giving him the box of chocolates.

After a moment’s hesitation, Furu took the box and ate one of the chocolates. He apologised to them as well and shared the chocolates, hugging all of them.

“Happy Valentine’s Day!” they all wished each other.

One thought on “Furu’s Valentine!”