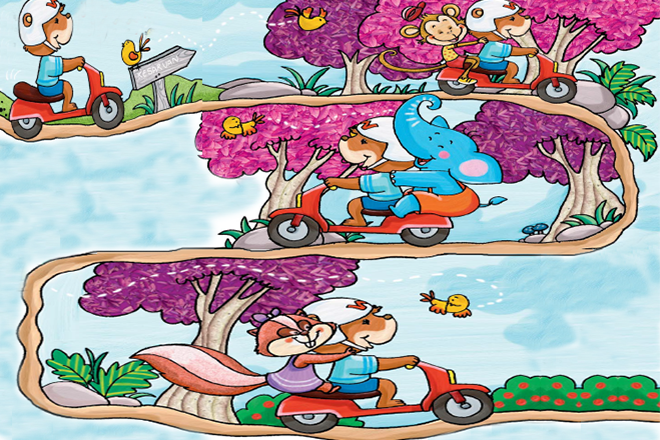 Where are you going, Bunty?” Bunty Bear’s mother asked when she saw him going out of the house.

“Mother,” Bunty Bear replied. “I am going to show my friend Kuki my new scooter. I’ll be back in a jiffy!”

“Back in a jiffy?” Bunty Bear’s mother said. “Doesn’t Kuki live in Kesarvan which is 20 km away from our forest? It will be quite late by the time you return from there. Look! The sky is overcast too. It’s going to rain heavily. I don’t want you to get wet and fall sick, my dear.”

“Don’t worry, Mother,” Bunty Bear said. “I’ll take my red raincoat with me. It matches with the colour of my scooter too! I promise I’ll take good care of myself and not get wet either.”

“Kuki is my best friend. Please let me go. I really want to show him my new scooter!”

“Okay,” Bunty Bear’s mother sighed and said. “Go if you like. But please wear your helmet. And do return home before it turns dark.”

“Thank you, Mother!” Bunty Bear said, running out of the house. “You are the best! Kuki will be really happy when he sees my new scooter! All thanks to you!”

Bunty Bear then wore his helmet and jumped onto his new scooter. He then sped away.

And everyone who saw him turned to admire his red scooter.

It was bright and shiny. Besides, there were no two-wheelers in Kesarvan as yet.

“How about giving us a ride, Bunty?” some of Kuki’s friends asked Bunty Bear. Bunty Bear grinned and willingly obliged. He then gave everyone a quick ride.

When he got tired, Kuki insisted that he visit his house to take a break and eat something.

Kuki had plucked fresh berries and found some extra-sweet honey for Bunty Bear.

“Mmm! Thanks, Kuki,” Bunty Bear said as he relished the treat. “You have served me my favourite things!”

When Bunty Bear finished eating, he realised that it was time for him to leave.

“I must leave now,” he told Kuki. “I told my mother that I will be back before it turns dark. But I promise I’ll visit you again next week!”

Just as Bunty Bear stepped out of Kuki’s house, a loud clap of thunder was heard. Big raindrops then fell from the sky.

“Don’t worry, Kuki,” Bunty Bear said. He then showed Kuki his raincoat and assured him that he would ride his scooter slowly and safely.

Bunty Bear quickly wore his raincoat and put his helmet on.

He then walked towards his scooter and put his paws into his pockets to pull the key out. “Have you dropped the key somewhere, Bunty?” Kuki asked.

He then called out to his parents and asked them to check if the key had fallen anywhere in the house.

They moved the furniture about and even peeped under the beds. But the key couldn’t be found anywhere.

“Oh no,” Bunty Bear said with a frown. “How will I go home now? The rain’s getting heavier and heavier. I will be drenched if I walk home. And I promised Mother that I wouldn’t get wet.”

“Bunty,” Kuki’s mother then said. “Since you can’t find the key and since it is raining so heavily, you should spend the night with us. You will be safe here.”

“Well, I don’t have a choice,” Bunty Bear said as he went back into the house and sat on the sofa.

“Why don’t you take your helmet off now, Bunty?”

Kuki then suggested. “You don’t need to wear it when you are indoors.”

“Right,” Bunty Bear said, taking the helmet off. Plop! Something suddenly fell on the floor.

When Bunty Bear, Kuki and his mother bent down to see what it was, they had quite a surprise.

“Bunty, you are so funny,” Kuki said, giggling. “You had accidentally put your key inside your helmet. You must have done so when you came into the house and left it on the sofa.”

“I’m sorry,” he said as his ears turned red. “What a silly mistake I’ve made! My carelessness has caused trouble for everyone.”

“And do stay on as we had decided. We have already informed your parents not to expect you tonight. I’ll invite Kuki’s other friends to stay with us too. I’ll also make some snacks and dinner. You all can have a party and play some games then!”

“Good idea,” Bunty Bear said as he tucked the key into his pocket.

Bunty Bear then went with Kuki to invite all his other friends for their party.

Everyone had a good time that night, all thanks to Bunty Bear’s silly mistake!