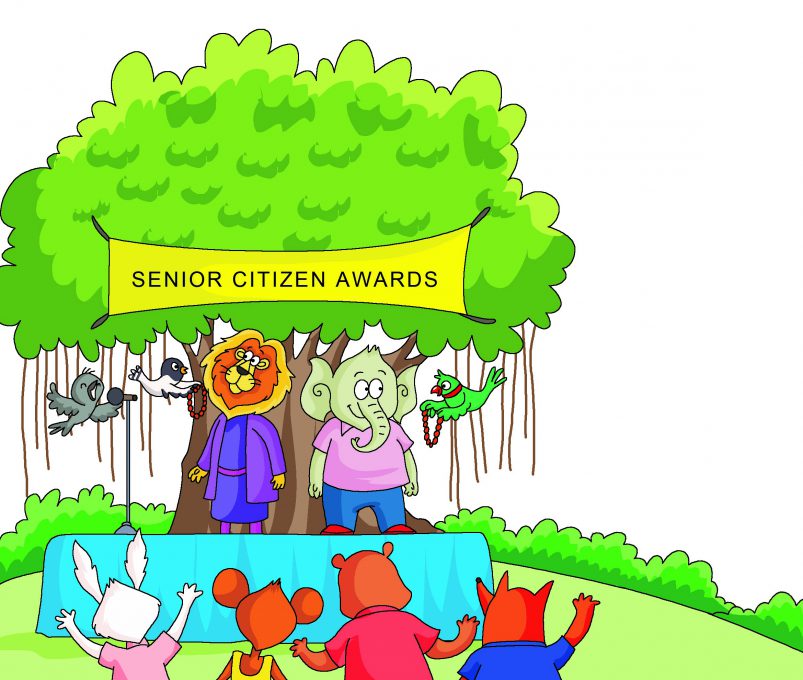 Pihu pigeon was everyone’s favourite in Champakvan for her kindness and manners.

She was adventurous and flying off to faraway places to experience things and new lessons. She loved watching trees, hills, rivers and fields while flying. Her dream was to fly like an eagle above the clouds! 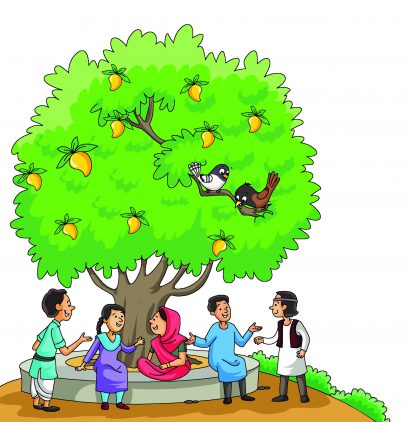 Pihu was friends with Mittu maina who lived in the village near the forest, at a farmer’s house. She would visit Mittu with sweet fruits. Once in a while, Mittu would visit Pihu in Champakvan with corns and wheat grains from her house. Mittu understood human language very well and thus, Pihu was able to learn a lot about human lives as well.

One day when Pihu came to Mittu’s house, she saw her relaxing on the branch of the golden shower tree at the courtyard of the farmer’s house. Pihu sat near Mittu and gave her some fruits. At a distance, she could see a small gathering of villagers. They were discussing something very seriously but happily.

Pihu was curious to know and learn new topics. Mittu knew her friend’s habit. So, she took Pihu to the old mango tree under which the meeting was taking place. Pihu requested Mittu to listen carefully and translate it into bird’s language.

Pihu and Mittu sat quietly on a big branch of the mango tree listening.

Pihu could not understand anything, yet she enjoyed the actions and reactions of the villagers. Finally, there was a huge applause and the crowd dispersed.
Now, it was Mittu’s turn to explain to Pihu.

“When is that?” asked Pihu.

“Hey Pihu, please don’t interrupt. I may forget all the points,” warned Mittu and continued – “I heard about it for the first time. World Senior Citizens Day is celebrated on 21st August every year. The idea of celebrating this day is to raise awareness about the factors and issues affecting older people and also to study issues that affect their lives. Elderly people, these days, are abused in many ways and hence activists have come up with assistance to protect and shelter the elderly.”

Pihu got excited and asked Mittu – “Why were a few people clapping and cheering at the end of the meeting?”

“It is also a day to recognize and appreciate the contributions that older people make to the society. Hence, the Village Head has approved the proposal of honouring such important personalities during the celebration,” Mittu stopped her talk and took a long breath.

“This is really wonderful. We must always respect, support and love our elders. I am lucky to have visited you today or else I would have never learned about it,” said Pihu. 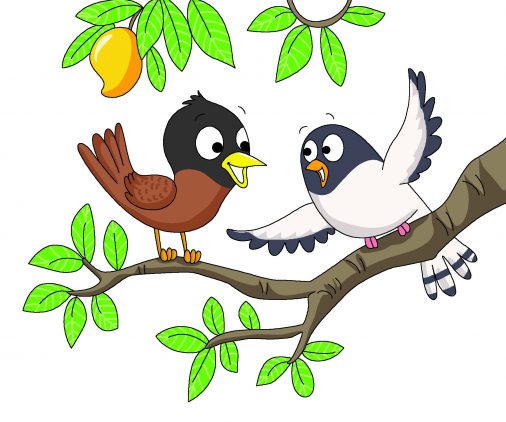 Mittu and Pihu flew back to the golden shower tree. Both of them enjoyed swinging to the waves of the cool breeze. Red dragonflies and yellow butterflies were fluttering around the wheat fields. Sapna, the farmer’s little daughter came out of the house and called Mittu with strawberries in her hand. Mittu asked Pihu to join her to eat the delicious strawberries. Sapna greeted Pihu as well. After a while, Pihu left for Champakvan happily. Her mind was full of thoughts and plans.

Pihu shared the information about Senior Citizens Day with her parents and beloved friends Pyaree peacock, Princy parrot, Sweety siskin and Chinju cuckoo. Pihu too wanted to celebrate the day in Champakvan for the first time by giving a surprise to the older animals and birds. Pihu’s parents loved the idea.

Finally, the Senior Citizens Day was here. All the animals and birds were clueless as to why they were invited. While the birds sat on the branches of the trees, the animals sat under the trees and a few on the black rocks near the waterfalls. There were little monkeys and squirrels who played around joyously.

As soon as Raja Gabru lion came with his minister Jambu elephant, the function began. Chinju cuckoo welcomed all with a melodious hymn.

Pihu told the crowd about the significance of the day and the purpose of the celebration. All were quite surprised on hearing about Senior Citizens Day. There was a big round of applause when Pihu announced about honouring the elderly and old members.

Chinju cuckoo invited the very old Mottu monkey, Bittu bear and Cheeru crow on the stage. Pihu read out the contributions made to Champakvan. Regardless of age and other health issues, Mottu, Bittu and Cheeru had worked hard for the betterment of the inhabitants and the development of Champakvan.

Pyaree peacock and Sweety siskin requested Raja Gabru to present the awards to the honourable guests. All the animals and birds clapped for the guests of honour.

Raja Gabru appreciated the organizing committee for their initiative and goodwill. He presented a bouquet to the little pretty Pihu who had introduced the idea of celebrating Senior Citizens Day in Champakvan. Everybody enjoyed delicious food and chatted happily. 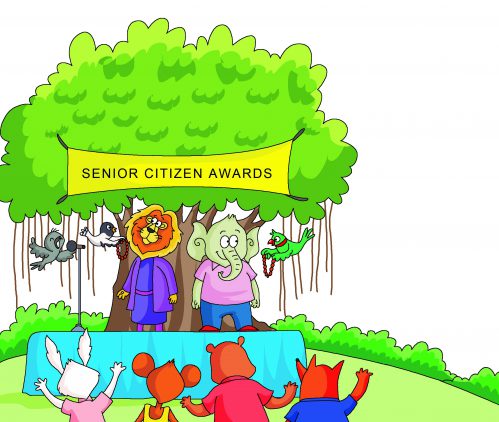