Charlie monkey was a chatterbox. Unlike the others in the forest, his hobbies did not include painting, drawing, sports, or music. Instead, he loved to just keep talking.

He would start talking wherever he went. All he needed was a reason, and he would start telling the whole story. His parents and teachers were frustrated with this habit. They tried explaining to him, “Don’t talk so much! Think before you speak! If you keep talking unnecessarily, you will get into trouble.”

But to no avail. Charlie hardly listened to any advice.

One day, a few guests arrived at Charlie’s house. His mom sent him to the market to buy samosas and told him, “Come back quickly! Don’t get distracted by talking!” 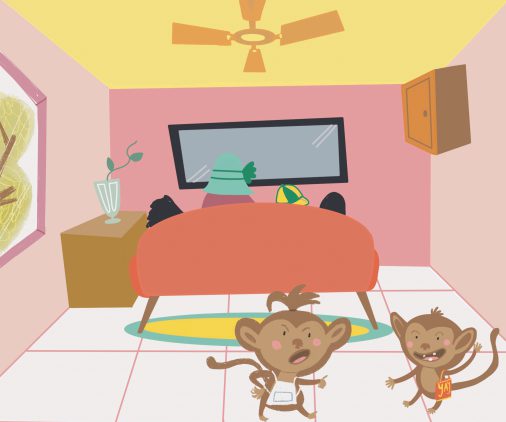 “All right!” said Charlie and left for the market.

He placed his order and was waiting for his turn when Jojo jackal, who was also standing at the shop, noticed him and said, “Hello! Are you Mukesh’s son?”

That was all the reason Charlie needed.

He said, “No, uncle! My father’s name is Manohar, and mine is Charlie. I study in fifth standard in Jungle Public School.” 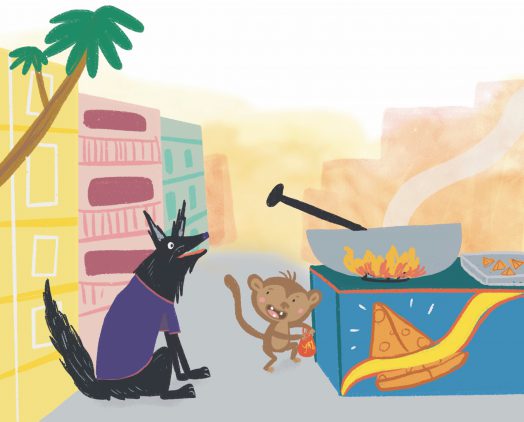 Charlie started again, “Of course, uncle! My dad is a big businessman. The shop ‘Jungle Electronics’ in the main marketplace belongs to us. You can buy the latest refrigerators, televisions, washing machines and air conditioners in our shop along with imported gadgets. You have to go to the shop to make a purchase, but you won’t be able to meet my dad. He will be going out of town for a few days, and the shop will be closed.”

Then Charlie remembered that there were guests at home, and his mom was waiting for him. He took the samosas and rushed home, but the guests had already left by then.

Mom was furious. She said, “There you are! Why did you come back so late? Did you find someone to talk to? Now, eat the samosas yourself! The guests have left!”

Charlie was apologetic and said, “But I was not talking in vain, mom! I met an uncle at the shop who knew dad and wanted to meet him.” And he recounted his conversation with Jojo uncle.

His dad got upset after listening to his story. Charlie thought that his dad would scold him. But his dad left the house at once. Then Charlie went to his room, thinking that the matter was over.

The next morning, when Charlie was getting ready for school, the doorbell rang. Charlie’s mom answered the door, and Inspector Cheetah Singh was standing outside. Two other policemen were holding Jojo as a prisoner.

Seeing Jojo, Charlie said, “Oh! This is the same uncle I met yesterday! He wanted to meet dad!”

“He’s not your uncle! He’s a crook! He collects information about big businessmen and their whereabouts and robs them after finding an opportunity. We’ve been looking for him for a long time. Finally, we caught him,” said the inspector.

Charlie was shocked, and he said, “I thought he needed help. So, I told him everything…”

“But you tell everything to everyone! You never think twice about how much you should share and with whom. When I heard your story yesterday, I realised something was fishy. So, I alerted the police immediately. That’s why we are safe. Otherwise, your ‘Uncle’ would have robbed the shop,” said dad.

Charlie’s dad thanked Inspector Cheetah Singh for his timely action. The police left, taking Jojo away with them.

For the first time, Charlie regretted his habit of excessive talking, which could have resulted in a huge loss for them. His eyes welled up with tears. He promised his parents that in the future, he would never speak without thinking.