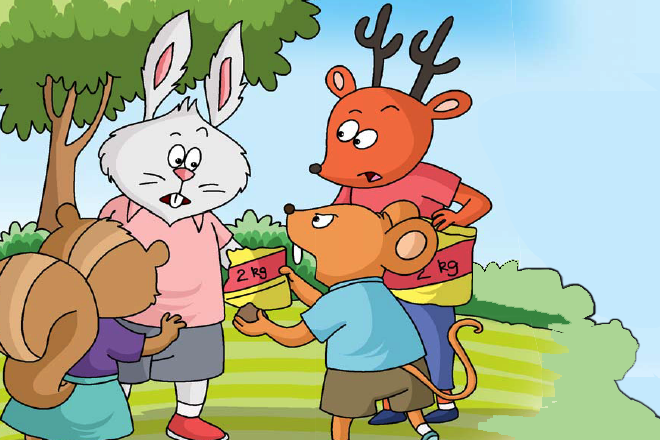 Cheeku rabbit was on his way home when he saw a group of animals discussing something. They all looked troubled.

“We have been tricked by a duo selling detergent powder,” said Dinky deer. “They gave us a bottle of perfume free with each packet we bought as well as a prize coupon.”

“The two told me that if I bought the detergent, I had the chance to win a television set or a washing machine,” said Squiggy squirrel.

“But what is the problem?” asked Cheeku.

“When we opened the packet, it was filled with sand!” said Squiggy.

“We have filed a complaint with the police. Inspector Blacky bear has promised to look into it,” said Monty mouse.

Cheeku thought for a while and asked, “Would you be able to describe how the two tricksters looked?”

“Yes! We remember them very well,” said the other three. “Both of them were pot-bellied. They had white beards and long, white hair. They also had long, bushy tails.” As they described their features, Cheeku quickly took out his diary and drew rough sketches of the two animals.

After he was finished, Cheeku studied the sketches and felt that they looked like Baddy and Laptu.

“But Baddy and Laptu are not pot-bellied and neither do they have white beards,” Cheeku thought to himself.

Cheeku decided to keep a watch on Baddy and Laptu for the next few days.

Early next morning, Cheeku hid behind a bush near Baddy’s house and kept a close watch. After a while, Baddy and Laptu came out of the house and walked down a path leading out of the forest. Cheeku followed them.

Baddy and Laptu walked until they reached an abandoned house on the outskirt of the forest. They discussed something and then headed into the house.

“I wonder what those two are up to,” thought Cheeku. “There are no bushes to hide in here. I better climb that tree. That way I can stay hidden and still observe them.”

After some time, two potbellied animals came out of the house. They had long, white hair and beards. Cheeku was surprised. “These two look just like the two animals Dinky, Squiggy and Monty described,” he thought. “Do Baddy and Laptu know them or…”

Just then, Cheeku saw one of them pull the beard from his face and scratch his chin.

“This beard is very itchy,” said one of them who sounded like Laptu.

That is when it all became clear to Cheeku—the two were Baddy and Laptu! “They must have disguised themselves with wigs and fake beards. Looks like they have also stuffed their shirts to make it appear as if they have pot bellies,” thought Cheeku.

Cheeku followed them for a while. As suspected, Baddy and Laptu went from house to house, selling fake packets of detergent powder.

Cheeku dashed to the police station and informed Inspector Blacky who followed Cheeku to the street where Baddy and Laptu were. They were busy selling a packet of fake detergent powder to Jumpy monkey and Donna cat.

When Baddy and Laptu saw Blacky, they panicked and tried to flee. But Blacky swiftly caught them. Cheeku opened Baddy’s bag and showed the packets of sand to Blacky. Blacky arrested the two of them and thanked Cheeku for his help in catching the fraudsters.