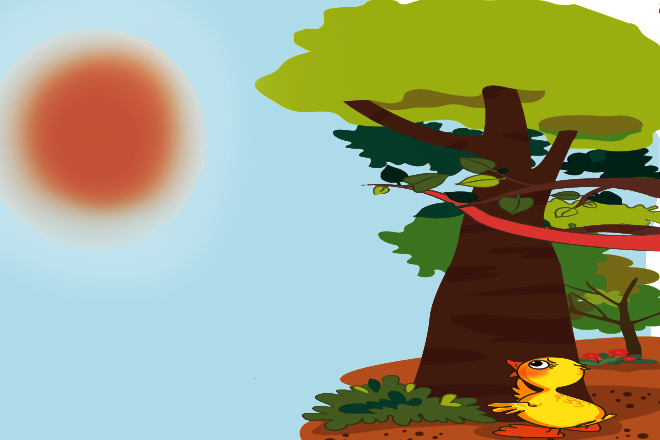 Dixie duck and her seven chicks lived in the forest of Everwood. Whenever Dixie stepped out, her chicks would follow.

Every day, they would go to the store and then head to the pond for a swim, before returning home. On the way back, they would stop over at Pinto, the donkey’s house for a quick hello.

Among the chicks, Trixie was the most mischievous one. She would eat her siblings’ share of food, peck them when they were asleep and play tricks on them. She would venture out on her own and stray from her mother when they went out together.

Dixie shared her worry with Pinto. “I am worried about Trixie. She roams around on her own without telling me. What if something happens to her? No matter how many times I tell her, she never listens to me,” said Dixie.

“Don’t worry, Dixie. She just likes exploring her surroundings. Moreover, everyone knows her in this forest, so even if she does get lost, she will be able to find her way back,” consoled Pinto.

One day, Dixie had to make a quick run to the store leaving her chicks at home. Within a short while, Trixie started feeling bored and decided to go out on her own. Her siblings tried to stop her, but she did not listen to them.

After walking around for some time, Trixie decided to head back home. But she realised that she had ventured farther than usual. She couldn’t figure her way back, and began to panic.

Trixie saw a parrot sitting on a tree and asked, “Do you know the way to the pond?” “No, I don’t. But you look hungry. Do you want a piece of my guava? It is sweet,” offered the parrot.

“No, thank you. I am not hungry. I just want to go home,” said Trixie and walked on.

“After some time, Trixie met a squirrel. “Have you seen my mother?” she asked.

“No. But do you want to rest in my house for a while?” asked the squirrel.

I want to go to my mother,” replied Trixie.

Trixie continued to walk until she reached the river. There she saw a frog eating some insects.

“Have you seen my mother?” Trixie asked the frog.

“No, I haven’t. You look tired. Drink some fresh river water and eat some insects. You will feel better,” said the frog.

“No, thank you. I only want my mother,” said Trixie, walking away.

Jojo, the jackal had been following Trixie since the time he found her talking to the parrot and learnt that she was alone and lost. He had been waiting for the right moment to pounce on Trixie and make a meal out of her.

When Trixie walked away from the river, Jojo came up to her and said, “Hey, little one. I saw your mother just now. She is there, behind that bush, looking for you.” Trixie became elated and ran towards the bush. As soon as she turned her back, Jojo pounced on her and pinned her to the ground. Trixie started crying.

Suddenly, someone hit Jojo on the head. It was Pinto! Jojo became scared and ran away.

“Uncle Pinto! I am so glad to see you! Thank you for saving me from that jackal,” said a relived Trixie. “But how did you find me?”

“I have been following you since the time you left home. Your mother knew you would be up to some mischief, so she asked me to keep an eye on you,” said Pinto.

“Then why didn’t you help me earlier when I was lost?” asked Trixie.

“I didn’t help you because I wanted you to learn a lesson. But when I saw that jackal, I knew I had to step in to save you. Now do you realise why your mother worries about you and asks you not to go out on your own without informing her?” asked Pinto. “Yes, Uncle Pinto. I have learnt my lesson. I will listen to my mother and not venture out on my own,” said Trixie.

“Good. Let me take you home now. You’ve had enough adventure for one day,” said Pinto.

When they reached home, Dixie was happy to see Trixie back home safe. Trixie narrated what had happened and apologised to her mother. “Thank you for saving my little one, Pinto. I am sure from now on Trixie’s mischief will be restricted to the house,” said Dixie smiling