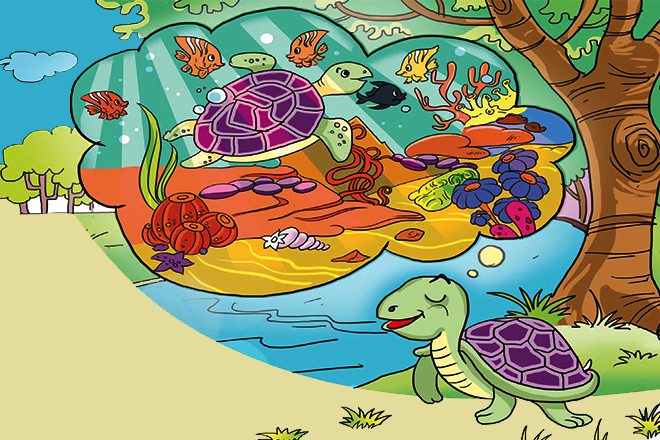 All the animals in Shringar forest lived in love and harmony. Kutkut squirrel, Minku monkey, Chatori sparrow, Bhola bear and Kuchoo rabbit lived along the river which flowed through the forest. Kachaalu tortoise also lived in the river. Unlike everyone, he was very proud and arrogant by nature.

Kutkut squirrel lived on the tree near the river and tried to make friends with Kachaalu who would not speak to anyone. He was always ready to pick a fight with anyone he could find. He was very proud of his personality and looks. He ignored all the animals of the Shringar forest.

If any of the animals wanted to ride along the river on his back, he would not answer them or he would take them and topple them midway inside the river and mock them.

Kachaalu would say, “I am not a tortoise up for rides. I am here to take the world for a stride! I am best suited for the seas and not this river.”

Kutkut squirrel, Minku monkey, Chatori sparrow, Bhola bear and Kuchoo rabbit would play in the forest the whole day. Unlike them Kachaalu would stay away, building castles in the air. One day Kachaalu asked everyone to gather and declared, “I am travelling towards the larger part of the world, the sea. All of you continue your stay in this small Shringar forest while I am off to have some fun!”

Having said this, Kachaalu set out on his journey. After swimming for a week, he reached the sea and was overjoyed at the sight of it. Tears rolled down Kachaalu’s eyes. He now missed the love and affection showered on him by the animals Shringar forest even though he had always quarrelled with them.

“No one is concerned about me here!

Neither do they want to be friends with me nor are they are bothered about my welfare,” he thought to himself.

Kachaalu thought of going back to Shringar forest. But what would he do if everyone in the forest laughed at him.

On reaching Shrinagar forest, Kachaalu saw his friends looking worried. He asked Kutkut squirrel, “Oh Kutkut, why are so sad?” At the sound of Kachaalu’s words she jumped in surprise.

“Hey Kachaalu, Are you fine? We were all worried about you,” she said with happiness.

Hearing her words, Kachaalu started to cry. “Please forgive me, my dear friend. You always tried to love me but I was too proud. I should leave from here. I don’t deserve your love.”

Just then, Bhola bear said, “No, my dear friend, you are not going anywhere. This Shringar forest will always continue to be your home as it has been till now. Wipe your tears and give me a hug.” Putting an end to this, all the animals rushed to hug Kachaalu.

Shringar forest thus was once again home to lots of love, joy, harmony and happiness.