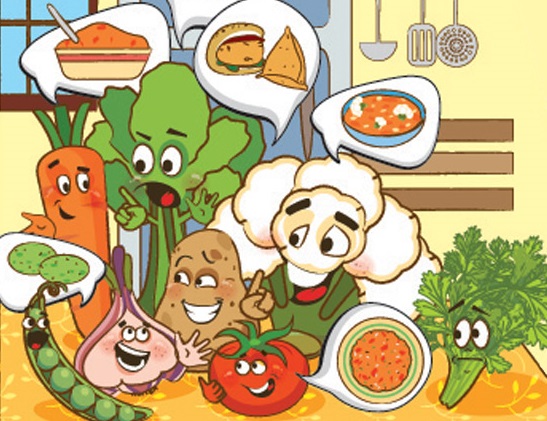 Ayush’s mother returned from the market after buying vegetables. The next day was Aayush’s birthday and many of his friends had been invited home for dinner. His mother planned to make Aayush’s favourite dishes: vegetable pulav, aloo–mutter, palak-paneer and carrot.

Aayush’s mother took out the vegetables from the basket and laid them out on the table. She was about to put them in the fridge when she realised that it was time to pick up Aayush from the school. So, she left them as they were and left for Aayush’s school.

Seeing no one was around, the vegetables began chatting among themselves. “I am the best among all of you,” said the potato proudly. “Everyone likes me. I can be boiled, fried, roasted or mashed to make several tasty dishes like vada pav, samosa, sandwich and pakoras!”

“Oh, that’s nothing! I am an essential ingredient in most dishes,” retorted the onion. “You just can’t make the dishes planned for the birthday dinner tomorrow without me. Moreover, people relish onion pakoras during rains; actually, they love to eat me any time!”

On hearing this, the carrot declared, “I am the best! Besides being added in the pulav tomorrow, I am also the star ingredient of Aayush’s favourite carrot halwa, which will also be served tomorrow! You don’t need potatoes and onions for it. I am so good for health that many even eat me raw.”

“I too am used in so many dishes besides the pulav,” said the peas. “Aaloo mutter, mutter paneer, mutter pooris, mutter patties…the list goes on!”

The cauliflower was not to be left behind. It said, “They use me to make most of the dishes you are used in as well. I am also used to make tasty gobi parathas, soups and salads.”

Then the tomato spoke up. “I am used in many preparations too. Several tasty gravies and sauces are made out of me. I am used in all types of cuisine,” it said.

More From Champak: The Proud Tortoise

“You all may be used in different kinds of dishes, but I am the healthiest of you lot,” said the spinach. “I contain all the nutrients necessary to maintain good health. In fact, doctors recommend eating leafy vegetables as much as possible. That is why I am the best.”

While the vegetables were quarrelling among themselves to prove that each was better than the rest, the coriander listened to them quietly. Finally, it spoke up. “I have heard all of your arguments and you are all right. Each of you has some benefits, but that does not mean one is greater than the other. We are all an essential part of the human diet,” it said. “There are many preparations in which all of you are used like the pulav that is going to be made tomorrow. In the end, I will be added on top to garnish the dish. That does not decrease my worth. When we are all added together in the correct measure, people relish us,” the coriander added.

The coriander’s words made all the other vegetables realise that all of them are indeed equal. All the vegetables became friends and apologised to each other.

Just then, Aayush and his mother returned from school. As soon as Aayush saw the vegetables on the table, he became happy. Tomorrow, his mother was going to make his favourite dishes using all of these vegetables. The vegetables too shared Aayush’s excitement. One thought on “All are Equal”

At the vegetable shop