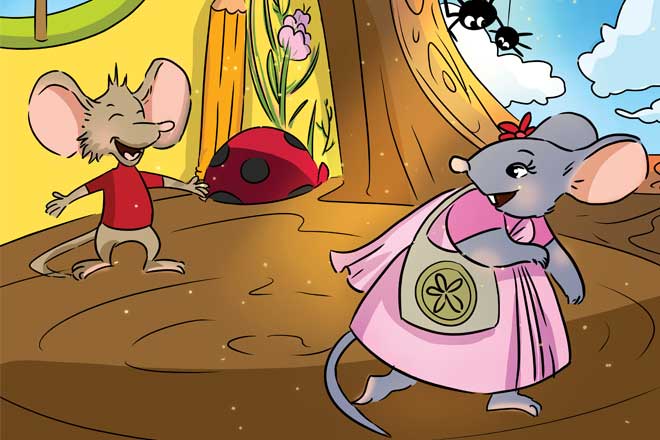 Musu, the little mouse lived with his mother inside the hollow of a mango tree. His mother worried about him a lot as he was quite gullible and careless. So, she constantly had to keep an eye on him.

One day, Musu’s mother had to go out to run an important errand. Before leaving, she told Musu, “Son, I’m going out for a while. Don’t go out of the house till I’m back. And do not open the door to any stranger. There are wild cats around. They are always looking for an opportunity to prey on us.” “I will be careful, Mom,” assured Musu.

As soon as his mother left, Musu locked the door from inside. He laid down on his bed and started reading a story book.

Only a few minutes had passed when he heard a voice outside the door: “Free sweets for everyone! Free sweets!”

Musu ran towards the door but then he remembered his mother’s warning and stopped.

A while later, Musu heard the voice again: “Free sweets for everyone! Come and get your free sweets!”

This time, Musu could not resist going out and getting the free sweets. Overcome by greed, he opened the door. He peeped outside but could not see anyone.

“Whoever was giving away free sweets must have gone on ahead,” thought Musu, stepping out of the house.

Suddenly, Bobo, the scary, black cat, who was hiding behind a tree, jumped right in front of him. Musu panicked. “You foolish mouse! There are no free sweets. Instead I get you as my free dinner,” said Bobo, eyeing Musu greedily.

Musu regretted not listening to his mother. Tears welled up in his eyes. He wouldn’t be able to outrun Bobo. Just as Bobo was about to strike him down with her paws, Billu, the cat arrived at the scene. His mouth started watering at the sight of Musu.

“This is my neighbourhood. Only I have the right to this mouse, not you,” Billu told Bobo.

“I lured this mouse out of his home. So, rightfully, he’s mine!” snapped Bobo.

Both Bobo and Billu started arguing.

“As if one cat wasn’t bad enough, now, I have to escape from two cats!” thought Musu, trembling in fear. Musu remembered his mother’s words. “When faced with a difficult situation, keep calm and think rationally,” she had told him.

So, Musu thought calmly and came up with an idea.

“Stop fighting, you two! I have come up with a way to settle this,” said Musu, interrupting the cats’ quarrel.

Musu took out a coin from his pocket and said, “I am going to toss the coin now. You have to accept whatever the outcome will be.”

Musu deliberately tossed the coin so high that it got stuck in the branch of a tree. “Do you think we are stupid? What if you run away? We will come with you too,” said Bobo.

“You are right, Bobo! This mouse is trying to fool us. We shouldn’t let him go alone,” agreed Billu.

Thus, the three of them climbed up the tree and Musu managed to retrieve the coin.

“Come, let’s go down and toss it again,” said Bobo.

“If we go down and toss it, it might get stuck in the tree again,” said Musu.

“What do we do then? How will we decide without a toss?” asked Bobo.

“Let me drop the coin from here. Then we can go down and see the result,” said Musu. Musu deliberately threw the coin a little further away from the tree. Billu and Bobo immediately ran after the coin to see who won. That was exactly what Musu was waiting for. He quickly climbed down the tree and ran towards his house.

After reaching for the coin, the cats realised that Musu was running towards his house.  They tried to catch him, but it was too late. Musu had already reached his house and quickly shut the door behind him.

Musu heaved a sigh of relief. He was amused at how he managed to fool the two cats. Bobo and Billu were disappointed that they let their prey get away from right under their noses.