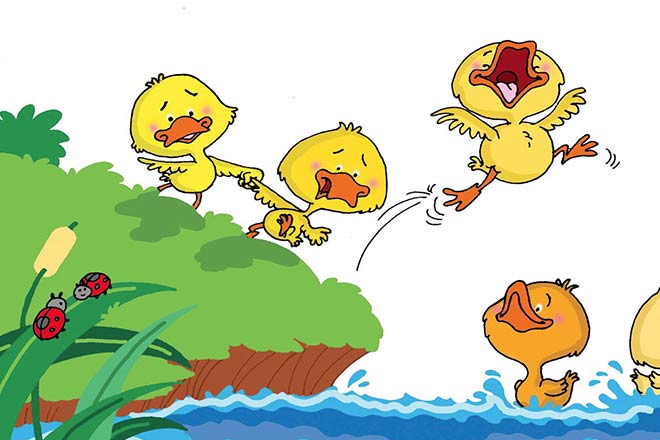 All the 7 tiny yellow-coloured chicks were looking very cute with Tina Duck. “Today I will teach you to swim in a pond,” One day Tina told them.

All of them reached the pond side. Tina taught everyone how to waddle in the water and told them to descend in the pond behind her.

Tina went down in water. 5 chicks too went with her, but Nikku and Tikku did not go with them.

Tina called them many times, but they started crying, “The water will be cold, we will drown.”

Tina said, “The membrane which we have in our feet serves as a paddle, nothing will happen to you.” But both of them didn’t listen to her.

The 5 chicks that had been in water were very fresh whereas Nikku and Tikku were feeling sluggish.

They both were surprised thinking that why their siblings were not feeling cold even when the weather was chilly.

Even after many days, Tina hadn’t succeeded in making Nikku and Tikku swim in water. That day too Tina was swimming with her 5 chicks while Nikku and Tikku were watching them standing at the bank.

Suddenly 3 big goats with their horns bent, came running towards them and said, “We will eat you all.” Even their voice was very frightening.

Both the chicks got terrified and ran calling ‘Mom…mom…’ to save themselves. They were surrounded by the goats from 3 directions. So they jumped in the water out of pressure.

They started waddling as their mom had taught them. They were feeling amazed that they were neither feeling cold nor were they drowning.

In fact, they enjoyed their stint in water. They swam for a long time. After coming out they were feeling very refreshed. “There is a gland under the tail of ducks which secretes oil. It has a particular odour too which can tell anybody about our whereabouts.

That oil spreads on our wings and that is why we don’t get wet or feel cold. You are very young. Your body doesn’t secrete that oil, so I had put mine on your body. The oil is light floats on water and doesn’t let us drown.”

“Really? That is why we could swim so easily. We enjoyed so much. Mom, it was good that the goats came and frightened by them, we got down in the water. Now we will swim daily.”

“All of them are my friends. I had told them to scare you so that you would come into the water,” Mom said smilingly.

All the three goats laughed and came out from behind the nearby bushes. Tina thanked them and said, “My chicks aren’t scared of water anymore because of you all.”

“I was in the bushes, incubating the eggs. So I didn’t come out,” Tina told them.

“But we couldn’t smell your scent?”

“Yes, nature has made this arrangement to protect us. While we are incubating, our glands stop secreting oil and hence the scent stops. Our enemies don’t come to know where we are and we are able to nurture our eggs without any worry.”

“Wow…that is great. Bring your chicks to our home someday. It’s been long since we all have eaten together.”

Saying so, the goats went away.

The chicks too walked towards their home behind their mom.