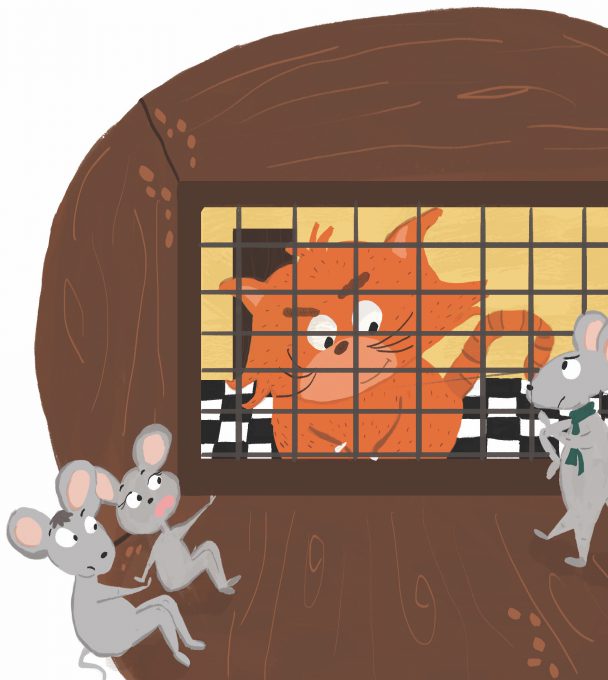 Rizo mouse was returning home. On the roadside, Coco cat was walking with a limp.

“I have sprained my ankle. Will you please help me walk to my house?” Coco requested Rizo.

“I don’t trust cats. What if you eat me?” Rizo said, walking away quickly.

“Oh, kind mouse! Please don’t be afraid. I have stopped eating mice. I am a vegetarian. My ankle is sprained and I am unable to walk. It would be very kind of you to help me walk to my house,” said Coco with an innocent face.

Rizo felt pity for Coco and decided to help her reach home.

After reaching home, Coco smiled and said, “Thank you for your help! You must be exhausted with the heat outside. Come inside and have a cool drink. You’ll be refreshed.”

Since Rizo’s mouth was dry, he agreed and went inside the house with Coco.

She got a glass of cool drink from the kitchen.

After having the drink, Rizo was ready to leave. Suddenly, his head began to spin and he fell down.

Waking up, he found himself inside a wooden rat cage. On one side of the cage was a little door. On the other side, there was an iron net. Besides him, there were two other rats inside the cage.

After a while, the door opened and Coco entered the room. “This cat cheated and trapped me,” Rizo murmured to himself. 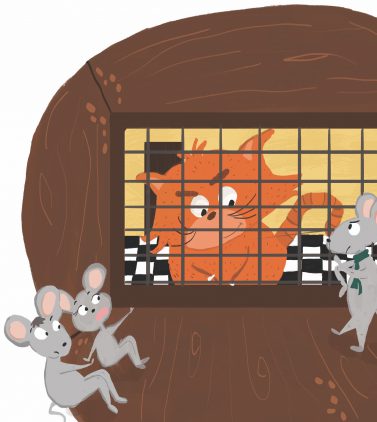 Looking at Rizo through the iron net, Coco made a frightening face and said, “To trap clever mice like you, I have to take the path of cheating. Otherwise, what will I eat? I will die of starvation.”

“I made a mistake in trusting you,” said Rizo.

“A cat and a mouse can never be friends. Who makes the mistake has to suffer! Sit here and count your days. I am travelling for two days. On returning, I will eat you as my delicious meal,” said Coco and threatened the mice with her sharp claws.

Coco opened the cage’s door and slid a bowl of water and bread inside.

“I am keeping the food here so that you don’t die out of hunger and thirst,” and Coco locked the door and walked away.

The other two trapped mice were Kukoo and Neeloo. They too had been cheated and tricked by Coco.

“There is no point in crying over what has happened. We have to find a way to get out of this cage. We only have two days,” Rizo said to Kukoo and Neeloo.

“It is impossible to get out of this cage,” said Neeloo.

“Yes, even I have tried several times. My teeth can’t even drill this wooden door,” Kukoo added.

Rizo looked at the two mice and said, “Look, friends, the three of us must find a way out of this trap. Otherwise, the evil cat will eat us.” 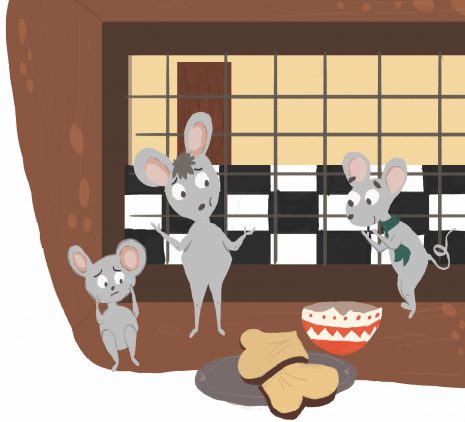 They began thinking of ways to escape.

Rizo used a lot of force and tried to break the door of the cage. However, it was sturdy and did not break. Besides, there was also a lock at the door. All his efforts were in vain.

Just then, the bowl of water caught Rizo’s attention. He observed the bowl carefully. The bowl was old. Its surface had a lot of lines and there was a crack in it.

Rizo picked the bowl and started to break it with his sharp teeth. Kukoo and Neeloo stared at him.

After a while, Rizo succeeded in breaking the bowl into two pieces. He then picked up a piece to use it like a knife. He held the smooth edge and placed the sharp end on the other side of the iron net.

“Now, I will try and cut the iron net with the help of these pieces. If we take it step by step, we will be able to cut the net in a short while,” Rizo explained and handed one piece to Kukoo. They began to tear away the net.

When Kukoo got tired, Neeloo took over. And like this, the three mice took turns in cutting the net of the cage.

After a few hours, there was a slight tear in the net.

“Hurray! Friends, we are making progress. Just a few more turns and we will be free from this cage,” Rizo encouraged Kukoo and Neeloo.

The three continued to cut the iron net.

After a few hours, the net had been torn from one corner.

Rizo bent the torn portion with his paws. There was enough space to get out of the cage. First, Kukoo came out, then Neeloo followed and at last, Rizo came out.

Coming out of the cage, the three mice breathed a sigh of relief.

They spotted a small window-like opening at the top of the room and the three climbed up and escaped.

Coming out of Coco’s home, Neeloo and Kukoo thanked Rizo, “We were able to escape the cage only because of your cleverness. If you hadn’t been there, we would have died.”

“I would not have been able to cut the net alone. Both of you helped me because of which we were we able to escape the cage. This is the victory of our unity and hard work,” said Rizo and smiled.

The three pledged to never trust a cat again and walked towards their homes. 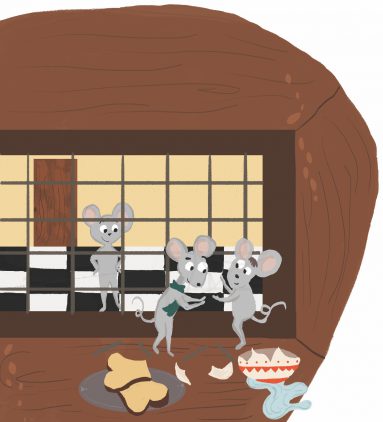 One thought on “Clever Rizo!”

Story is very good and some joke also