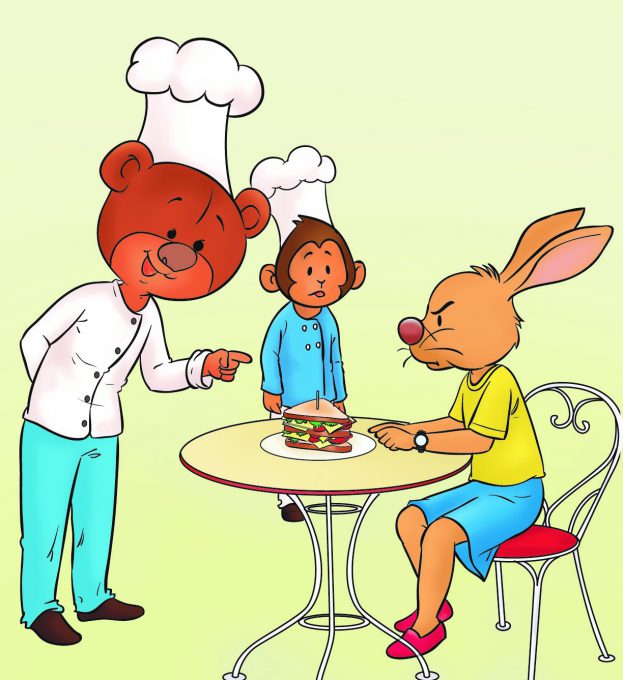 Dinku bear and Bobo monkey were sitting on a log, wondering how to earn their living.

“I can’t think of anything, Can you?” asked Dinku, glumly.

Suddenly, he snapped his fingers and excitedly cried, “I got it! Why don’t we start our eatery? We wil need to pitch in some money to buy utensils and ingredients.” 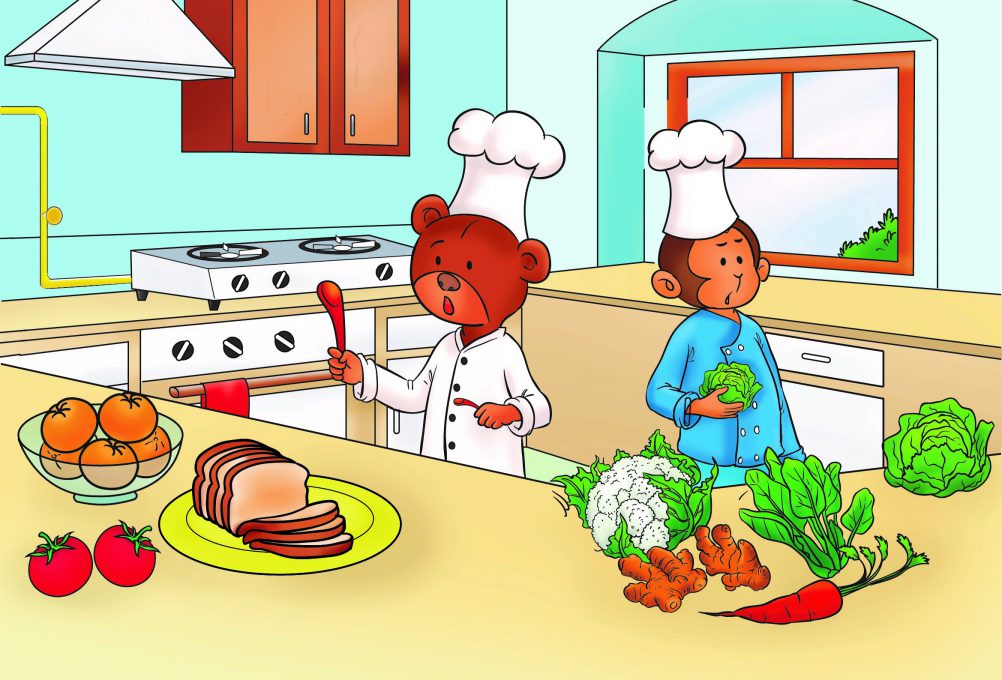 “But which one of us will cook?” asked Dinku.

“Hmm…how hard can it be! I think you should cook and I will serve food,” said Bobo, confidently.

Horrified, Dinku asked, “What do you mean? I do not know how to cook. I can’t even boil milk. It won’t work.” “So, who asked you to boil milk? Just serve it unboiled. No one would know the difference. I have my grandma’s old cookbook at home. I will get it for you. Just follow the instructions written in it, that’s all,” said Bobo.

Dinku didn’t raise any more questions as he feared Bobo’s anger. He just went along with the plan.

Soon, the duo set up a small eatery named, ‘Dinku & Bobo’s Eatery’. Tables and chairs were set up for the customers and a slightly nervous Dinku was all set in the kitchen with the cookbook and vegetables spread around him.

Dinku opened the cookbook curiously and came across the words teaspoon and tablespoon many times.

He looked at the different sizes of spoons in front of him and wondered what was the difference.

Instead of asking Bobo who himself was unaware of these things, Dinku decided to experiment.

Next, he started making chappatis and ended up making dry, burnt ones.

He was proud of at least being able to make something, even though it was inedible.

The eatery was due to open soon and Dinku had somehow managed to make simple gravies and sandwiches.

On the day of the grand opening, Bobo asked, “Ready?? The customers are beginning to arrive.”

“I am not too sure. I made a few dishes but I don’t know what it tastes like,” said Dinku, nervously.

Then Bobo picked up some sandwiches and hurried outside.

He served the sandwiches to Pinky and Chinky rabbits.

Chinky smacked her lips and said, “Hope there are some juicy grated carrots inside.”

Her smile vanished as she picked the slice of bread to see what’s inside.

Bobo took a peek and wondered what Dinku had made as none of the sandwich contents looked familiar.

“That’s our speciality,” Bobo smoothly said, with a smile.

Chinky stared suspiciously at the sandwich and took a whiff.

“It smells horrible. I don’t want it,” she said and pushed the plate away.

But Pinky wanted to taste it. She took a big bite and instantly spat it out.

“Blecchhh! It’s pathetic. You call this food?” she demanded.

At once, Bobo called Dinku out to explain to the complaining customers. Not knowing what to say, Dinku mumbled, “As he said, it is our speciality. It is very nutritious…and we…we had these…secret ingredients…ordered from far off. This will make your skin glow. Trust me.”

The word ‘glow’ caught their attention and they hesitantly ordered another sandwich and ate them. After paying the bill, as soon as they were about to leave, both of them caught their tummy and howled in pain.

“It must be those horrible sandwiches,” wailed Chinky.

“We will complain. Oooohh…,” Pinky threatened.

“The nutritious food doesn’t agree with some people and maybe you are one of those,” Bobo replied cheekily.

The rabbits, unfortunately, were in no state to argue further, so they rushed from there.

Next day, Sanjah wolf arrived and ordered a vegetable soup. When Dinku got the order, he quickly flipped through the cookbook. Unfortunately, the page with the recipe was torn. 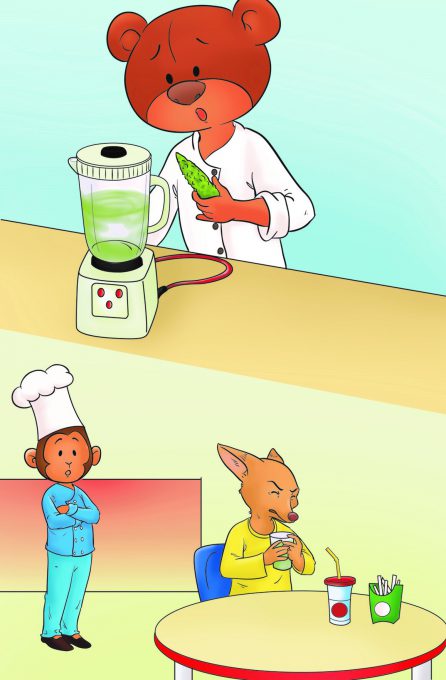 He looked blankly at the vegetables and thought, “What to do now?”

Since he couldn’t back out of it, he just decided to make a puree of vegetables and water.

He picked up some vegetables and pureed them in the mixer. Then he diluted the paste with water and seasoned it. It was ready to go!

Unfortunately, the soup was not well received by Sanjah who felt his stomach churn at the very bitter taste of it.

Similarly, things didn’t go well with the other customers too.

The gravies served were either too hot or too sour, the vegetables uncooked or burnt. Sometimes funny looking things crept up in the plates.

Everyone yelled at them and left, promising to never return.

Bobo sadly went to meet Dinku in the kitchen to inform him about the mess.

Dejected, Dinku lectured, “I warned you before that it would be a disaster.”

Bobo snapped, “Don’t blame me. It is all because of your lousy cooking.”

“Why don’t you simply admit that it is because of your lousy idea that the whole thing flopped? Now, what are we to do with all these vegetables? They will rot if kept for long,” retorted Dinku.

Bobo thought for a while and brightened up and said, “Let us offer a 50% discount. I will put it up on the board outside. Hopefully, we get some customers. In two days, we have only earned `50!”

Their discount didn’t work as the news of their bad food had spread like wildfire. Not a single customer was seen near their eatery. 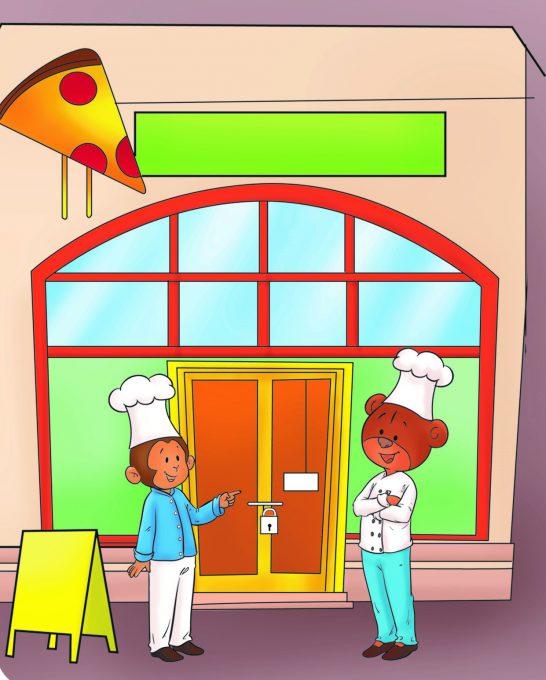