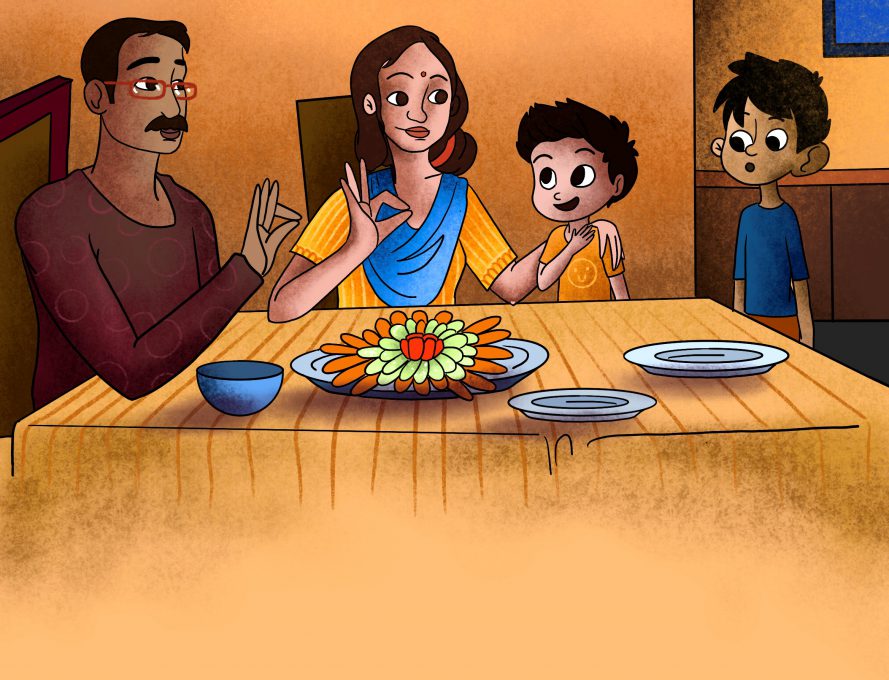 Rahul and Ryan lived with their parents in a small town. Rahul, the elder brother, studied in class 4 in a reputed school in the city. Seven-year-old Ryan studied in a special school.

Ryan could not speak or hear. But one could not make out he had any disabilities just by looking at him. His parents Tina and Pawan did not let Ryan feel any less of himself. Everyone communicated with Ryan with the help of hand gestures, a special sign language. 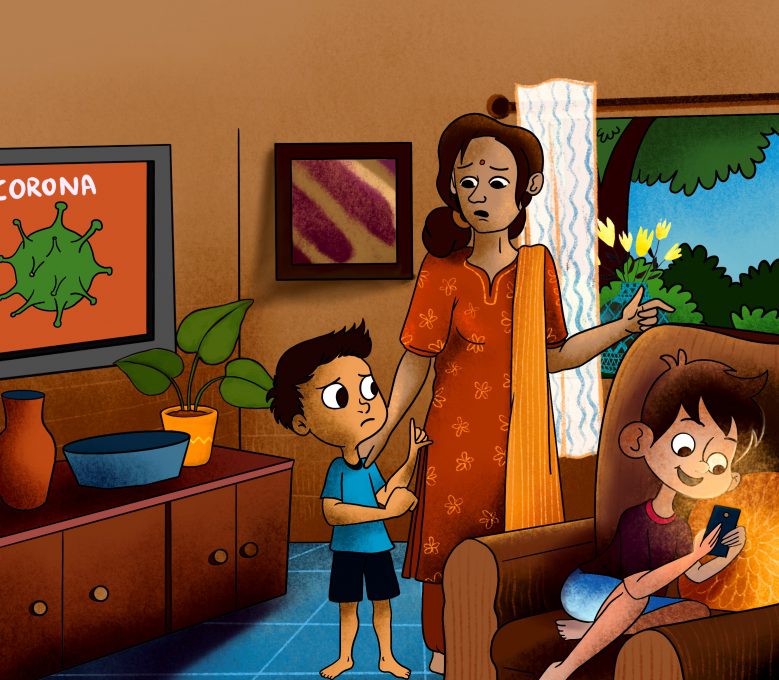 Ryan went to a school for children with special needs from an early age and started learning sign language. There he learnt to read and write using their own way.

Rahul and Ryan never skipped school and were always excited to meet their friends.

Then, suddenly, due to the coronavirus pandemic, all the schools were shut and children had to stay at home due to the lockdown and could no longer meet their friends.

Rahul spent his time playing games on his mobile phone and chatting with his friends. But Ryan was more upset for not being able to go to school.

Ma did not give him a mobile phone to play games, but would talk to him using sign language. But she realised it was getting very difficult for Ryan to stay at home all day.

But she was unable to explain in detail about the pandemic to him. She made him understand that schools were shut due to an infectious disease, and no one was allowed to step out of their homes.

The two brothers would play together for a while in the evenings. However, Rahul would soon get bored and found it hard to play with Ryan since he was unable to communicate with him like other children who could hear and talk.

Rahul spoke to his friends over the phone and often complained, “Mom, I’m getting bored at home! What can I do?”

“Do whatever you like! You anyway play games on the phone and chat with your friends all day.”

“But talking on the phone is one thing, but talking in person is the real deal!”

“Until such a time that this pandemic is over, everyone has to live this way. Why don’t you learn a new hobby during this time, like painting or craft?”

“But I want to play on the playground.” 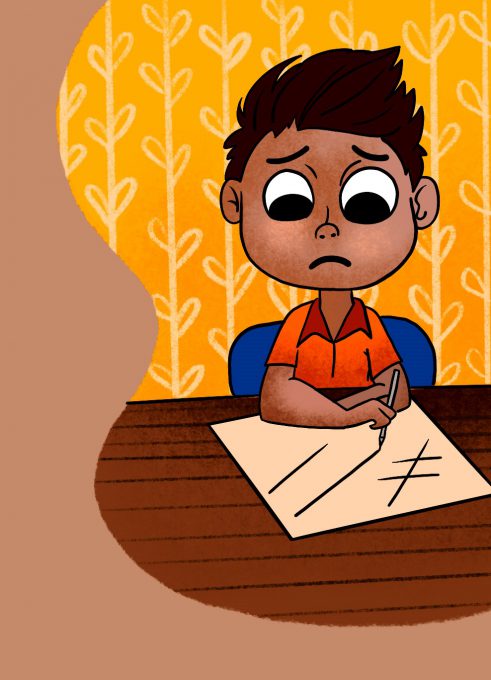 “I know! But you can play as much as you like with Ryan inside the courtyard of the house. During times like these, none of your friends can come to play with you, neither can you go out.”

Rahul loved playing cricket. But there was not enough space in their house to play cricket inside it. And Ryan was too young to play cricket with him. He could only fetch the ball when his brother hit it too hard and sent it far away.

Rahul could still manage his time, but it was getting difficult for Ryan. He tried drawing, but he would hardly draw two or three criss-cross lines and then would get bored. He could not do it for too long.

Tina tried her best to keep Ryan happy, but could not do it all the time as she also had to do the household chores.

Ryan followed his mother around all day, observing her doing the housework. In the kitchen, Tina would give him some work like peeling vegetables, or washing them. He would sometimes arrange the plates on the dining table and be overjoyed after doing it.

One day, Tina cut some cucumbers, radishes and carrots, placed them in a bowl and gave it to Ryan and signaled him to keep it on the dining table.

Ryan carried the bowl to the dining table. He looked at the salad carefully, then he picked up the pieces one by one and started arranging them on a plate. He decorated the salad on a plate beautifully.

Tina came out of the kitchen after a while and saw Ryan carefully decorating the plate with the vegetables of three different colours. She smiled and put a hand on his head affectionately and praised him with a hand gesture. Ryan too was very happy.

In the evening, Tina cut some more cucumbers, radishes, carrots and onions, and gave it to Ryan. He picked up a plate and again started decorating it on the dining table.

After some time, his father came out to the dining room after finishing his work. He saw the plate of salad and asked, “Who decorated this?”
“Ryan did it,” praised Tina.

Pawan too was pleased to see Ryan’s creativity.

“We should enrol Ryan in a cooking class, Tina. I’m sure he’ll be great at it,” said Pawan.

He kissed Ryan’s cheek affectionately and hugged him.

Tina started adding more ingredients to the salad every day. She would cut everything and give it to Ryan and he would decorate them in different styles. She did not give him a knife yet because he was still very young to cut the vegetables.

Soon other family members and relatives came to know of Ryan’s skill. Tina recorded videos of Ryan decorating the salad and sent it to them. She made a social media account for Ryan and posted videos on it. Ryan was thrilled to read other people’s comments and suggestions. He had found a way to keep himself happy during the lockdown.

Pawan and Tina encouraged Ryan with his creative endeavours. Though he could not speak, his talents definitely spoke for him. 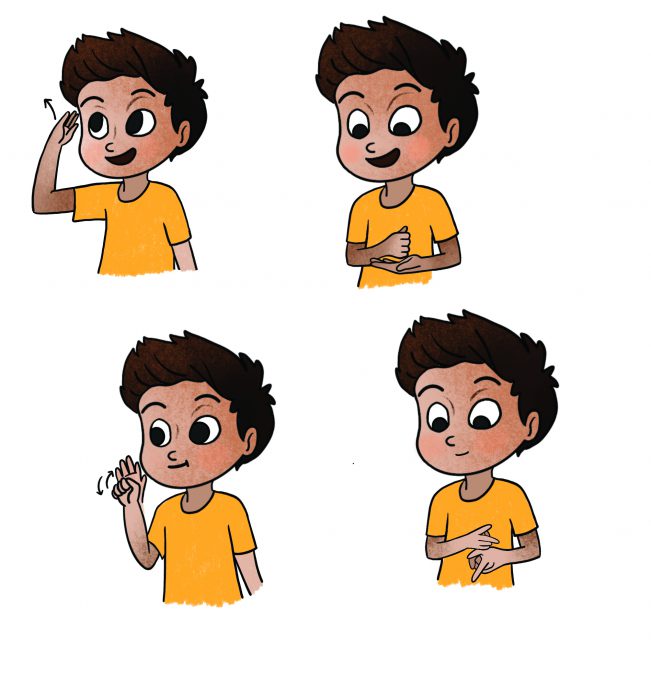