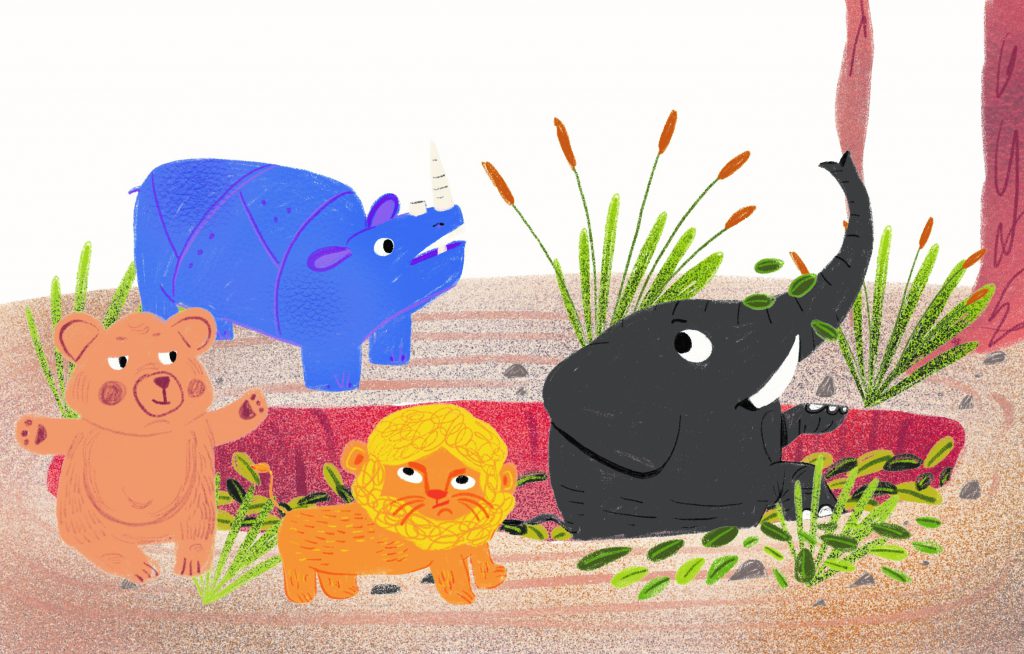 Leo lion, the king of the jungle, was sitting in his palace when Monty monkey came to him and said, “Your Highness! Jojo elephant has fallen into a pit and we are not able to bring him out!”

“Jojo knows the forest at the back of his trunk! How did he fall into a pit?” asked King Leo.

“The hunters had recently dug a new pit and covered it with grass and dry leaves. Jojo didn’t realise and fell in it,” explained Monty.

“Jojo is such a kind elephant, always helping others. We must all go and get him out at once,” roared King Leo and marched out with Monty.

A big banyan tree with its spreading branches stood at the center of the forest. The pit was near the tree and many animals stood surrounding the pit. 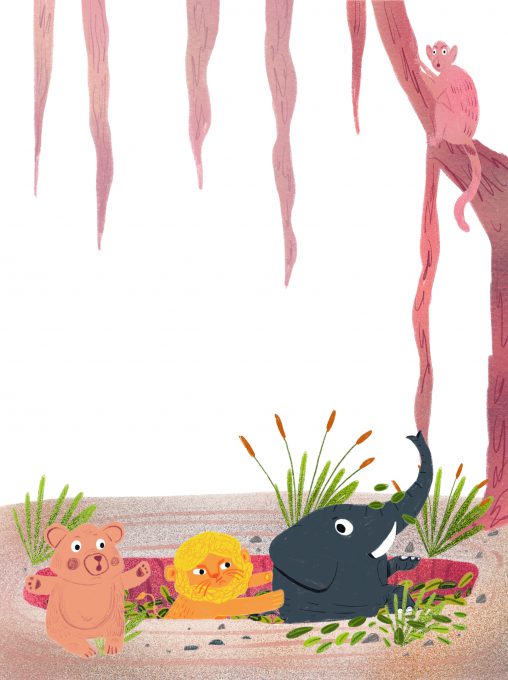 Leo saw that Jojo was injured. He shouted, “Jojo! Don’t worry! I’m here! I’ll take you out of this pit immediately.”

Before anyone realised what was happening, Leo jumped inside the pit. “Jojo, move aside. I’ll push you from below and you climb out,” he instructed.

Jojo shifted a little. Leo grabbed him by his waist and pushed him up with all his might, “Out of the pit you go.’’

Leo began huffing but was not able to move Jojo an inch out. He wiped his brow on his sleeve and huffed, “Oh! Jojo, you haven’t moved even a bit! You’re quite heavy. But don’t worry. I’ll try again. When I push, you too try jumping out. I’m sure this time I’ll be able to push you out.”

Minister Brownie bear, was observing this. When Leo pushed Jojo again, he said, “Your Highness! We have all tried. But Jojo is heavy and difficult to be pushed out. We, too, haven’t been able to move him an inch. You should come out of the pit.”

“But we all love Jojo. We can’t leave him when he’s in trouble,” said Leo.

“We have to come up with another plan. You should come out,” said Brownie.

Leo jumped out and looked at the crowd. He said, “Everyone is gathered here. But I can’t see Rancho rhinoceros.”

“Your Highness! He sleeps all day. He probably doesn’t know about Jojo, otherwise, he would’ve been here,” said Monty.

“He is strong enough to bring Jojo out of the pit. Go and call him quickly,” said Leo.

Soon Monty came back with Rancho. 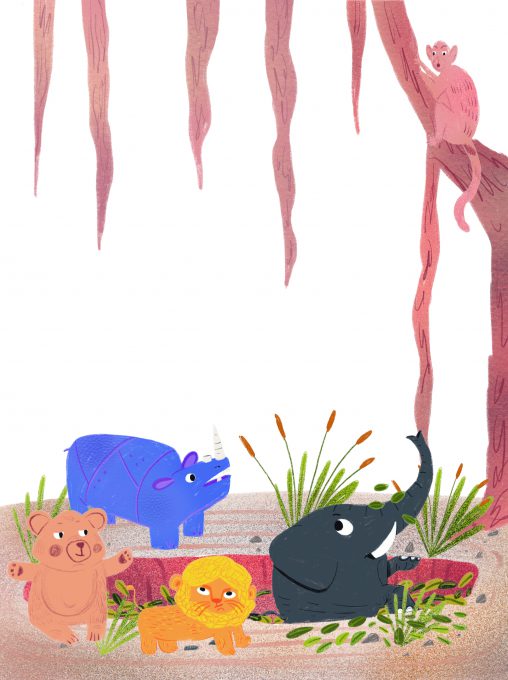 “Your Highness! Do not worry! I’ll go inside the pit and push Jojo out at once,” said Rancho as soon as he came.

Jojo heard him and screamed, “Rancho! Don’t come inside the pit!”

“Don’t worry, my friend! I’ll climb in carefully. I won’t stamp on you!” said Rancho, laughing.

“I’ll listen to you only after you’re out of the pit!” said Rancho, walking towards the pit.

“Oh, you silly animal! If you push me out, who will push you out?” said Jojo exasperatedly.

“Oh! I didn’t think of that!” said Rancho and stopped abruptly.

It was a complex problem. All the animals started thinking.

Dubdub donkey was standing among the crowd and observing everything. He said, “Rancho, don’t worry! It’ll be easy to bring you out of the pit.”

“How will that happen?” asked Rancho.

“You go in and push Jojo. Then Jojo will go inside again and push you out!” said Dubdub. 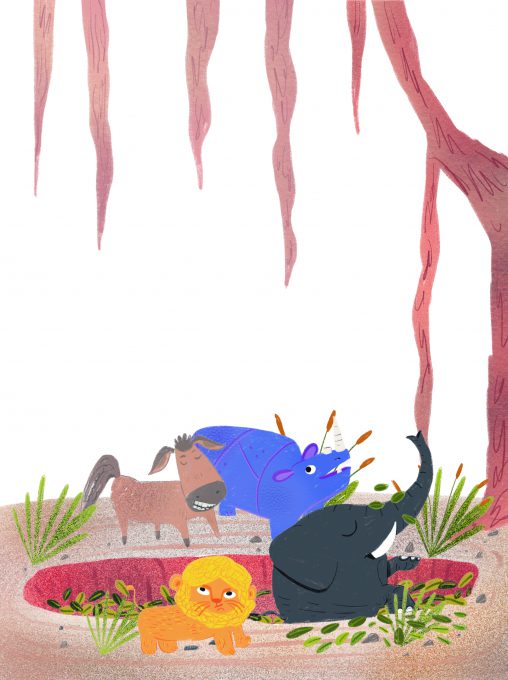 “And then I’ll enter the pit once more and push Jojo out, is it?” said Rancho raising an eye.

“You’re so smart! You understood my plan!” said Dubdub and laughed.

But Rancho cried out in anger, “Do you think we are fools like you that we’ll keep pushing each other out like in a circus?”

Dubdub realised he must have said something foolish so he kept quiet.

Leo put his paw on Rancho’s shoulder and said, “Calm down, Rancho! And think of a way to bring out Jojo.”

Neelu parrot suggested, “Your Highness! If we fill the pit with water, Jojo can swim his way out.”

The animals nodded liking the idea.

“Neelu, your idea is good but the pit can’t be filled with so much water, that a heavy animal like Jojo can swim out of it,” explained Leo.

“So then, we can fill the pit with mud. Jojo can step on the mud and come out,” said Titu rabbit.

“Jojo isn’t light-footed like you. He can’t step on top of loose mud. In fact, he’ll get further stuck in it,” said Leo.

Time passed, but no one could figure out a way to help Jojo.

Sally serpent was sitting there and seeing her Dola deer said, “Your Highness, if Sally lowers her tail inside the pit, Jojo can hold it and climb up.”

“Well, a light animal like you could climb out of the pit with the support of Sally’s tail. But if Jojo pulls it, Sally herself will fall into the pit,” said Leo. 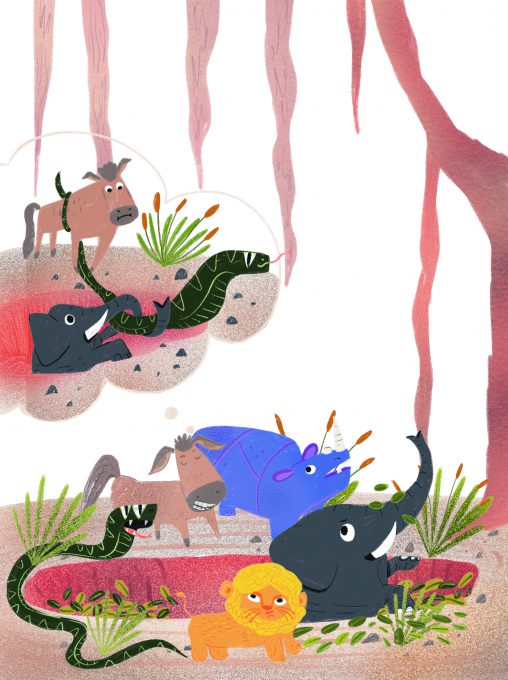 “I didn’t think of that!” said Dola, disappointedly.

Something sparked in Dubdub as he heard Dola’s idea and he raised his hand and said, “I know the way!”

“Keep quiet! We don’t have time for your nonsense!” snapped Rancho.

“Just listen to me! This time I have a great idea!” said Dubdub, excitedly.

Rancho was about to snap at him again, but Leo interrupted him and said, “Rancho! Listen to his idea first!”

Then he looked at Dubdub and said, “Tell us your idea.”

“The world knows that donkeys are very strong when it comes to carrying loads or pulling heavyweights,” said Dubdub.

“Tie Sally’s tail to my waist and let her hang with her face down into the pit.

When Jojo holds on to her, I’ll pull him out of the pit with all my strength.”

Hearing him, Sally screamed, “Hey! What are you saying? Whether Jojo comes out or not, I’m sure to be split into two pieces!”

“Don’t be so angry, Rancho,” said Leo, patting his shoulder. “Dubdub’s idea may be nonsensical, but he has shown us the way to rescue Jojo.”

Sally was scared. She started pleading, “Your Highness, please have mercy! If you listen to Dubdub, I’ll end up in two pieces!”

“Don’t worry, Sally! What I mean is that we will follow Dubdub’s plan but instead of you, we will use strong banyan tree branches to pull Jojo up,” said Leo pointing at the hanging branches of the banyan tree.

Rancho was overjoyed hearing this idea. He said, “Wow! That’s a very simple solution! Why didn’t I think of it?”

“He, he, he! We donkeys are doing all the thinking these days!” said Dubdub, baring his teeth.

Leo addressed the crowd and said, “Dubdub’s plan is great! But instead of tying the branches to Dubdub, we will tie them to Rancho’s feet. He’ll easily be able to pull Jojo up.”

“Yes, yes, Your Highness! I’d have pulled Jojo, but your plan is better,”
said Dubdub, nodding his head.

The branches of the banyan tree were cut and tied together like a rope. One end was tied to Rancho’s feet and the other end was lowered into the pit.

Jojo tugged at the rope to test its strength. It was strong enough.

Monty called out to him, “Jojo! Are you ready?”

Monty whistled signalling Rancho to walk ahead. With the support of the rope, Jojo too started coming out of the pit slowly. The other animals kept cheering for them.

Jojo was halfway out of the pit soon but his lower half was still inside the pit. He was quite heavy and could not completely pull himself out, no matter how much Rancho pulled. 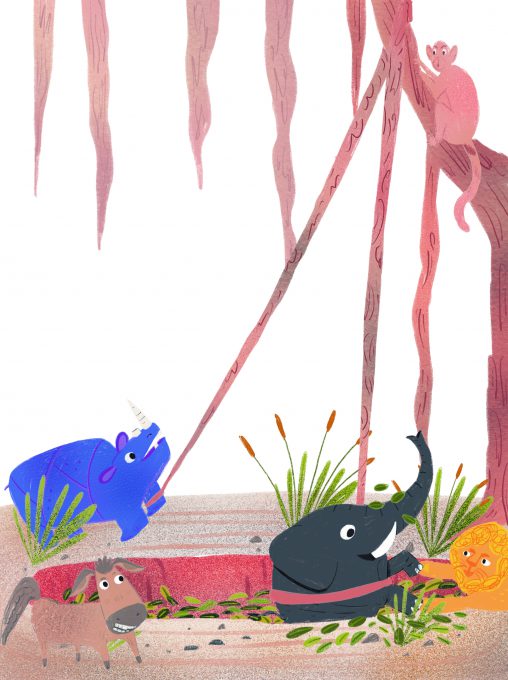 Jojo had now managed to come out almost completely when the rope started breaking. The other animals screamed in fear, but before the rope could break, Leo quickly caught hold of Jojo’s hands and pulled him out in one swift move.

“Hail our king, Leo!” cried all the animals together.

“Not me, you should praise Dubdub! It’s his plan that ultimately helped us rescue Jojo,” said Leo, smiling.

Jojo’s eyes had tears. He hugged Dubdub and said, “My dear, Dubdub! Please forgive us! We always make fun of you! But we are glad that you’re our friend.”

“Jojo and Dubdub! Best friends!” said Rancho and the other animals repeated it.

Leo had the pit filled with mud and put guards in the forest so that the hunters would not come this way again.