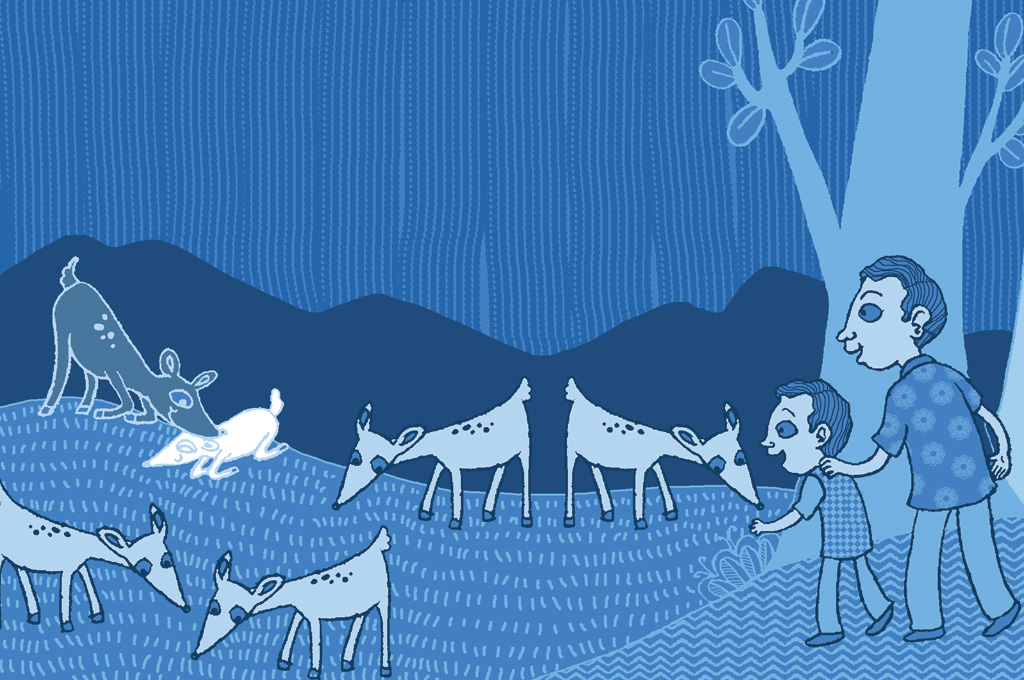 One day, a fawn was roaming around the forest with his mother and the rest of the herd. A colourful butterfly caught his attention and he began chasing it. After sometime, when he turned around, his family was nowhere in sight. They had moved on. He became scared and ran around in search of his mother. As he ran, he slipped and fell, hurting one of his legs. It was late in the evening. He did not know what to do.

The fawn noticed a light coming from far away. He started limping towards it. The light was from a house. When he reached the gate, a dog started barking. This scared the fawn, but since he could not run and was too tired, he simply sat down.

Eight-year-old Ankur came out of the house on hearing his dog bark. He saw a small animal sitting in front of the gate. But in the dark, he could not make out what it was.

“Dad, look! There is an animal in front of our house,” Ankur called out to his father.

Armed with a stick and torchlight, Ankur’s father approached the animal cautiously.

Ankur walked up to the fawn and saw him staring back at them.

“He needs help. Ankur, hold the torch while I carry him inside,” said Dad.

Ankur’s father was a forest officer and therefore, he knew how to give first aid to injured animals. He picked up the fawn and brought him into the house. With Ankur’s help, his father cleaned the fawn’s wounds and covered them with bandages.

“He must have got separated from his herd. What do we do, Dad?” asked Ankur.

“We cannot do much now as it’s already dark. The fawn can stay in our house tonight. Tomorrow morning, we’ll look for his herd and return him to his family,” said Dad.

“But Dad, can’t we keep him with us?” asked Ankur.

“Son, you know how worried your mother and I get when you don’t return from the playground on time. Similarly, just imagine how worried this fawn’s mother would be. Just like you, he needs his family, too,” said Dad.

“You are right, Dad,” said Ankur. “Can I come along with you tomorrow?”

“Of course!” replied Dad, smiling. Next morning, Ankur and his father woke up early. Dad put the fawn inside a large box.

“Dad, why did you put the fawn inside a box?” asked Ankur.

“The fawn cannot walk properly as his wounds haven’t healed yet. So, we’ll need to carry him. It is easier to carry him with this box; this way, he will also be safe from being attacked by other animals in the forest,” explained Dad.

Ankur and his father then set off into the forest with the fawn. They searched the forest floor for tracks that may have been left by the herd of deer. After walking a short distance, they found the tracks.

“Look, Ankur! These hoofprints belong to the herd of deer. It must be around here somewhere. Walk quietly and keep an eye out for the herd,” said Dad.

Ankur and his father followed the hoofprints. Soon, they found the herd grazing in a small clearing. They stopped a short distance from the herd and took the fawn out of the box. They nudged him in the herd’s direction. As soon as the fawn saw his family, he cried loudly and limped towards them. His mother ran towards him and licked him all over. Ankur and his father were elated to see the fawn reunited with his mother.