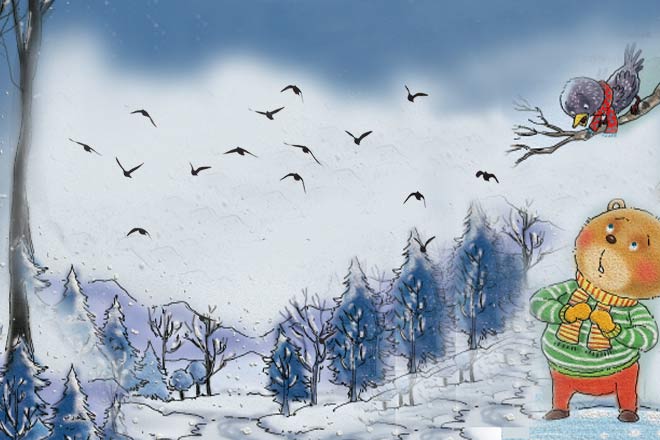 The month of December was on and it was very cold in the forest. The animals and birds were worried. Winter seemed to be very severe this year. There were only a few days left for Christmas and preparations had to begin.

Tilu, the starling sitting on the tree asked, “Brother Goru, how is the preparation for the Christmas coming along?”

“It has not started as yet. Owing to the severe cold nothing could be arranged,” said Goru, the bear.

“It is always cold during Christmas, why are we afraid of it? We should start preparing for it,” said Tilu.

“It’s true. Christmas is a winter festival, then why are we afraid of the cold? Come let us start its preparation from today. Spread the news to everyone in the forest,” said Goru.

“Good, I will inform everyone,” said Tilu and flew off. She conveyed Goru’s message to most of the animals. The mere mention of Christmas spread a wave of happiness.

Harshilvan was known for it’s unique Christmas celebrations. Everyone helped and the idea was always new. The food and drinks were of different varieties and that is why Goru had informed everyone in advance. The plan was discussed in everyone’s house in the forest.

Tina, the doe was expert in making cakes, while Peelu, the peacock was good in making a Christmas tree. Every year they would decorate the tree in a new way and provide delicious cakes to eat. Some would sing and others dance.

As the festival approached the winter became more severe. Everyone was finding it difficult to work and was worried how they would celebrate Christmas this year.

Peelu made all arrangements to decorate the Christmas tree. He also chose the tree. It had to be fixed in the ground in front of the house. Everyone’s eyes were focused on the season. It was becoming colder.

Peelu and Goru fixed the Christmas tree two days before the festival. It was snowing on Christmas morning. No one went out in the snow. The birds sought shelter in their nests.

A thick blanket of snow was spread out everywhere. The plants and trees were covered with snow. Goru did not like to sit at home on a festival. He came out of his house as he could not stay in any longer and called out to all his friends. They wished each other a Merry Christmas. “How will we celebrate Christmas this year?” Teju, the monkey asked. “The Christmas tree is completely covered with snow,” said Tinku, the jackal. “What difference does it make? Are you all ready to celebrate Christmas?” Goru asked.

“Yes! All of us are ready.” Everyone replied in unison.

“You know we celebrate Christmas in a different way every year. This time the snow has given us this opportunity to do something unique,” said

“We have not understood what you said? they asked.”

“Together we will make a Christmas tree of snow,” explained Goru.

“That is a good idea,” said Tinku.

“But how will a tree be made out of snow? We can gather snow and make a mound but not a tree,” said Teju. “You make a mound and we will change it into a tree,” Goru said. The others could not understand anything that has been told. The branch that had been fixed for the Christmas tree two days ago was now completely covered with snow, and it was still snowing. Everyone helped in gathering the snow and heaped it up to form a mound.

“Make it as high as possible,” said Goru.

All of them made it as high as they could. Meanwhile, all the animals came there. On the instructions of Goru, Teju brought Honey, the horse. Goru explained something which made Teju happy. He climbed up a branch and shaped the mound into a Christmas tree. He cut the pile of snow and gave it the shape of a tree.

“Wow! This is a beautiful snow tree,” exclaimed Chutki, the doe.

“But how will we decorate it?” asked Tinku.

“It can be decorated with plastic flowers and toys,” said Goru.

“His feathers will get wet”.

“Their feathers get wet in the rain, not in snow,” explained Goru. Besides their feathers are so slippery that neither snow nor rain can stay on them…”

Peelu joined them within a few moments. Following his example, many birds came out of their nests. All of them decorated the tree with great enthusiasm. The bright white Christmas tree looked very beautiful.

The animals of the forest assembled to celebrate Christmas even in the snow. Everyone was happy. They had not imagined celebrating Christmas in this manner. By then Tina had also come there with the cake.

“Tina, what have you made this time?”

“Look at it!” said Tina and opened the box. It was filled with cakes in the form of small round white balls. Everyone enjoyed eating them. Then all of them made snowballs and hit each other with them. They had never enjoyed so much in the snow before. Everyone celebrated Christmas together, sang songs and danced. No one felt the cold, but they were filled with the warmth of the festivities. Christmas was being celebrated by all.