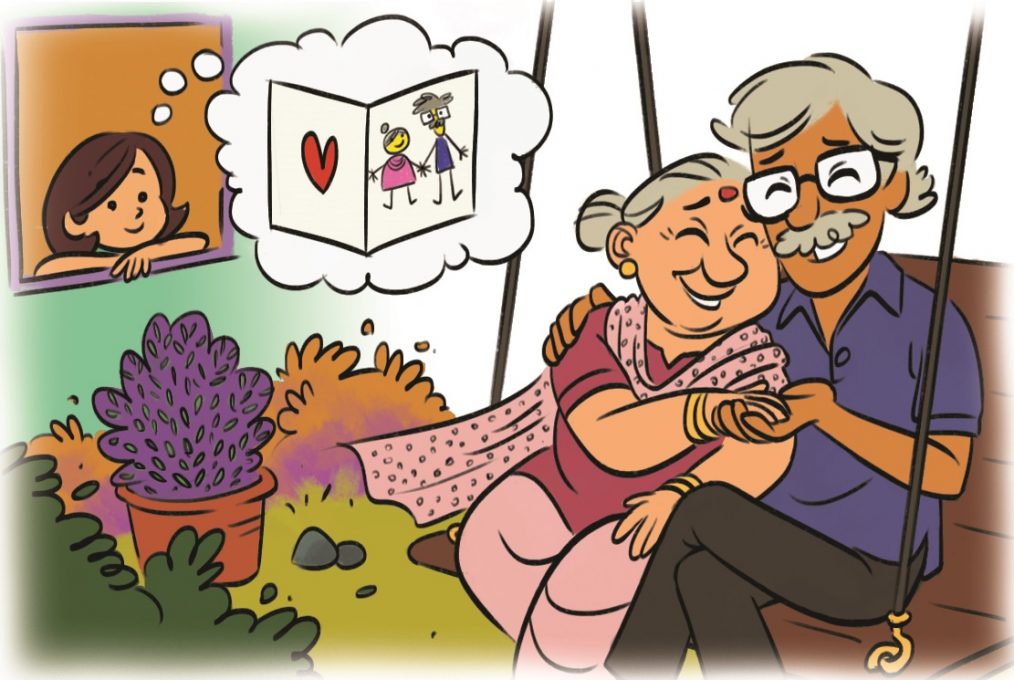 Sudha’s grandfather, whom she fondly called Dada, had recently retired from work. Being an engineer, he had worked with an automobile company for the last 35 years. His colleagues held a grand ceremony to felicitate Dada and bid him farewell.

Mummy told Sudha that retiring from work meant not going to office any more. It was like taking a long vacation from work. But Sudha was confused. “Sure, Dada doesn’t go to office every day now; but he still seems to be busy the whole day!” When she asked Dada about this, he smiled and explained, “Retiring means ‘re-tyreing’ our worn-out wheels and starting a new journey in our life.”

Dada attended yoga classes every morning, and his instructor Ms. Dina said he was one of her best students!

Although Dada was 65, he did not like being called a “senior citizen.”  Dada was an expert at repairing household gadgets. In the last one month, he had repaired Papa’s phone charger, Mummy’s hairdryer, Didi’s keyboard, Deepa aunty’s electric kettle, Kaalu’s pocket radio, Ramesh uncle’s electric shaver—phew! That was a long list! Dadi joked that Dada should set up a repair shop of his own. She also said that she would never retire. Homemakers had to remain homemakers all their life, she said.

“That is not fair! When I grow up, I will take Dadi for a long vacation at the beach,” Sudha decided. After all, Dadi did love the seaside. And Sudha loved Dadi’s cooking. North Indian, South Indian, Chinese, Thai, Italian, Mexican—whatever the cuisine, Dadi could whip up the tastiest fare. Sudha’s friends at school were always eager to peep into her lunchbox to see what mouth-watering snack awaited their tummies!

Of course, Dada and Dadi had their share of fights too. But they also patched up almost immediately after it.

“You should never carry your fights to the bed or the pillow will swallow your head!” Dadi would joke.

So after their fights, Dada and Dadi would sit hand in hand on the swing in the veranda and talk about the fun they had in their youth. Today, as Sudha crouched under the window, trying to eavesdrop on her grandparents, she remembered that she had to make a Valentine’s Day card as part of her class assignment. Skipping back to her room, she saw Mummy and Papa huddled on the couch, sharing a laugh over a newspaper article. Through the window, she spotted Didi cuddling and feeding biscuits to Rancho, the neighbourhood mutt, whose tail wagged vigorously in excitement. Mali kaka was busy talking to his plants as he watered and weeded them with great care.

Sudha smiled, knowing exactly what she wanted to draw on her card. “When you are with someone you love, every day is Valentine’s Day!” she thought. As she sat down to work on her masterpiece, Rani, the house cat gave out a soft purr, wrapped herself around Sudha’s leg and drifted off to sleep.