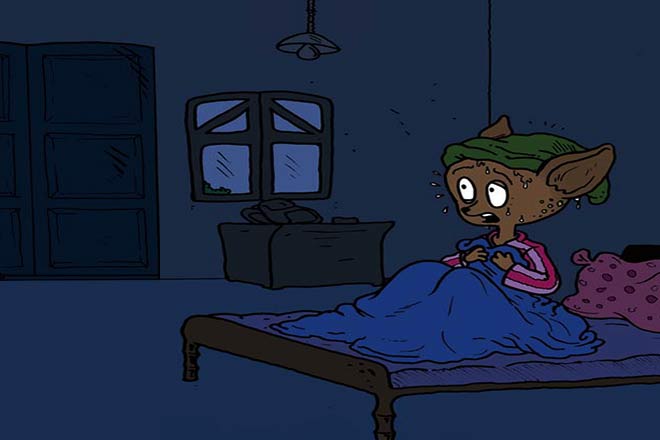 When Danny, the fawn opened his eyes in the middle of the night, his room was completely dark. He became scared and called out to his mother!

“Mom! Where are you? Why have the lights gone out? My room is very dark!” Danny screamed from his room.

“Don’t be scared, Danny. I am right here,” said his mother Dina, the deer, rushing into Danny’s room. “There is a power cut. I just called the electricity office and they informed me that it will be back within an hour,” she explained, as she patted his back to ease his fear.

“I will sleep beside you till the power is back. You know I am scared of the dark,” said Danny, holding on to his mother tight.

That night, Danny slept with his mother. He still could not sleep properly, because of which Danny was tired the next day and dozed off in class.

“Danny! Why are you sleeping in class?” his teacher Jimmy, the monkey scolded him.

Danny tried to stay awake but he dozed off again. His classmates laughed at him. During recess, Danny’s friend Marty, the mongoose said to him, “You look very tired today. Didn’t you sleep last night?”

“No, I did not. There was a power cut at home and my room became completely dark. So, I was scared and couldn’t sleep at all last night,” explained Danny

“So what if it was dark? You were in your house, not in the middle of the jungle!” said Marty.

“My room was pitch-black and I was all alone. What if someone had come into the house?” said Danny.

“If the doors and windows are locked, no one can enter your house, said Marty.

“What about ghosts? They don’t need doors and windows to enter. They can walk through walls!” said Danny, shuddering at the thought. “When I sleep, I cover myself fully with the blanket so that the ghosts can’t see me.”

Marty burst out laughing. “There is no such thing as a ghost! If you can overcome your fear of the dark, then you wouldn’t have an irrational fear of ghosts,” said Marty.

“How do I overcome my fear?” asked Danny, hoping for a solution. “I try sleeping with the lights on, but that doesn’t seem to help.”

“You have to face your fear. Instead of keeping the lights on at night, get used to the darkness a few minutes at a time. Switch off the lights for a minute, then for five minutes and then gradually keep increasing the time. Soon, you will become comfortable not having the lights on through the night,” suggested Marty.

“But what if I see a ghost?” asked Danny.

“Keep a flashlight by your side. In case you think you see a ghost, flash the light at it and it will go away. Ghosts are afraid of brave kids,” said Marty.

“Really? I didn’t know that,” said Danny excitedly. “I am going to try your suggestion tonight and see how it works,” he said cheerfully.

That night, Danny went to bed with a flashlight by his side. To his mother’s surprise, he even switched off all lights in his room. As soon as it was dark, Danny held on to his flashlight tight and lay still. After a few minutes, Danny was slowly getting used to the darkness. It did not seem so scary after all.

Suddenly, he felt a figure moving towards his bed. Danny wanted to scream but he remembered what Marty told him: “Ghosts are afraid of brave kids.” So, he closed his eyes and lay still. After a minute, he opened his eyes to find the figure missing. “Maybe it is hiding under the bed. Let me flash the light at it and chase it away,” thought Danny. He switched on the light and looked under his bed. To his relief, there was nothing.

Danny felt triumphant. “Hurray! There is no ghost in the room. Now that I have become brave, the ghost must have become afraid of me and run away!” he said to himself.

Danny switched off the flashlight and went back to bed. He slept peacefully that night.

The next day, at school, Danny thanked Marty for helping him overcome his fear of the dark. the dark. “I am glad I could help you,” said Marty. “But now, you don’t have an excuse to fall asleep in class,” he joked. Danny laughed with him.