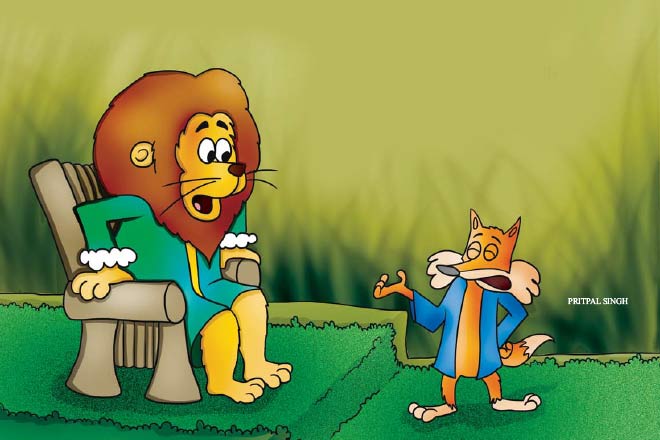 There was no electricity in Satpudavan. Darkness gripped the whole forest as soon as the sun went down. There was nothing but pitch blackness after sunset. The animals that lived in the forest faced a lot of trouble during the nights without any light.

One day, Makalu Fox went up to King Sher Singh of Satpudavan. “Maharaj,” he said. “I saw a huge colony of fireflies near a swamp outside the forest last night. They made such a bright sight. I think these fireflies have a lot of electricity. If they come to our forest and give us their electricity, we won’t have any trouble seeing at nights.”

King Sher Singh sent his messengers to call the fireflies to his palace. The fireflies were humble and came as soon as they received the message.

“Please give us whatever electricity you have,” King Sher Singh said to the fireflies. “We will pay you whatever you ask for. We want to utilize your electricity to light up our forest at nights.”

“I am sorry, Maharaj. But this cannot be done. We have inherited the light. It is part of our bodies. We cannot just give it away,” Jagmag Firefly said. He was the leader of the colony of fireflies.

“How dare you decline our King’s request? Makalu Fox said in a threatening voice. “Give us your electricity or you will be punished!” “Please don’t get angry,” Jagmag Firefly pleaded. “You must understand. Even if we give you the electricity we have within us, it won’t be of any use to you. It won’t work without us. We will perish if we give it to you.”

Minister Gajju Elephant heard the commotion and came to see what was happening.

He greeted the King and then said, “Maharaj, the fireflies are right. It is true. The light fireflies have is made by a biological action. They can’t give it away.”

“Is that so? King Sher Singh said. “I don’t understand. Please tell me more.”

“Maharaj, the fireflies belong to the arthropods community,” Gajju Elephant explained. “I read about them in an encyclopedia. They have a special element coming out of their bodies which can be seen at night. It is because of this element that they appear to flashlight at night.”

“That is why I have called them here. I want them to illuminate our forest with their light,” King Sher Singh said. “They must share their element with us.”

“Maharaj, the fireflies can’t give you their element even if they wanted to,” Gajju Elephant explained patiently. “The fireflies’ light is known as ‘bioluminescence’. It means ‘organism light’ which is emitted because of a special kind of chemical product found in the fireflies’ bodies.”

“I will tell you more about this, Maharaj,” the leader of the fireflies said respectfully.

“That’s a good idea, Jagmag,” Gajju Elephant said. “It will be best if you explain.”

“The chemical element in our bodies is called ‘Luciferin’ It is present in our cells. We can use it as many times as we want. It doesn’t get over.”

“So, the Luciferin stays constant and doesn’t get over?” Sher Singh asked, looking very surprised.

“That’s correct, Maharaj! The Luciferin supply in our cells remains even after we make light.” Jagmag Firefly explained.

“Okay, but how does the light go on and off?” King Sher Singh said.

“Maharaj, this entire process is governed by our nervous system. Luciferin is present in the inner surface of our respiratory tracts.” Jagmag Firefly continued. “When we breathe in and out, our nerves let the air go out with gaps. And so, it seems like our light is flashing or going on and off.”

“Maharaj, please understand our problem. If we give this chemical substance of ours to you, it will be of no use. We will perish instead,” Jagmag Firefly folded his hands and said.

“I won’t let you perish, Jagmag,” King Sher Singh said kindly. “But can you and your friends do me a favour?”

“Of course, Maharaj!” Jagmag said. “Please tell us what we can do for you?”

“Spread out in our forest instead of staying together in one place during the nights. The whole forest will be lit up that way.” King Sher Singh requested.

“Yes Maharaj, we will do that,” all the fireflies said together.

From that day onwards, the fireflies scattered themselves throughout the forest at nights. The whole forest was illuminated with little sparks of light.

All the other animals thanked the fireflies and rejoiced.