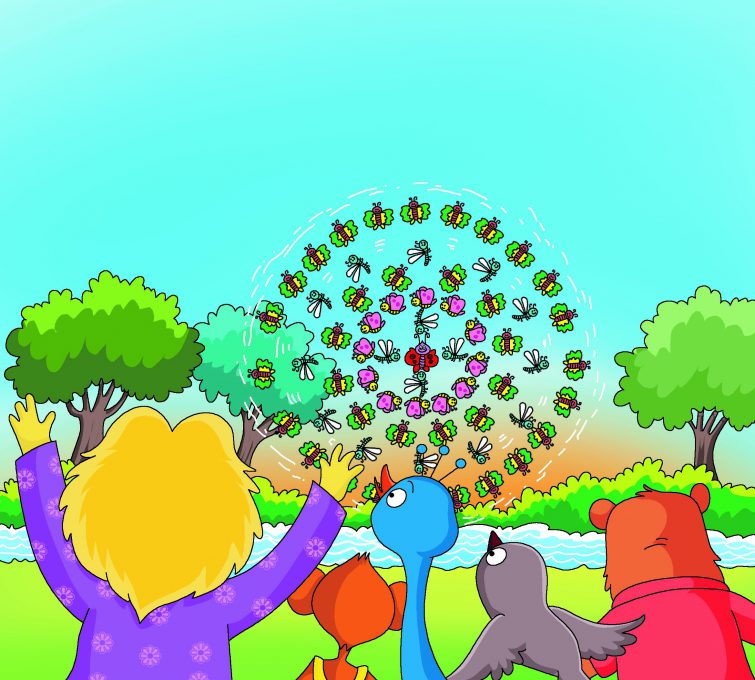 All the animals and birds in Champakvan forest lived happily and peacefully under the rule of their king, lion Shersingh.

Every year, Shersingh organized the Champakvan Festival during Diwali week.

The festival included competitions such as rangoli making, floral and light decorations, games and drama. There would be a delicious feast for all the inhabitants of Champakvan. They would also visit their family and friends with gifts.

The week-long festival would end with a prize distribution ceremony for winners of all the competitions at a grand finale of the celebrations.

This year too, they had a great time during the festival! And finally, the much-awaited grand finale was being organized at the bank of the forest river.

It was a pleasant afternoon. All the inhabitants were gathered at the river bank. It had just stopped drizzling. Peacocks gathered there were dancing in joy. Nandu mynah enthralled the gathering with her melodious songs. Naughty monkeys played and ran about with each other.

When king Shersingh arrived at the bank with his advisor Jumpy monkey, everybody greeted him. After casually interacting with some animals, he sat on a rock under the banyan tree.

“We have been celebrating our Annual Champakvan Festival every Diwali for many years. Like every year, we organized competitions in various categories.” After a pause, he continued, “I hope everyone enjoyed all the events like dance, music, drama, sports and the eating competitions, as much as I did! I personally judged many programmes and shows performed in the last few days. But before I reveal the names of the winners, I have a big surprise for you – an event neither seen nor imagined before! Please put your hands together for a very special performance by our dearest, Chameli butterfly and her team!”

Chameli, the pretty butterfly, came fluttering in front of them with hundreds of butterflies, dragonflies and moths Flapping around, they synchronized their movements to form beautiful patterns above the river in the air! Then, they queued up separately based on their colours.

The moths made red, blue, orange, yellow, white, brown, purple lines. Slowly, they started coming together. Chameli remained at the center fluttering her wings first. The line of red moths circled her. The blue, orange, yellow, white, brown and purple team-members of Chameli followed, and made different coloured patterns circling one after another. Finally, in front of the inhabitants was a big rangoli in the air.

Now, the colourful rangoli flew about in different angles in perfect synchronized steps. Nandu mynah enhanced their movement with her songs. Nobody had seen a flying rangoli before!

Chameli and her team enthralled the audience till the sunset, and as the evening set in, they slowly started disappearing. To everyone’s surprise though, after a few minutes, the butterflies and dragonflies came before them with thousands of fireflies joining them, forming shapes of diyas, depicting an illuminated world!

“Wonderful!” exclaimed King Shersingh. Everyone gave a huge round of applause for Chameli and her team.

In a few minutes, as planned by Jumpy monkey, the rabbits and deers of the forest lit diyas all around. From the river, Indu swan came out looking beautiful. “Diwali is the festival of lights- victory of good over evil and knowledge over ignorance,” she said, addressing everyone.

Jumbo elephant distributed sweets to all. Baddy fox and team opened the non-polluting fireworks. The king had banned the use of noisy crackers to avoid sound pollution. However, crackers that lit up with minimal noise were permitted.

It was now time for the feast. All the animals had carried something from their homes. Nayana squirell and Chandni parrot arranged the food for everyone.

After the celebrations were over, the Shersingh appreciated Chameli and team for their magnificent performance and presented them a beautiful honey pot decorated with jasmine flowers. He then distributed prizes to the winners of Diwali competitions. Nobody could control their laugh when Jumbo elephant was declared the Best Eater! Each participant got a bouquet as a token of appreciation by the king. The king then, thanked the organizers and the audience for making the celebration a great success! 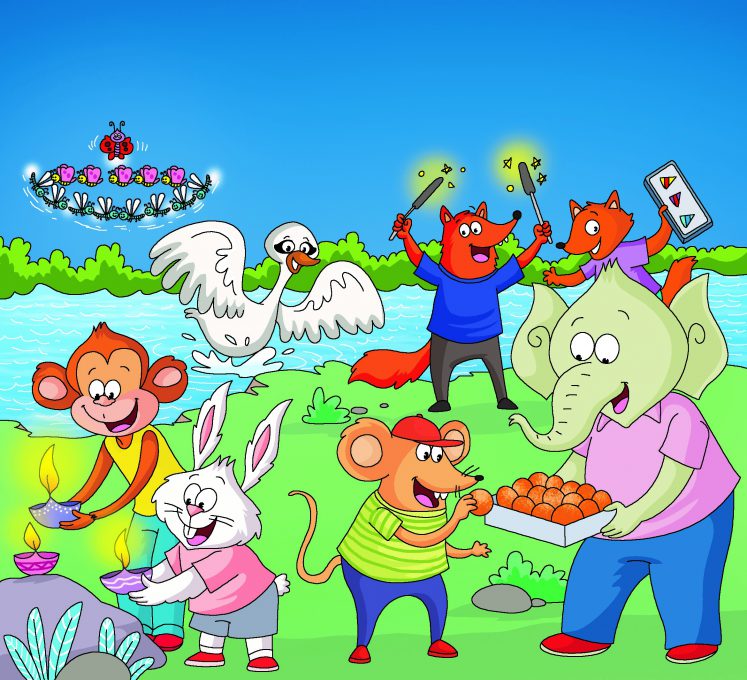 “Happy Diwali!” cheered everyone, as the night fell

This is most special story I have ever read !!!!