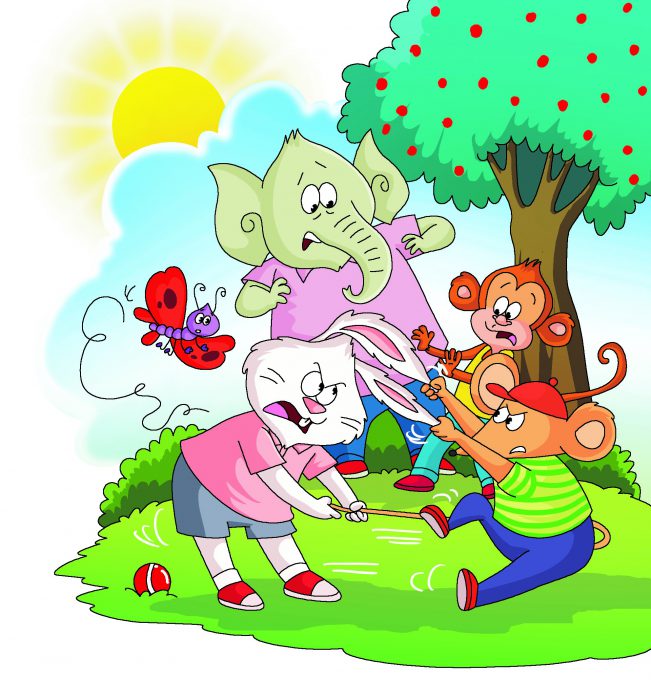 Cheeku rabbit and Meeku mouse were playing cricket with their friends on the playground.

Meeku wasn’t paying attention to the game because he was busy talking to Jumpy monkey.

“Meeku, catch! It’s your turn to throw the ball,” said Cheeku, throwing the ball to him. The ball hit Meeku’s head as he didn’t hear Cheeku.

“Ouch! Cheeku, why did you hit me?” asked Meeku, angrily.

“Meeku, I didn’t mean to hurt you. I threw the ball for you to catch it. You weren’t paying attention so it’s not my fault,” said Cheeku.

“Who throws like this? Couldn’t you wait for me to look at you? You knew I was busy talking and still, you threw the ball at me!” shouted Meeku.

“Are you here to play or to talk?” asked Cheeku and they started arguing.

Their friends somehow pulled them apart and stopped the fight. Angry, the two of them went home.

They did not talk to each other for several days. One evening, Cheeku went to the playground and saw Meeku sitting alone.

Cheeku picked a corner on the playground and sat there without talking to Meeku. Their other friends hadn’t come.

They both waited for some time for others to show up but no one did.

Bored, Meeku decided to leave the ground and go home. Just then, Cheeku asked, “Meeku, if you want, we can play.”

“You want to play with me?” Meeku replied, shocked.

“Why is that shocking? We used to play together before,” replied Cheeku.

“I thought you were angry with me because we fought,” said Meeku.

“Meeku, you were angry because I hit you with the ball,” said Cheeku.

“No. I know you didn’t hit me purposely and it was my fault too. I should have concentrated on the game. I was hurt that’s why I yelled at you. I am sorry,” apologised Meeku.

“Ah! It’s alright! How foolish of us to not talk to each other for so many days,” said Cheeku.

“Let’s forget what happened in the past! We are friends again and that’s what matters,” said Meeku, smiling.

“Yes. We should try not to fight and if we do, then we should forgive each other,” said Cheeku.

And they both started playing together again.

Soon, their friends came and saw the two playing, just like before. “We purposely didn’t show up as we wanted you two to forgive each other today as it is World Forgiveness Day. Your friendship is so strong. You should not let any small fight break it,” said Jumbo elephant.

Saying this, Jumbo lifted Cheeku and Meeku with his trunk and everyone cheered for them!