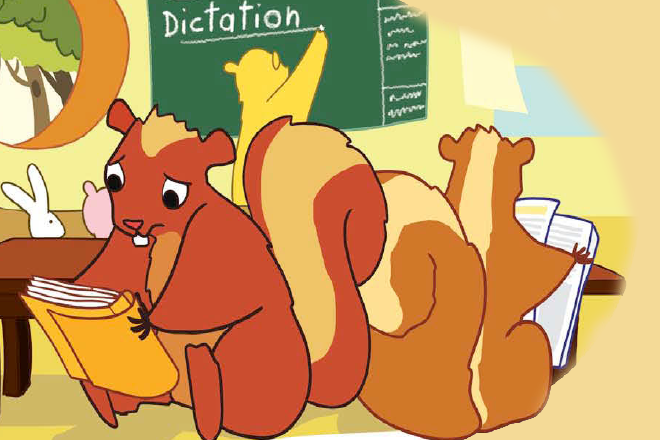 Santu and Mantu squirrels were close friends. They used to play together every evening in the lawn. They also studied in the same school and same class. They went to school together in the bus chatting all the way long.

English class was going on and Ms. Lucy Leopard, their English teacher suddenly announced that there was going to be a dictation in that lesson. She gave them ten minutes to study.

Santu and Mantu realized that while Santu had brought his English textbook, Mantu only had the notebook where they would do their schoolwork.

“Let me study from the textbook, Santu,” said Mantu.

After 10 minutes, the teacher started dictating the words. She said “Necessary.”

Santu wrote “Nursery” and Mantu wrote it correctly. Santu looked over to Mantu, and saw him writing the answers down without with stopping, while Santu was having trouble with every word.

Soon, the teacher corrected all the papers and Santu had got one wrong answer. But, Mantu got all correct.

Santu had to write the word “Necessary” 100 times. Santu’s hands were aching due to the imposition. He told Mantu, “It is all because of you. I am not going to talk to you. You wrote all the correct answers without studying.” Santu tried to say something but Mantu left the class angrily.

Santu was feeling hungry. He opened the fridge. All the nuts were over and only butter and jam were there. “I can’t wait till mom comes. I will go and buy some bread from the bakery.”

Mantu was also feeling hungry. He opened the fridge. He saw some bread slices but there was no butter or jam. He also went to buy some butter and jam. Both of them met in the lift but they turned their faces in the opposite sides. When the lift opened, they went to Sams Bakery. But, Uncle Sam was closing the bakery.

Santu said, “Please uncle, I just want bread. Nothing else.

“Mantu said, “ Uncle, just a bottle of jam for me.” But, Uncle said, “I am sorry boys. My stock is over. I have just got some broken biscuit pieces. Come tomorrow morning, you will have whatever you want.” Both Santu and Mantu were disappointed. They went to Linda’s Grocery stores. Linda was sitting on a chair and her face was very sad. Santu asked her, “What happened Madam Linda? Why do you look so sad ? I want some bread. “Mantu said,” And Madam Linda, butter or jam for myself. I have bread at home.”

Linda said in a feeble voice, “Santu and Mantu. I cannot help you because this afternoon, when I had gone for lunch, somebody looted my shop. I have made a police complaint dear. I am sorry.”

Santu and Bantu finally went to Robin’s “Cakes and Bakes” shop. Robin looked so furious and was shouting loudly. Both Santu and Mantu went near him. They were scared to see him in a fit of anger. So, they asked slowly, “Robin uncle, can we get some bread and butter?” Robin screamed at them, “Hey boys, leave this place at once. I am already troubled by these wicked and cunning rats, who eat away all my pastries and eatables. I am myself so confused thinking about how to get rid of this rat menace. Leave me alone.”

Santu and Mantu started walking back to their homes. Their tummies were roaring with hunger.

Suddenly, they heard somebody giggling from behind. It was Patty Pig. Santu looked at her and said,”Why are laughing, you silly Patty? I am already very hungry and do not tease me by laughing like this.” Mantu also said, “Patty, why are you following us? I saw you at Sam’s Bakery also. Don’t you have any useful job to do?”. Patty said, “Okay, I thought I will help both of you by giving an idea. But, if you are calling me silly, then I will have to go.”

Mantu looked at Santu and Santu at Mantu. Then, they shook hands with each other. They told Patty pig, “Hey Patty, thanks for the idea and also for making us friends once again. “Patty pig said, “Okay, but I do not give ideas free of cost. I charge one bunch of lettuce leaves for my wonderful ideas. Bring them when you come to school tomorrow. Bye!” Both Santu and Bantu had Bread with butter and strawberry jam. “Friendship is Necessary. I won’t make this spelling mistake again” said Santu and Mantu laughed loudly.