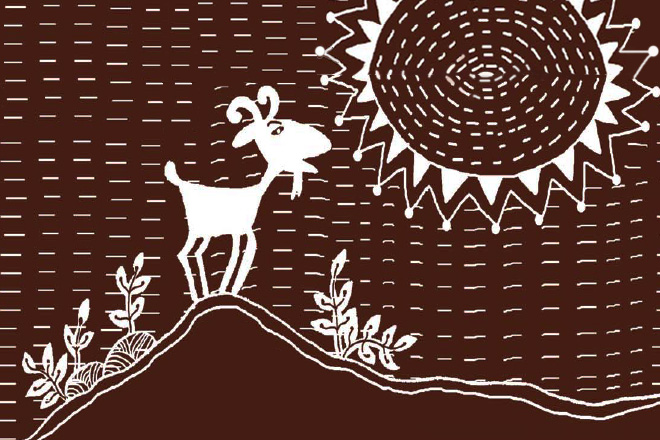 She gave birth again, this time to two cute kids, but her past experience made her extremely worried.

She was apprehensive about the jackal killing her kids. Which mother could bear that?

“Think of something soon so that the jackal can’t take away our kids,” she expressed her fear to the billy-goat. “I won’t even go for grazing. I’ll just stay with the kids and protect them.”

“We can’t live in fear all the time. I have thought of a plan,” the billy-goat assured Manmanjari. “I’ll climb the hill and watch. As soon as I see the jackal coming, I’ll call out to you ‘Manmanjari, why are the kids crying?’ Then you pinch the kids so that they cry even harder.

“Then you say ‘What should I do? The kids are demanding a fresh, jackal liver to eat. There is a stale liver available in the house, but from where should I get a fresh one at this hour?’ Then I’ll say ‘Be quiet. Don’t make a noise. A jackal is coming here. I’ll get his liver for the kids to eat.”

After explaining the entire plan to Manmanjari, the billy-goat went on top of the hill. When he saw the jackal, he shouted loudly, “Manmanjari, Manmanjari, what’s the matter? Why are our kids crying?”

Manmanjari pinched the kids and said as already planned. The billy-goat shouted again, “Ask them to stop crying. I’ll go and get the liver of a jackal for them to eat.” Upon hearing his words, the jackal got so terrified that he didn’t even wait for a second. He ran as fast as he could with all his might.

While the jackal was running, he met a gibbon on the way. “Brother Jackal, what happened?” The gibbon asked. “Why are you running like this?” The jackal narrated the entire incident to him.

The gibbon burst out laughing, “Brother Jackal, you must be out of your mind! Is it possible for a goat to kill a jackal?”

“Dear friend, I heard quite distinctly that the billy-goat told his wife that he was going to get a jackal’s liver for their kids to eat,” the jackal replied petulantly.

“If that is so, then I would like to see that billy-goat,” the gibbon declared. “You tie our tails together, and I’ll sit on your back and come with you.”

They knotted their tails to each other, and the Jackal set about carrying the gibbon on his back. When the billy-goat saw them coming from the hilltop, he pondered at the new development and came up with a solution to the problem. He called out loud to Manmanjari, “Manmanjari, please pacify the kids somehow. My friend, the gibbon, is bringing the jackal here itself by tying their tails together. Do not worry at all. I’ll get the jackals liver in just a short while.”

The jackal got alarmed upon hearing the billy, goat’s words. The billy-goat again called out, “Hey Gibbon! You are so useless! You had told me that you would get many jackals, but what is this? You have just got one!”

Now the jackal couldn’t wait any more. He began running at full tilt.

The gibbon couldn’t keep his balance and fell off the jackal’s back. Furthermore, as their tails were tied, the gibbon got dragged behind the jackal. In an attempt to run away quickly, the jackal jumped downhill, but this move proved fatal for both of them. The gibbon and the jackal lost their steadiness and died after falling in the trench below.

Now Manmanjari felt relaxed as she felt her kids were safe and secure.